A New Take on Planet Formation

Figuring out how planets form is an old occupation, with the basic ideas of planetary accretion going back several centuries, though tuned up, to be sure, in the 1970s and tweaked ever since. In a disk of gas and dust orbiting a young central star, dust grains begin to clump together, eventually forming planetesimals. Accretion models assume that these small planetesimals bang into each other and gradually grow. The assumption is that in the inner system at least temperatures are hot and the era of planet formation occurs well after the central star has formed. 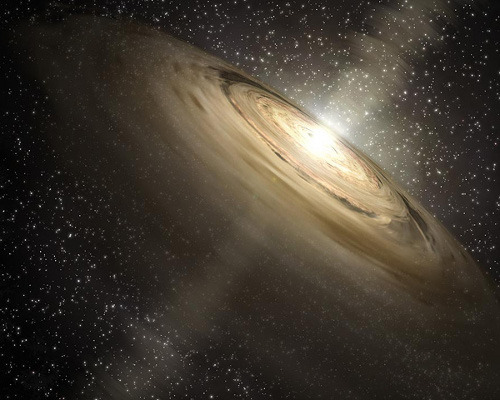 Adjust for distance from the star and subsequent planetary migration in the gas/dust disk and you can come up with a system more or less like ours, with rocky inner worlds and gas giants out beyond the snow line, the latter being the distance from the star where it is cool enough for volatile icy compounds to remain solid. But Anne Hofmeister and Robert Criss (Washington University, St. Louis) are presenting a new model, one in which the Sun and planets form at the same time, and at cold — not hot — temperatures. They argue that their model of a three-dimensional gas cloud explains planetary orbits better than earlier theories. Says Hofmeister:

“This model is radically different. I looked at the assumption of whether heat could be generated when the nebula contracted and found that there is too much rotational energy in the inner planets to allow energy to spill into heating the nebula. Existing models for planetary accretion assume that the planets form from the dusty 2-D disk, but they don’t conserve angular momentum. It seemed obvious to me to start with a 3-D cloud of gas, and conserve angular momentum. The key equations in the paper deal with converting gravitational potential to rotational energy, coupled with conservation of angular momentum.”

Inspiring the new theory was Hofmeister and Criss’ belief that older accretion models could not explain the fact that the planets orbit the Sun in a plane. The planet-building process would have been, after all, chaotic and haphazard, yet it leads to a Solar System demonstrating a large degree of order, with co-planar planetary orbits and axial spins that are for the most part upright. In the cold accretion model the researchers are advancing, a gravitational competition begins:

In other words, the model accounts for the gas giants by saying that rocky protoplanets far enough from the Sun would be able to attract nearby gas, volatiles and dust in ways the inner worlds could not. So the picture appears to be more or less like this: The slow contraction of the nebula that formed both the Sun and the planets allowed the simultaneous creation of both, with rocky protoplanets forming embedded in the dusty debris disk, which the authors believe accounts for their nearly circular co-planar orbits and upright axial spins. Those rocky planetesimals far from the accreting Sun were distant enough to form thick gaseous envelopes. As the pre-solar nebula collapsed, disk debris would have fallen toward the Sun, along the way heating whatever protoplanets it encountered as they in turn spun up as the cloud continued to shrink. The authors believe that this model, “…which allows for different behaviors of gas and dust, explains key Solar System characteristics (spin, orbits, gas giants and their compositions) and second-order features (dwarf planets, comet mineralogy, satellite system sizes).”

The paper is Hofmeister and Criss, “A Thermodynamic and Mechanical Model for Formation of the Solar System via 3-Dimensional Collapse of the Dusty Pre-Solar Nebula,” Planetary and Space Science Vol. 62, Issue 1 (March 2012), pp. 111-131 (abstract). A Washington University news release is available.