We recently looked at biosignatures as part of a discussion about using polarized light to examine exoplanet atmospheres. As if on cue, we now get a reminder of how carefully the biosignature hunt must proceed. It’s not enough, for example, to find one or two interesting gases in a distant atmosphere, for natural processes can account for potential biomarkers, which is why we need to find gases like ozone and methane, oxygen and carbon dioxide existing simultaneously. The most recent discovery from Cassini data puts an exclamation point on the matter with the discovery of molecular oxygen ions in the thin atmosphere of Dione, one of Saturn’s 62 moons.

With a radius of no more than 560 kilometers, Dione is evidently composed of a layer of water ice surrounding a rocky core. We are not, obviously, talking about a thick atmosphere around a world this small. Cassini and its CAPS instrument (Cassini Plasma Spectrometer) closed to within 503 kilometers of the surface in April of 2010, finding one oxygen ion for every 11 cubic centimeters of space in a gaseous envelope thin enough to be called an ‘exosphere.’ 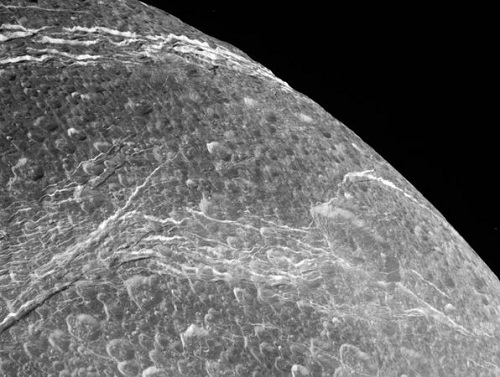 Robert Tokar (Los Alamos National Laboratory), lead author of the paper on this work, notes that the concentration of oxygen in Dione’s atmosphere is the equivalent of what we would find at an altitude of about 480 kilometers in Earth’s atmosphere. Adds Tokar:

“We now know that Dione, in addition to Saturn’s rings and the moon Rhea, is a source of oxygen molecules. This shows that molecular oxygen is actually common in the Saturn system and reinforces that it can come from a process that doesn’t involve life.”

The process is thought to work like this: During Dione’s 2.7-day orbit of Saturn, the moon is struck by charged particles produced by the planet’s inner magnetosphere, causing molecular oxygen ions to be displaced into the tenuous atmosphere, after which they are again stripped by the planet’s magnetosphere. The process of molecular oxygen displacement is called ‘sputtering,’ and while the paper notes some uncertainties in its calculations — surface temperature variations on Dione can be significant — it emphasizes the core finding:

…what is not uncertain is we report here the first in situ detection of a component of Dione’s thin sputter produced atmosphere by collecting the pick-up ions. Since the pick-up ion density is directly related to the atmospheric densities, we have also obtained a rough estimate of the atmospheric O2 density. This is consistent with the earlier observations of oxygen products trapped in the surface ice and places Dione in a category with Europa, Ganymede, Rhea and Saturn’s main rings all of which have oxygen atmospheres.

The exosphere around Rhea was detected in 2010 and is similar to Dione’s, with an oxygen density at the surface of some 5 trillion times less than what would be found at the Earth’s surface. Data from Cassini’s ion and neutral mass spectrometer from a later flyby are also under investigation. The Dione finding is not completely without interest for astrobiologists, given that molecular oxygen might be able to combine with carbon in the sub-surface lakes of gas giant moons like Europa.