Science Fiction and the Probe

Physicist Al Jackson, who is the world’s greatest dinner companion, holds that title because amongst his scientific accomplishments, he is also a fountainhead of information about science fiction. No matter which writer you bring up, he knows something you never heard of that illuminates that writer’s work. So it was no surprise that when the subject of self-replicating probes came up in these pages, Al would take note in the comments of Philip K. Dick’s story “Autofac,” which ran in the November, 1955 issue of H. L. Gold’s Galaxy. A copy of that issue sits, I am happy to say, not six feet away from me on my shelves.

This is actually the first time I ever anticipated Al — like him, I had noticed “Autofac” as one of the earliest science fiction treatments of the ideas of self-replication and nanotechnology, and had written about it in my Centauri Dreams book back in 2004. If any readers know of earlier SF stories on the topic, please let me know in the comments. In the story, the two protagonists encounter a automated factory that is spewing pellets into the air. A close examination of one of the pellets reveals what we might today consider to be nanotech assemblers at work: 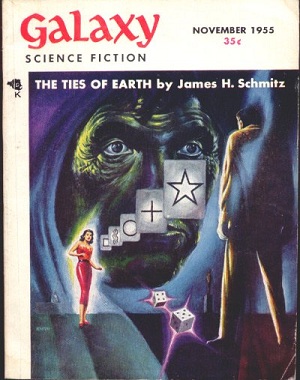 The pellet was a smashed container of machinery, tiny metallic elements too minute to be analyzed without a microscope…

The cylinder had split. At first he couldn’t tell if it had been the impact or deliberate internal mechanisms at work. From the rent, an ooze of metal bits was sliding. Squatting down, O’Neill examined them.

The bits were in motion. Microscopic machinery, smaller than ants, smaller than pins, working energetically, purposefully — constructing something that looked like a tiny rectangle of steel.

Further examination of the site shows that the pellets are building a replica of the original factory. O’Neill then has an interesting thought:

“Maybe some of them are geared for escape velocity. That would be neat — autofac networks throughout the whole universe.”

Just how ‘neat’ it would be remains to be seen, of course, assuming nanotech assemblers can ever be built and self-replication made a reality (an assumption many disagree with). Carl Sagan, working with William Newman, published a paper called “The Solopsist Approach to Extraterrestrial Intelligence” (reference below) that made a reasonable argument: Self-reproducing probes are too viral-like to be built. Their existence would endanger their creators and any species they encountered as the probes spread unchecked through the galaxy.

Sagan and Newman were responding to Frank Tipler’s argument that extraterrestrial civilizations do not exist because we have no evidence of von Neumann probes (it was von Neumann whose studies of self-replication in the form of ‘universal assemblers’ would lead to the idea of self-replicating probes, though von Neumann himself didn’t apply his ideas to space technologies). Given the time frames involved, Sagan and Newman argued, probes like this should have become blindingly obvious as they would have begun to consume a huge fraction of the raw materials available in the galaxy.

The reason we have seen no von Neumann probes? Contra Tipler, Sagan and Newman say this points to extraterrestrials reaching the same conclusion we will once we have such technologies — we can’t build them because to do so would be suicidal. Freeman Dyson, writing as far back as 1964, referred to a “cancer of purposeless technological exploitation” that should be observable. All of this depends, of course, on the assumed replication rates of the probes involved (Sagan and Newman chose a much higher rate than Tipler to reach their conclusion). Robert Freitas picked up on the cancer theme in a 1983 paper, but saw a different outcome:

A well-ordered galaxy could imply an intelligence at work, but the absence of such order is insufficient evidence to rule out the existence of galactic ETI. The incomplete observational record at best can exclude only a certain limited class of extraterrestrial civilisation – the kind that employs rapacious, cancer-like, exploitative, highly-observable technology. Most other galactic-type civilisations are either invisible to or unrecognisable by current human observational methods, as are most if not all of expansionist interstellar cultures and Type I or Type II societies. Thus millions of extraterrestrial civilisations may exist and still not be directly observable by us.

We need to talk (though not today because of time constraints) about what mechanisms might be used to put the brakes on self-replicating interstellar probes. For now, though, I promised a look at what the human encounter with such a technology would look like. Fortunately, Gregory Benford has considered the matter and produced a little gem of a story called “Dark Sanctuary,” which originally ran in OMNI in May of 1979 but is now accessible online. Greg told me in a recent email that Ben Bova (then OMNI’s editor) had asked him for a hard science fiction story, and von Neumann’s ideas on self-replicating probes were what came to mind. 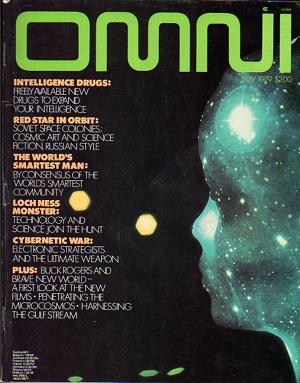 Mix this in with some of Michael Papagiannis’ notions about looking for unusual infrared signatures in the asteroid belt and you wind up with quite a tale. In the story, humans are well established in the asteroid main belt, which is now home to the ‘Belters,’ people who mine the resources there to boost ice into orbits that will take it to the inner system to feed the O’Neill habitats that are increasingly being built there. One of the Belters is struck by a laser and assumes an attack is underway, probably some kind of piracy on the part of rogue elements nearby. A chase ensues, but what the Belter eventually sees does not seem to be human:

I sat there, not breathing. A long tube, turning. Towers jutted out at odd places — twisted columns, with curved faces and sudden jagged struts. A fretwork of blue. Patches of strange, moving yellow. A jumble of complex structures. It was a cylinder, decorated almost beyond recognition. I checked the ranging figures, shook my head, checked again. The inboard computer overlaid a perspective grid on the image, to convince me.

I sat very still. The cylinder was pointing nearly away from me, so radar had reported a cross section much smaller than its real size. The thing was seven goddamn kilometers long.

“Dark Sanctuary” is a short piece and I won’t spoil the pleasure of reading it for you by revealing its ending, but suffice it to say that the issues we’ve been raising about tight-beam laser communications between probes come into play here, as does the question of what beings (biological or robotic) might do after generations on a starship — would they want to re-adapt to living on a planetary surface even if they had the opportunity? Would we be able to detect their technology if they had a presumed vested interest in keeping their existence unknown? Something tells me we’re not through with the discussion of these issues, not by a long shot.