I’ve held off a bit on the latest Kepler data release because I wanted some time to ponder what we’re looking at. The list of candidate planets here is based on data from the first sixteen months of the mission, and at first blush it seems encouraging in terms of our search for Earth-class planets. But dig deeper and you realize how much we still have to learn. Not all the trends point to the near ubiquity of rocky worlds in the habitable zone that some have hoped for. You might remember, for example, Carl Sagan famously saying (on ‘Cosmos’) that one out of every four stars may have planets, with two in each such system likely to be in the habitable zone.

Kepler’s Candidates and Some Qualifications

I remember being suitably agog at that statement, but we’ve learned more since. John Rehling, writing an essay for SpaceDaily, didn’t miss the Sagan quote and uses it to contrast with his own analysis of the new Kepler material showing that Earth-like planets may be considerably harder to find. Let’s talk about what’s going on here. A Kepler news release from February 28 breaks down the highlights. We find that the total count of Kepler planet candidates has reached 2321, with 1091 emerging in the new data analysis. Here we are dealing with 1790 host stars, and what caught everyone’s attention was this:

A clear trend toward smaller planets at longer orbital periods is evident with each new catalog release. This suggests that Earth-size planets in the habitable zone are forthcoming if, indeed, such planets are abundant.

Indeed, the Kepler catalog now holds over 200 Earth-size planet candidates and over 900 that are smaller than twice the Earth’s size, which makes for a 197 percent increase in this type of planet candidate (with planets larger than 2 Earth radii increasing at about 52 percent). 10 planets in the habitable zone (out of a total of 46 planet candidates there) are near Earth in size. We also learn that the fraction of host stars with multiple candidates has grown from 17 to 20 percent, and that improvements in the Kepler data analysis software are helping us identify smaller and longer period candidates at a faster than expected clip. So far, so good.

What John Rehling did was to go to work on two biases that affect the Kepler data set: 1) The Kepler data is more complete in regions close to the host star, which is reflected in the fact that over 90 percent of the observed candidates have shorter periods than Mercury; and 2) Because of the transit methodology used, larger planets are more readily observed than small ones. And here we note (see diagram) that most observed candidates are considerably larger than Earth. 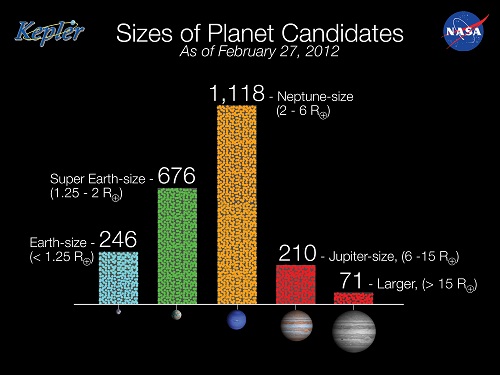 Rehling uses the two forms of bias to calculate a numerical de-bias factor, having put the observed candidates into bins based on radius and orbital period. From his essay:

Where the positive observations are significant in number, we can calculate the universal abundance of such planets. Where there have been few or no observations, we can use the de-bias factor to infer probabilistically a ceiling on the number of such worlds.

A similar approach by Wesley Traub used the data from the earlier four-month data release to calculate absolute frequencies and furthermore to extrapolate trends in planet radius and orbital period to project that about 34% of stars host an earth-sized planet in the habitable zone, a happy speculation for the future goal of finding truly earthlike planets as possible abodes for life.

A happy speculation indeed, but as adjusted for the new data release (Traub was working with bins with nothing longer than 50-day orbital periods), we can begin to tune up the accuracy. Even so, we should note that 16 months of observation isn’t enough to flag an Earth-like planet (remember, we need three transits, so to detect a true Earth analogue, we need 24 months of observation or more). We’re extrapolating, then, based on trends, and Rehling finds two trends at work in the new data, the first being that we see more Earth-size planets that are close to their stars, the second being that we see more giant planets located farther away from their stars.

The upshot: These trends are not favorable, because only the larger planets continue to increase in frequency as we move into the longer dataset, while the ‘super-Earth’ and Neptune-class candidates peak in frequency “at orbital periods roughly corresponding to the upper end of the four-month release’s window.” From the essay (italics mine):

Overall, we see that our solar system is qualitatively typical in placing larger planets farther out than smaller planets. However, it is quantitatively atypical: While Kepler shows us the happy result that there are almost certainly several planets for every star, it shows us that our solar system is distributed freakishly outwards, in comparison to more typical planetary systems.

In Rehling’s estimate (and you should read the entire essay, where he backs up his analysis with useful graphics), the frequency of Earth-like worlds is not Traub’s robust 34 percent but something closer to 0.7 percent. We can raise that a bit by extending the parameters (including bins surrounding Earth’s bin) and by including somewhat smaller planets, and what we then emerge with may get as high as 9 percent. And at the lower end, if Earth analogues are less abundant than 3 percent, then it’s possible we may find not a single one with Kepler.

What to make of this? The most obvious point is that the Kepler mission is ongoing, and that we need to see what the next data release brings. We’re still extrapolating as we gradually move the zone of detection outwards, gradually filling up the relevant bins. The second point is that given the vast number of stars in the galaxy, even with the much lower assessments of Rehling’s analysis, we may still be looking at hundreds of millions of habitable terrestrial planets.

But Rehling’s case is highly interesting in two directions. First, the kind of spectroscopic follow-ups we need to make on planet candidates are rendered more difficult by the distance of the Kepler stars from us. As we look toward future missions to characterize the atmospheres of terrestrial worlds, we’re going to need planets that are relatively close, but rarer ‘Earths’ means that such planets are farther apart than we’d like them to be. That has obvious implications as well for our favorite Centauri Dreams subject, future probes sent to nearby solar systems.

So perhaps we have to stay creative when it comes to habitable zones and astrobiology. We already know that M-class stars are the most common in the Milky Way by a huge margin (as many as 80 percent of all stars may fit this class). Here we’re not talking about an Earth analogue, but planets at the right distance from M-dwarfs may be habitable despite the problems of tidal lock and solar radiation. Then too, we can consider that if most solar systems really are compressed toward the star, there may be many gas giants in the habitable zone of stars like our Sun and into the K-class. Here we have the possibility of habitable conditions on moons.

G-class stars like our Sun are not themselves all that common — I believe that about 3.5 percent of all stars fit the bill. But K-class stars like Centauri B are also in the picture (8 percent) along with the above-mentioned red dwarfs, and we are steadily finding out more about the variety of planetary system configurations around such stars. Rehling notes, too, that as more Kepler data become available, the frequency of planets as a function of orbital period may show a second peak. No one is saying that we are finished with Kepler, not by a long shot. What we are trying to do is to draw the maximum amount of information out of what we do have. What will the terrestrial planet outlook be after Kepler’s next release?