Starships: The Problem of Arrival

You wouldn’t think that slowing down a starship would be the subject of a totally engrossing novel, but that’s the plot device in Poul Anderson’s Tau Zero (1970, though based on a 1967 short story called “To Outlive Eternity”). Anderson’s ramscoop starship, the Leonora Christine, can’t slow down because of damage suffered in mid-cruise. Edging ever closer to the speed of light, the crew experiences all sorts of time dilation wonders as they wrestle to regain control, and the ending, while scientifically dubious, is also in every way unforgettable. Anderson could be guilty of over-writing but few writers are gifted with his sheer imaginative sweep.

I’m thinking that coupling a ramscoop with a problem in deceleration is just the ticket for getting into the whole issue of starship arrivals. We can start with Robert Bussard’s 1960 paper “Galactic Matter and Interstellar Spaceflight,” which unwittingly paved the way for the whole magsail concept. Bussard came up with what for a time appeared to be the ultimate in fast transportation, a ramjet that collected interstellar hydrogen in an electromagnetic scoop thousands of kilometers in diameter as it traveled. The collected hydrogen would be used as fuel for the same kind of proton/proton fusion that powers up the Sun. Moreover, this would be an engine that would become more efficient the faster the ship went.

The Ramscoop and the Details

No wonder writers like Anderson and Larry Niven loved the idea, which fed their plots of humanity expanding into the galaxy — even Carl Sagan would point to the Bussard ramjet as a propulsion system that could get us up to a substantial percentage of the speed of light. But in the case of the ramjet, at least one of the devils in the details turned out to be bremsstrahlung radiation, which is produced when charged particles decelerate. Thomas Heppenheimer went to work on this in 1978 and found the Bussard design unworkable because the power that could be produced was dwarfed by the losses from the bremsstrahlung process. 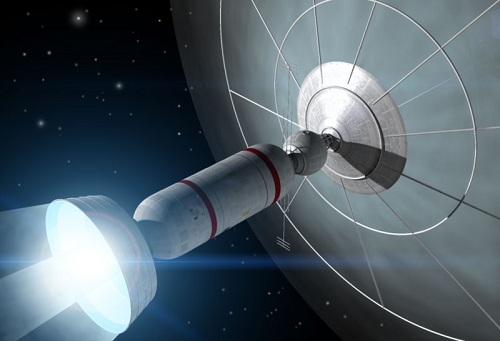 Image: The Bussard ramjet, a concept which may turn out to have more applicability in braking than acceleration. Credit: Adrian Mann.

This wasn’t the end of the ramjet concept because Daniel Whitmire was able to figure out a different way to power up the engine (and in the future we’ll have to talk about Whitmire and his study of the CNO cycle, which makes for a much more powerful and efficient fusion engine), but the most troublesome critique emerged in 1985 through the work of Dana Andrews and Robert Zubrin. Bussard assumed an electromagnetic scoop of vast proportions, but Andrews and Zubrin came to realize that such a scoop produced more drag than it did thrust. In fact, their work showed that when leaving a star system, a ramscoop could serve as an electromagnetic sail. Thus the magsail entered into the lexicon and we began pondering its uses.

If we can’t use Bussard ramjet techniques in cruise, why not use them upon arrival? Switch on the magsail as the vehicle approaches its destination solar system and let it use the star’s stellar wind to brake against. The magsail produces efficient deceleration at high velocities, but an incoming spacecraft could also deploy a conventional solar sail upon arrival for final braking and movement within the planetary system. Magsails could also be used to provide the mission’s initial acceleration, pushed by a particle beam or by a stream of incoming pellets turned into plasma — Gerald Nordley has explored this concept and others germane to our purposes here.

Now we’re talking hybrid approaches to interstellar propulsion. A spacecraft might achieve its initial acceleration, for example, through other forms of fusion, or perhaps through beamed microwave or laser sail technologies, while deploying the magsail for arrival. Get into the details and hybrid systems begin to make sense, because there is nothing that says you have to use the same technologies for interstellar braking as you do for the rest of the journey. But the great problem of deceleration looms over the entire topic of interstellar travel, and it behooves us to think of ways to take advantage of external braking possibilities wherever possible, unless we want to devote most of the bulk of our spacecraft to an onboard deceleration system and its fuel.

I was interested to see that John Mathews considered the deceleration question in his recent paper on self-replicating spacecraft (see Robotic Networks Among the Stars and the subsequent three entries here). Mathews is well acquainted with magsail concepts and advocates braking against the stellar wind, noting that solar sails are efficient only relatively close to the star. Where he moves us a step forward is in his idea of using electrodynamic tether technologies to generate huge amounts of energy from the spacecraft’s movement through the stellar wind, powering the magsail itself and offering options for driving other devices.

The comparison of solar to magnetic sail in terms of decelerating a spacecraft is one we have to get into at more depth, so we’ll continue the deceleration discussion on Monday and most of next week, for it turns out that magsail and solar sail braking are only two of the options we might consider. I want to go through all of these and offer some references for an area of the interstellar conundrum that doesn’t often get the attention it deserves. Project Icarus has been pondering deceleration options too, and I’ll use some of our synergy with their work to consider what might be done.

The Bussard paper mentioned above is “Galactic Matter and Interstellar Spaceflight,” Astronautica Acta 6 (1960), pp. 179-194. Andrews and Zubrin’s key paper on the Bussard ramjet and drag is “Magnetic Sails and Interstellar Travel,” International Astronautical Federation Paper IAF-88-5533 (Bangalore, India, October 1988). Or you can read Zubrin’s well written exposition of all this in Entering Space: Creating a Spacefaring Civilization (New York: Tarcher/Putnam, 1999). This one should be on your shelf in any case.