Century of the Starship

I once thought about putting together a collection of classic papers on interstellar flight. It would start with early work by the likes of Les Shephard, Eugen Sänger and Carl Wiley (whose groundbreaking paper on solar sails appeared not in a scientific journal but in Astounding Science Fiction). The book would proceed with the key papers of Forward, Bussard and Dyson and move into papers from the Project Daedalus report, then to Matloff and Mallove and up to the present day, with a long look at the Italian solar sail work of Vulpetti, Maccone and Genta. Especially later in this period there is abundant material to choose from, and there’s Alcubierre to consider, and Millis’ work with the Breakthrough Propulsion Physics project.

And then there’s Geoff Landis and Robert Frisbee and the closely reasoned sociological analyses of Michael Michaud and… Well, you can see what happens when you start pondering editing possibilities. The book is already growing to enormous size and I’ve done no more than sketch out the basic parameters. A book like this would also do well to include some science fiction, which has energized so many scientists as they ponder making their concepts real. A hybrid anthology — scientific papers mixed with science fiction — is a rare beast, though as we’ll see in a minute, it’s been done before. 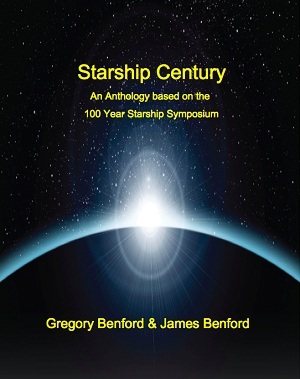 I’m glad to see that Jim and Gregory Benford think it’s time to do it again, in the form of a new anthology based on the discussions at the 100 Year Starship Symposium in Orlando. Starship Century is to be the title, and the idea is to examine the ideas of current leading figures in interstellar studies — Robert Zubrin, Jill Tarter, Martin Rees, Paul Davies and many of those I’ve already listed above — in light of the latest developments. The 100 Year Starship Symposium is a natural trigger for this book, exploring as it did how a civilization expands into its solar system, developing the needed tools of interplanetary communications and propulsion as, in the words of Jim Benford, it “…focuses outward for its own evolution.” Into the mix will be science fiction from Steven Baxter, Nancy Kress, Allen Steele, Joe Haldeman and others.

“The anthology theme is the development of starships as a key inspiring goal for future interplanetary technologies, leading to the ability to build the first starships within a century,” says Gregory Benford, an award-winning science fiction author and physicist. “It addresses how future growth of an interplanetary economy can occur, leading to starships.”

Starship Century will mix the fiction and the science in equal measure in a volume slated to go on sale in about a year, with additional contributors to be announced in coming months. Unlike my solely hypothetical anthology, this one will collect not historical papers but state-of-the-art science. Those of us who had the privilege of being at the conference — and I think there were a couple of thousand all told — will look forward to seeing some of the remarkable talent that appeared there pushing the discussion forward in this new venue. Although what I once described as the ‘interstellar buzz’ of the symposium has cooled a bit since then, we’re still seeing more activity across the spectrum of interstellar studies than at any time in my memory.

I mentioned above how unusual it is to have anthologies that mix science with science fiction, but there are two exceptions that quickly prove the rule. The first is a volume edited by Arthur C. Clarke called Project Solar Sail (New York: Roc, 1990). This chunky paperback should be on your shelf, containing as it does fiction by David Brin, Clarke himself (“The Wind from the Sun”), Larry Niven and others as well as papers by Eric Drexler, Robert Forward and Louis Friedman. There’s the obligatory nod to Tennyson (“Saw the heavens filled with commerce / Argosies of magic sails”) and a longer attempt at sail poetry by Ray Bradbury and Jonathan V. Post.

We also have a book called Going Interstellar, edited by MSFC’s Les Johnson and science fiction writer Jack McDevitt, coming up for publication in May, and although I don’t have the contents list, I do know this one is also going to mix essays by space scientists and engineers with science fiction from a variety of authors. We have much to look forward to in the coming year or so as the echoes of the 100 Year Starship Symposium continue to resonate, and the hope here is that the synergy between science and science fiction that animates Starship Century reflects a growing public enthusiasm for our prospects in the Solar System and beyond.

Next post: A Brief Window: The Bussard Ramjet in the 1960s