Catalyzed Fusion: Tuning Up the Ramjet

Long-time Centauri Dreams readers have learned to tolerate my eccentricities (or, at least, they’re kind enough not to dwell on them). One of them is my love of poking around in old books related to space travel, which is how Benjamin Field’s A Narrative of the Travels and Adventures of Paul Aermont Among the Planets (1873) recently caught my eye. I don’t know much about Field other than that he chose to produce this tale of interplanetary wanderings under a pseudonym, but what’s fun about his tale is that after his journeys to Jupiter, Saturn, Mars and Venus are over, Field’s protagonist returns to Earth to find that the planet is fully fifty years older, though he himself has aged hardly at all. 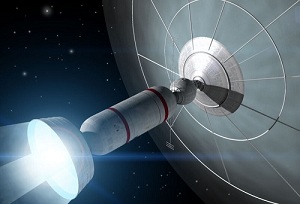 Time dilation, the reader might say, but of course Field wouldn’t have known anything about special relativity. It’s fun to consider, though, how an idea that in 1873 would have been simple fantasy — that someone might travel at high speed and age at a different rate than those he left behind — became in 1905 the logical outgrowth of a breakthrough theory and, by the 1960s, a publicly accepted concept. As we saw yesterday, the propagation of Robert Bussard’s interstellar ramjet ideas, first through scientific papers, then through accounts of popular science and eventually science fiction (think Poul Anderson, or Larry Niven), fueled the public imagination. We’d had relativistic effects in science fiction before (as far back as 1931’s Out Around Rigel, by Robert H. Wilson), but the ramjet gave the idea its vehicle.

Image: The Bussard ramjet ushered in an era of public enthusiasm for relativistic flight concepts, along with a host of unresolved issues. Credit: Adrian Mann.

I haven’t mentioned the name of British researcher Anthony Martin in this context yet, but Martin, a major player in the Project Daedalus work in the 1970s, examined Bussard’s ideas early in that decade and saw the possibilities of the ramscoop for deceleration. He was hardly alone in going to work on the many problems of the ramjet. Bussard spoke about fusing protons in his ramscoop engine, but subsequent analysis showed that the power needed to compress protons to fusion densities far outweighed the power that would be produced — Thomas Heppenheimer went on to demonstrate this in a 1978 paper. But three years before this, Daniel Whitmire had studied how a ramjet could draw its power through the much more energetic CNO bi-cycle (carbon-nitrogen-oxygen), a catalytic cycle that seems to be the dominant energy source in stars more than 1.3 times the mass of the Sun. Thus the ‘catalytic ramjet’ was born.

Adam Crowl describes the CNO bi-cycle this way in a recent post:

Basically a hydrogen fuses to a carbon-12, then another is fused to it to make nitrogen-14, then two more to make oxygen-16, which is then highly ‘excited’ and it spits out a helium nucleus (He-4) to return the nitrogen-14 back to carbon-12. Since the carbon-12 isn’t consumed it’s called a “catalytic” cycle, but it’s not chemical catalysis as we know it. Call it “nuclear chemistry”.

Whitmire was a friend and colleague of Al Jackson, a physicist (and these days a Centauri Dreams regular) who collaborated with Whitmire on still another ramjet idea we’ll be discussing soon, a ramjet/laser hybrid. Tomorrow I’ll be running a reminiscence by Al about Whitmire’s work on the catalytic ramjet, along with some thoughts from a letter Bussard himself wrote to Whitmire. For today, though, we focus on catalytic fusion, in which 12C or 20Ne (isotopes of carbon and neon respectively) are the fusion catalysts. Whitmire worked through reaction sequences for each and found that given sufficient temperatures, the reaction rates were far higher than for uncatalyzed proton/proton fusion (in fact, 1018 to 1019 times higher).

The problem with Bussard’s original idea is that the rate of proton-proton fusion is low. Consider that the Sun generates something less than 1 watt per cubic meter as averaged over its whole volume, considerably weaker than the energy production taking place in a light bulb filament. We get huge energy output because the Sun is vast, occupying a volume more than one million times that of Earth. The need for something more energetic aboard the relatively limited confines of the Bussard starship was clear. Either that or the ship would grow huge: Whitmire calculated that if a working proton-proton reactor were built around Bussard’s ideas, it would have to be on the order of 7000 kilometers across, making for one gigantic vehicle! As Whitmire wrote:

This problem was recognized in Bussard’s original work, but no viable alternative to the PPI [proton-proton] chain has yet been suggested. Here we show that the problem of the slow PPI rate can be resolved in principle by exploiting a proton burning catalytic cycle similar to the well known CNO BiCycle occurring in sufficiently hot main sequence stars. The catalyst “fuel” can be taken along since it is not depleted, but the ultimate source of energy is the interstellar hydrogen. The slowest links in the catalytic chains will be found to be 1018 – 1019 times faster than the PPI rate at an ion temperature of 86 keV and number density of 5 x 1019 cm-3.

We should note that Bussard was impressed with Whitmire’s work and saw catalytic fusion as the solution to the proton-proton problem, a point he makes in the letter I’ll be quoting tomorrow. Even so (and Gregory Matloff makes this point in The Starflight Handbook), these reactions are about a million times slower than the deuterium-deuterium reaction, so ramjet fusion remains more than a little problematic.

There are numerous issues with the Bussard ramjet, and Whitmire would go on to look at how interstellar ions could be collected through the combination of electric and magnetic fields, with the ramscoop’s efficiency enhanced by firing laser beams to ionize hydrogen atoms ahead of the vehicle (Matloff and A.J. Fennelly were working on forward-firing lasers for ramjets at more or less the same time). We’ve seen as well how Robert Zubrin and Dana Andrews analyzed the ramjet and found its scoop actually created more drag than thrust, but there are those who continue to study it, believing with Whitmire that “…it would be premature to discount the fusion ramjet as a potentially viable means of relativistic interstellar spaceﬂight, especially for technological civilizations within or sufficiently close to nebular regions of the galaxy.”

Previous post: A Brief Window: The Bussard Ramjet in the 1960s