Red dwarfs are all over the news thanks to an announcement by the European Southern Observatory. Results from a new HARPS study show that tens of billions of planets not much larger than Earth are to be expected in the habitable zones around this class of star. The finding reinforces the growing interest in M-class stars and becomes especially interesting when you realize that faint red stars like this make up as much as 80 percent of the stars in the Milky Way. That leaves plenty of room for astrobiology, depending on factors we need to discuss below.

Do we suddenly have a close destination for a potential interstellar probe? Well, Barnard’s Star has always been in the running for an early mission because of its relative proximity to us at 5.94 light years. But we still have no word on planets there (despite a much publicized but soon discredited set of observations from a 1969 paper). Proxima Centauri is available at 4.2 light years, but we have yet to learn whether it has planets. And as far as anything closer, a source on the WISE team passes along the information that no new red dwarfs have been discovered, as of yet, within 10 light years, though of course the WISE results are still under heavy analysis. 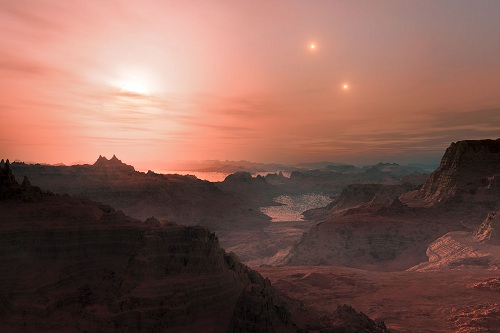 Image: This artist’s impression shows a sunset seen from the super-Earth Gliese 667 Cc. The brightest star in the sky is the red dwarf Gliese 667 C, which is part of a triple star system. The other two more distant stars, Gliese 667 A and B appear in the sky also to the right. Astronomers have estimated that there are tens of billions of such rocky worlds orbiting faint red dwarf stars in the Milky Way alone. Credit: ESO/L. Calçada.

But back to the ESO announcement, which focuses on results obtained with the HARPS spectrograph at La Silla. Let me quote Xavier Bonfils (Institut de Planétologie et d’Astrophysique de Grenoble) directly on this:

“Our new observations with HARPS mean that about 40% of all red dwarf stars have a super-Earth orbiting in the habitable zone where liquid water can exist on the surface of the planet. Because red dwarfs are so common — there are about 160 billion of them in the Milky Way — this leads us to the astonishing result that there are tens of billions of these planets in our galaxy alone.”

What the work comes down to is a survey of 102 M-class stars studied over a period of six years, in which nine super-Earths with masses up to ten times that of Earth were found. 460 hours of observing time went into the mix, with 1965 radial velocity measurements made between 2003 and 2009. Interestingly, more massive planets like Jupiter and Saturn turn out to be rare around such stars, with fewer than 12 percent of them expected in M-dwarf systems. From all this, the team thinks that there should be about 100 super-Earth planets in the habitable zones of stars within about 30 light years of the Sun.

We can point to interesting worlds like Gliese 667Cc — discovered in the HARPS survey — as a promising preview of what is out there. This is a planet within a triple star system that is about four times the mass of the Earth and orbits close to the center of the habitable zone. But even assuming an abundance of super-Earths in conditions allowing liquid water on the surface, we still have the old M-class problems to contend with. A habitable world around such a small star needs to orbit close to it, leading to the potential for tidal lock and creating climate conditions that may not favor life. We also know that red dwarfs are frequently flare stars, creating unique evolutionary pressures on any life that does manage to emerge.

Xavier Delfosse (IPAG, Grenoble), another member of the team working the HARPS data, is lead author on one of two papers examining the results that have recently become available. The outlook on tidal locking is troubling but perhaps not a show-stopper for astrobiology, at least not if our own Solar System is any indication. Although a habitable M-dwarf planet is likely to be captured into a spin-orbit resonance, it will not necessarily be forced into synchronous rotation. From the paper (I’ve omitted internal references for brevity — the paper citations are below):

The ﬁnal equilibrium rotation of a tidally inﬂuenced planet depends on both its orbital eccentricity and the density of its atmosphere… Mercury, for instance, has been captured into the 3:2, rather than 1:1, spin-orbit resonance…, and Venus has altogether escaped capture into a resonance because thermal atmospheric tides counteract its interior tides… Whatever the ﬁnal spin-orbit ratio, the tidal forces will inﬂuence the night and day succession, and therefore the climate. As discussed above however, energy redistribution by an atmosphere at least as dense as that of the Earth is eﬃcient… and will prevent glaciation and atmospheric collapse on the night side.

And what about stellar flare activity? M-dwarfs are more active than G-class stars like the Sun, with the result that a planet in the habitable zone of a young M-dwarf takes a huge hit from X-ray and ultraviolet radiation, a period of irradiation 10 times longer than the approximately 100 million years that the Solar System dealt with similar activity on our star. How planetary atmospheres evolve under such conditions, and whether they can actually be stripped away by coronal mass ejections, are issues we haven’t as yet resolved. Digging into the Delfosse paper I find several points worth noting on the matter:

The paper summarizes the issue this way:

These diﬀerences imply that a planet in the habitable zone of an M dwarf is unlikely to be a twin of the Earth. Habitability however is not restricted to Earth twins, and Barnes et al. (2010) conclude that “no known phenomenon completely precludes the habitability of terrestrial planets orbiting cool stars.” A massive telluric planet, like Gl667Cc (M2.sin i = 4.25 M⊕), most likely has a massive planetary core, and as a consequence a stronger dynamo and a more active volcanism. Both factors help protect against atmospheric escape, and super-Earths may perhaps be better candidates for habitability around M dwarfs than true Earth-mass planets.

So there we are: Tens of billions of rocky planets in the habitable zones of red dwarfs, and perhaps 100 relatively near to the Sun, according to the estimates of these researchers. What we need to do now is increase the red dwarf planet inventory with future instruments made to order — state of the art near-infrared spectrographs that, in the authors’ estimate, should be able to identify between 50 and 100 planets in the habitable zones of M-dwarfs. That should be enough, even with a 2-3% transit probability, to find at least one transiting habitable world.