Tau Zero’s first graduate student project has been completed. Berkeley Davis, a 2nd Lt. at the United States Air Force Institute of Technology, Dayton Ohio, completed his Masters thesis on a deep space probe to perform Claudio Maccone’s gravitational lens mission (FOCAL). For those unfamiliar with FOCAL, it is a mission to utilize the gravitational lens effect that begins at approximately 550 AU from the Sun, one that in the view of Maccone will offer huge magnifications for the study of targets like the Cosmic Microwave Background. For more, see the Centauri Dreams archives.

To provide a realistic baseline on what is possible, the student was asked to constrain his design to commercially off-the-shelf technology. The mission involves taking a 12 m diameter radio telescope beyond 550 Astronomical Units (AU), continuing outward thereafter, to examine the gravitational lensing of our own Sun. A secondary mission, which occurs before that point, is to measure the magnetic fields, particles, and dust while traveling through our Solar System and the transition through the edge of our Solar System (the termination shock, the heliosheath, heliopause) and into true interstellar space. 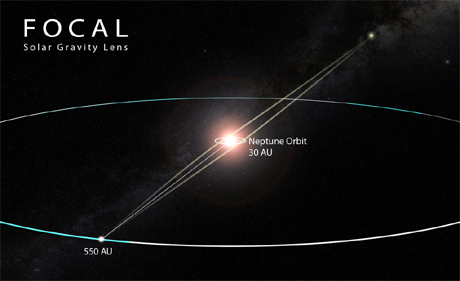 Image: Beyond 550 AU, we can start to take advantage of the Sun’s gravitational lens, which may allow astrophysical observations of a quality beyond anything we can do today. Credit: Adrian Mann.

In short, it is found that this mission could be performed with EXISTING technology for roughly $3B-$5B (FY 2011 dollars), and that it would take roughly 34 years to reach the edge of our Solar System, and roughly 110 years to reach its primary mission point of 550 AU, and continuing thereafter for almost 80 years of data taking until the spacecraft reaches about 1000 AU, where it will have likely exceeded its 2-century life-time projection.

Using those goals and constraints, the student designed a two-stage vehicle that is delivered into orbit by a “Delta IV-H/Star48/Star37” launcher. The 1st stage, which has a 22 kW solar array, uses four “NEXT” ion thrusters to propel the vehicle from Earth orbit to Jupiter while thrusting almost constantly in a spiral trajectory for 17 years.

At Jupiter that boost stage is jettisoned, and the main stage completes a Jupiter gravity assist. The main stage also includes four “NEXT” ion thrusters powered by 20 Radioisotope Thermal Generator (RTGs) which have roughly 4.4 kW at this point in the mission. The spacecraft thrusts continuously for roughly another 17 years until the propellant runs out at roughly 90 AU. At this point its velocity is 6.7 AU/yr which is almost twice the speed of Voyager (3.6 AU/yr).

For the next 20 or so years it coasts through the border between our Solar System and true interstellar space, taking data for the secondary mission. Then after about 55 more years, it reaches 550 AU, the closest point where gravitational lensing would ideally begin. By this point its velocity has slowed to 6.2 AU/yr. It takes another 12 years to reach 625 AU, which is the closest predicted for observable signals at the focal point. The spacecraft will continue coasting outward for the next 60 years and will be able to continue taking data (observations of our Sun’s gravitational lensing) until the spacecraft passes 1000 AU roughly 180 years after launch. Provisional estimates of the number of cycles of the attitude control system, processor, etc, suggest that this vehicle might function for 2-centuries.

The thesis also made the following recommendations:

– Since spacecraft power is the most limiting technological factor at this time, that should be the focus of next-step research for interstellar missions.

– To complete such missions with RTGs, the production of Plutonium-238 would have to fully resume.

– Mission durations are longer than practical for on-Earth life tests, so novel testing techniques will need to be created to ensure the spacecraft will still be functioning by the time it reaches its interstellar mission location.

– Note: Mission uses about 10% of total annual Xenon production – Xenon which will not return to Earth.

This study was merely a first-cut at examining these possibilities, and these findings should not be considered the last work on this specific topic.