Planets Around an Ancient Star

The idea of ‘deep time’ exerts an abiding fascination. H.G. Wells took us forward to a remote futurity when his time traveler looked out on a beach dominated by a red and swollen Sun. But of course deep time goes in the other direction as well. I can remember wanting to become a paleontologist when I discovered books about the world of the dinosaurs, my mind reeling from the idea that the world these creatures lived in was as remote as any distant star. Paleontology was a grade-school ambition I never followed up on, but the Triassic and Jurassic eras still have a hold on my imagination.

In a SETI context, deep time presents challenges galore. Charles Lineweaver’s work offers up the prospect that the average Earth-like planet in our galactic neighborhood may well be far older than our own — Lineweaver calculates something like an average of 1.8 billion years older. Would a civilization around such a star, if one could survive without destroying itself for so long, have anything it wanted to say to us? Would it have evolved to a level where it had merged so completely with its environment that we might not be able to recognize its artifacts even if we saw them?

All these musings were triggered by the news from the Max-Planck-Institut für Astronomie (Heidelberg) that European astronomers have discovered a planetary system that is truly ancient. The star in question is HIP 11952, about 375 light years from Earth in the constellation Cetus. Not surprisingly, given its estimated age of 12.8 billion years, it is extremely metal poor, but two giant planets are now known to orbit it. Says Johny Setiawan (MPIA), who led this work:

“This is an archaeological find in our own backyard. These planets probably formed when our Galaxy itself was still a baby.”

The planets around HIP 11952, which have orbital periods of 7 and 290 days, thus present us with a challenge. Elements heavier than hydrogen and helium are what astronomers consider ‘metals,’ and we’ve seen through our ongoing analysis of exoplanets that stars with higher metal content are more likely to have planets. We also have a mechanism for metal formation in which heavier elements are produced inside stars and blown into space through the explosion of supernovae. That a star as old as HIP 11952 should have planets would seem to be a rare thing indeed, but we do have another metal-poor system around HIP 13044, discovered back in 2010.

There is no doubt about the low metallicity of HIP 11952, which has an iron abundance approximately 1 percent that of the Sun. This is a population II star, one of the class that includes the oldest and most metal-poor stars that have yet been observed. Our own solar neighborhood is comparatively metal-rich and contains stars younger than 10 billion years. It’s an interesting speculation (followed up in this expanded news release from MPIA) that HIP 11952 may be a remnant from another galaxy that was absorbed by the Milky Way billions of years ago. 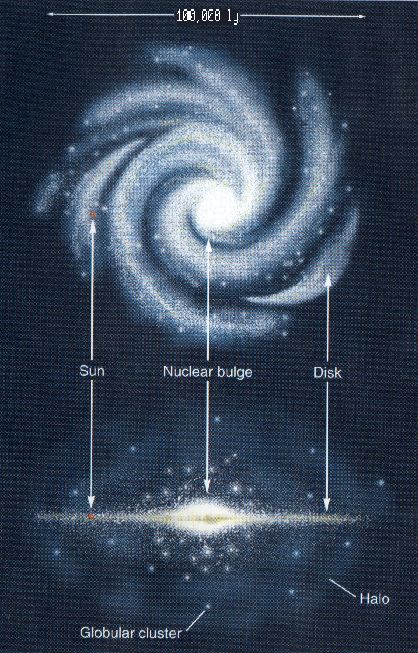 Image: Population II stars tend to have orbits that take them outside the plane of the galactic disk, and are often associated with globular clusters and the galactic halo, a roughly spherical distribution which contains the oldest stars in the Galaxy. Because of their age, most of them consist of almost pure hydrogen and helium, unenriched by earlier generations of stars. Credit: UCSD Center for Astrophysics & Space Sciences.

Are there, then, more planets around metal-poor stars than we have previously thought? We need to find more planetary systems in this age bracket to learn more, but Anna Pasquali (Heidelberg University), a co-author of the paper on this work, says “The discovery of the planets of HIP 11952 shows that planets have been forming throughout the life of our Universe,” a thought that reminds us to be careful about drawing hasty conclusions about planet formation. Don’t be surprised, either, if the idea doesn’t once again bring Dr. Fermi knocking at the door.