Reasons for a Human Future in Space

I closed last week with two posts about the AVIATR mission, an unmanned airplane that could be sent to Titan to roam its skies for a year of aerial research. It’s a measure of Titan’s desirability as a destination that it has elicited so many mission proposals, and I want to get into the Titan Mare Explorer (TiME) as well, but let’s pause a moment to consider the nature of what we’re doing. Out of necessity, all our missions to the outer system have been unmanned, but as we learn more about long-duration life-support and better propulsion systems, that may change. The question raised this past weekend in an essay in The Atlantic is whether it should.

Ian Crawford, a professor of planetary sciences at Birkbeck College (London) is the focus of the piece, which examines Crawford’s recent paper in Astronomy and Geophysics. It’s been easy to justify robotic exploration when we had no other choice, but Crawford believes not only that there is a place for humans in space, but that their presence is indispensable. All this at a time when even a return to the Moon seems beyond our budgets, and advanced robotics are thought by many in the space community to be the inevitable framework of all future exploration.

But not everyone agrees, even those close to our current robotic missions. Jared Keller, who wrote The Atlantic essay, dishes up a quote from Steve Squyres, who knows a bit about robotic exploration by virtue of his role as Principal Investigator for the Spirit and Opportunity rovers on Mars. Squyres points out that what a rover could do even on a perfect day on Mars would be the work of less than a minute for a trained astronaut. Crawford accepts the truth of this and goes on to question what robotic programming can accomplish:

Landing astronauts is something we’ve only done on the Moon, but the value of the experience is clear — we’ve had human decision-making at work on the surface, exploring six different sites (some of them with the lunar rover) and returning 382 kilograms of lunar material. The fact that we haven’t yet obtained samples from Mars doesn’t mean it’s impossible to do robotically, but a program of manned exploration clearly points to far more comprehensive surface study. Crawford points out that the diversity of returned samples is even more important on Mars, which is more geologically interesting than the Moon and offers a more complicated history. 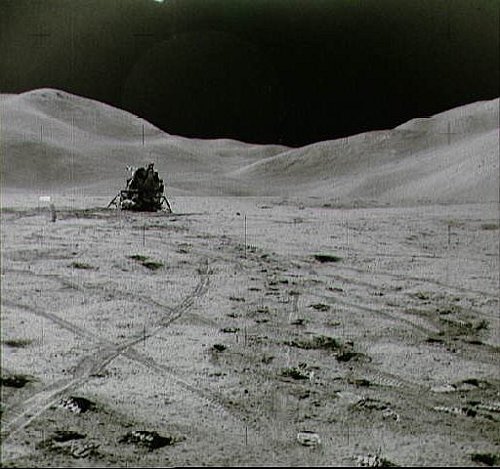 Image: Apollo 15 carried out 18.5 hours of lunar extra-vehicular activity, the first of the “J missions,” where a greater emphasis was placed on scientific studies. The rover tracks and footprints around the area give an idea of the astronauts’ intense activity at the site. Credit: NASA.

Sending astronauts by necessity means returning a payload to Earth along with intelligently collected samples. From Crawford’s paper:

Robotic explorers, on the other hand, generally do not return (this is one reason why they are cheaper!) so nothing can come back with them. Even if robotic sample return missions are implemented, neither the quantity nor the diversity of these samples will be as high as would be achievable in the context of a human mission — again compare the 382 kg of samples (collected from over 2000 discrete locations) returned by Apollo, with the 0.32 kg (collected from three locations) brought back by the Luna sample return missions.

It’s hard to top a yield like that with any forseeable robotic effort. Adds Crawford:

The Apollo sample haul might also be compared with the ≤ 0.5 kg generally considered in the context of future robotic Mars sample return missions… Note that this comparison is not intended in any way to downplay the scientific importance of robotic Mars sample return, which will in any case be essential before human missions can responsibly be sent to Mars, but merely to point out the step change in sample availability (both in quantity and diversity) that may be expected when and if human missions are sent to the planet.

Large sample returns have generated, at least in the case of the Apollo missions, huge amounts of refereed scientific papers, especially when compared to the publications growing out of robotic landings. Crawford argues that it is the quantity and diversity of sample returns that have fueled the publications, and points out that all of this has occurred because of a mere 12.5 days total contact time on the lunar surface (and the actual EVA time was only 3.4 days at that). Compare this to the 436 active days on the surface for the Lunokhods and 5162 days for the Mars Exploration Rovers. Moreover, the Apollo publication rate is still rising. Quoting the paper again:

The lesson seems clear: if at some future date a series of Apollo-like human missions return to the Moon and/or are sent on to Mars, and if these are funded (as they will be) for a complex range of socio-political reasons, scientists will get more for our money piggy-backing science on them than we will get by relying on dedicated autonomous robotic vehicles which will, in any case, become increasingly unaffordable.

Will the Global Exploration Strategy laid out by the world’s space agencies in 2007 point us to a future in which international cooperation takes us back to the Moon and on to Mars? If so, science should be a major beneficiary as we learn things about the origin of the Solar System and its evolution that we would not learn remotely as well by using robotic spacecraft. So goes Crawford’s argument, and it’s a bracing tonic for those of us who grew up assuming that space exploration meant sending humans to targets throughout our Solar System and beyond. That robotic probes should precede them seems inevitable, but we have not yet reached the level of artificial intelligence that will let robots supercede humans in space.

The paper is Crawford, “Dispelling the myth of robotic efficiency: why human space exploration will tell us more about the Solar System than will robotic exploration alone,” Astronomy and Geophysics Vol. 53 (2012), pp. 2.22-2.26 (abstract). Thanks to Joseph Kittle for calling this paper to my attention.

Previous post: A Closer Look at the Titan Airplane