Getting to the stars may involve a sudden breakthrough — we can’t rule out disruptive technologies, nor can we predict them — but my guess is that interstellar flight is going to be a longer, more gradual process. I can see a sort of tidal expansion into the outer system, forays to Mars, for example, followed by reassessment, retrenchment, then one day deeper study of Jupiter’s moons with advanced robotics that can get under Europa’s ice. The search for life may become so provocative that we have to explore Titan and Enceladus with human crews, and the imperative for planetary protection may help us further tune up our deep space technologies.

The thing is, one wave of exploration inevitably begets another. Let’s put no timeframe on that kind of expansion because, like the tides, it may surge at times and then fall back, hostage to budgetary problems and waves of public interest that can as easily ebb. But I could see an eventual civilization that extends throughout the Solar System and, in shaping its essential infrastructure, pushes its propulsion and life support systems to begin exploring out into the Kuiper Belt and beyond. This assumes that we keep doing what we can right now, with resources that are stretched thin but may still give us something like the AVIATR airplane on Titan, or perhaps an instrument package that can splash down in one of Titan’s seas.

We build the Solar System infrastructure one step at a time, and our robotic missions have given us a glimpse of what is waiting for us. Imagine the scientific return when we can begin sending human crews to some of the places so far glimpsed only by our probes! But the probes come first and the Titan Mare Explorer (TiME), which Johns Hopkins Applied Physics Laboratory (JHU/APL) champions, is a cost-capped $425 million mission concept that would parachute a robotic boat right into Ligeia Mare, the second largest of Titan’s northern seas. Active mission time on Titan would be 96 days, with a launch between 2016 and 2018 if TiME is chosen over two competing proposals as a NASA Discovery-class mission. We’ll know the answer to that later this year. 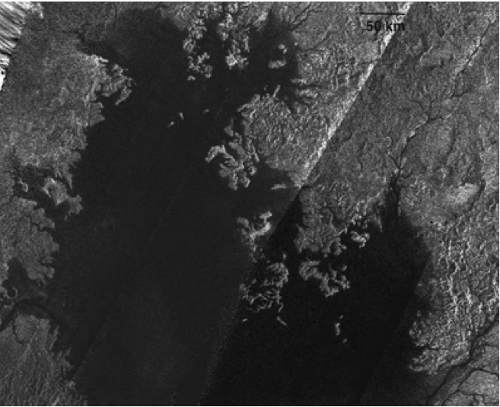 Every time we get a closer look at a distant world (think Cassini), we find compelling reasons to revisit the destination with ever more sophisticated technologies. Voyager and Galileo ramped up interest in Europa’s hidden ocean, and it’s likely that a Neptune orbiter would tell us things about Triton that might compel a future mission there. A major player in all this, of course, is the search for life, which makes Enceladus well nigh irresistible along with more likely targets.

As for Titan, it is already the site of the farthest landfall in human history, and it could now become the first place in which a probe lands in an alien sea. The interaction between liquid methane and ethane with Titan’s climate and weather patterns would be a prime area for study, but TiME would also look at the kind of complex organic chemistry that may be similar to what led to life’s formation on Earth billions of years ago. Says TiME project scientist Ralph Lorenz:

“These are disciplines that, to this point, have been strictly Earth science. How are heat and moisture exchanged between the ocean surface and atmosphere? How are waves generated? We have an opportunity to explore these processes in a completely different, alien environment.”

A 2009 presentation to the Decadal Survey by principal investigator Ellen Stofan (Proxemy Research) notes that the lakes and seas of Titan are probably at least tens of meters deep and may extend down beyond 100 meters, and they clearly play a major role in the overall methane cycle on the moon. Ethane has been detected in Ontario Lacus near the south pole, and the same lake shows changes to its shoreline over time that suggest seasonal effects. A key goal of TiME will be to examine the methane cycle and show its similarities and differences from the hydrologic cycle on Earth from the probe’s unique vantage point awash in Ligeia Mare.

Like AVIATR, the TiME mission would also offer a useful technology shakeout of the Advanced Stirling Radioisotope Generators (ASRGs) that would provide power for the probe, both in the deep space environment and in a non-terrestrial atmosphere. This first nautical exploration of an extraterrestrial sea could be providing science from Titan by 2023, including imagery from Ligeia Mare’s surface showing us clouds and rain moving across the moon’s orange skies. As I speculated last week, the choice of TiME would probably make the AVIATR airplane mission less likely to fly, given the inexorable logic of budgeting. We may be looking, then, at a choice between two compelling concepts to deepen our exploration of Saturn’s most intriguing moon.

Related: Planetary Lake Lander is an attempt to study these technologies right here on Earth, with implications for what could fly aboard the TiME mission. From Five Steps Toward Future Exploration, in Astrobiology Magazine:

The Planetary Lake Lander project is led by Principal Investigator Nathalie Cabrol of NASA Ames Research Center and the SETI Institute, and involves a three-year field campaign at Laguna Negra (Black Lagoon) in the Central Andes of Chile. Here the team will test mission scenarios and technologies for deploying a floating, robotic platform that can perform scientific studies remotely while swimming the waters of Laguna Negra. Ultimately, this work will pave the way for a lake lander mission to Saturn’s moon Titan. NASA has never attempted a lake landing before, so this field campaign is an essential first step in identifying the challenges that mission developers must contend with when they turn their sights toward the methane lakes of Titan.

You can follow the ongoing work of the Planetary Lake Lander project here. From the most recent blog entry (December 15, 2011), as the team prepared to return to the US, leaving the robotic device behind to monitor Laguna Negra:

Our plane takes off at 9:15 pm the following evening, and we are back in the US and home by 11:00 am on December 17. The morning air is clean and brisk, not unlike that of the lake, where for now, PLL is a reminder that we were there. It is logging data every hour and calling “home” (at NASA Ames) every evening, sharing more knowledge about melting glaciers and climate change. In a few months, it will be proactively monitoring the environment at Echaurren, as a precursor to what, maybe some day, another Lake Lander will do on Titan.

Previous post: Reasons for a Human Future in Space