The Largest Solar System Yet

The Kepler mission’s exoplanet discoveries have been so numerous that an extension of the mission seemed all but inevitable. At the same time, bureaucracies can be unpredictable, which is why it was such a relief to have the Senior Review of Operating Missions weighing in with an extension recommendation, one followed up by NASA with extensions not just for Kepler but also for the Spitzer telescope and the US portion of ESA’s Planck mission. Kepler’s extension runs through fiscal 2016 (subject to review in 2014), allowing for plenty of time to home in on Earth-sized planets in the habitable zone around stars like our Sun.

While Kepler’s scheduled mission duration was 3.5 years, the mission was intended to be extendible to 6 years or more and this news is more than satisfying. But of course while we continue to monitor the Kepler work, we’re following numerous other exoplanet stories including the European Southern Observatory’s observations of the prolific star HD 10180, a Sun-like star about 127 light years away in the constellation of Hydrus. The ESO work, performed with the HARPS spectrograph attached to the 3.6 meter telescope at La Silla in the Chilean Andes back in 2010, revealed the presence of at least five and possibly seven planets. Now astronomer Mikko Tuomi (University of Hertfordshire) has performed further data analysis on the HARPS radial velocity data, concluding that the system may contain as many as nine planets. 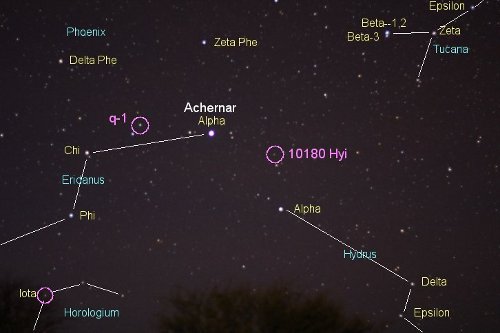 Image: The circle shows the location of the class G near-solar star HD 10180, which may be orbited by as many as nine planets. Credit: Jim Kaler/UIUC.

The two new worlds Tuomi’s work reveals range from 1.9 to 5.1 Earth masses respectively, allowing them to be classified as probable super-Earths with orbits of 10 and 68 days. If the findings are confirmed, this would make the HD 10180 system more fecund than our own, at least in terms of number of planets. Tuomi also reports he has verified the inner planet signature first announced in 2011, indicating a planet on a 1.18 day orbit with a minimum mass as low as 1.3 Earth masses. He has also revised the orbital parameters of the other six planet candidates around the star. Add it all up and you get nine planets. From the paper:

As noted by Lovis et al. (2011), the star is a very quiet one without clear activity-induced periodicities, which makes it unlikely that one or some of the periodic signals in the data were caused by stellar phenomena. Also, the periodicities we report, namely 9.66 and 67.6 days, do not coincide with any periodicities arising from the movement of the bodies in the Solar system. Therefore, we consider the interpretation of these two new signals of being of planetary origin to be the most credible explanation.

If this is borne out, then we have exceeded our Solar System’s planet count for the first time in exoplanet studies. The paper notes the need for additional high-precision radial velocity studies to confirm these findings. And we may not be through. There appear to be stable orbits for a low-mass companion in or near the habitable zone of HD 10180, one whose mass would be unlikely to exceed 12.1 Earth masses based on Tuomi’s samplings. All that should keep this star among our targets for some time to come as the data are mined for confirmation of these worlds.

The paper is Tuomi, “Evidence for 9 planets in the HD 10180 system,” accepted for publication in Astronomy and Astrophysics (preprint).