Lightsails: Safe Passage After All?

Despite my best intentions, I still haven’t put my hands on the exchange between Robert Forward and Ian Crawford on lightsails that ran back in 1986 in JBIS, nor have I managed to come up with the source of the ‘lightsail on arrival’ illustration I mentioned last week. This was the one showing a battered and torn sail docked in what I assume was a repair facility at the end of its long journey, and the effects of passage through the interstellar medium were all too obvious. It was a great image and I was frustrated about not being able to find the magazine it was published in, but an email from James Early quickly changed my mood.

As opposed to the missing image that nagged at my memory, this was a case of having missed something perfectly obvious in the first place. I didn’t know about the paper Jim did with Richard London on lightsails and the interstellar medium — it was published in the Journal of Spacecraft and Rockets back in 2000, but somehow I didn’t find it in the research for my Centauri Dreams book back then. It’s a welcome addition to the literature, one Jim went on to present to the 100 Year Starship Symposium in Orlando last fall. Jim tells me the presentation tracks the earlier paper, and I’ll draw today from the more recent paper as we look at lightsail concepts. 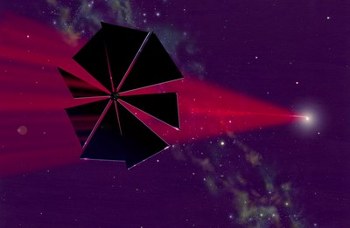 Although Robert Forward came up with sail ideas that pushed as high as 30 percent of the speed of light (and in the case of Starwisp, even higher), Early and London are content with 0.1 c, which provides technical challenges aplenty but at least diminishes the enormous energy costs of still faster missions, and certainly mitigates the problem of damage from dust and gas along the way. Lightsails will be slow to accelerate, given that the light absorbed by the sail creates a thermal limit on the maximum laser power usable. In short, we can’t heat the sail beyond a certain point, and that gives us a maximum acceleration, so our sail may take a tenth of a light year to get up to cruise velocity. It’s noteworthy that the sail does not have to be deployed during cruise itself, but deceleration at the target star, depending on the methods used, may demand redeployment.

Geoffrey Landis’ work on the different types of sails that are feasible seems to be the standard. Landis divides sails into three broad categories:

Early and London use beryllium sails as their reference point, these being the best characterized design at this stage of sail study, and assume a sail 20 nm thick.

The Sail and the Medium

In terms of the interstellar medium the sail will encounter, the authors say this:

Local interstellar dust properties can be estimated from dust impact rates on spacecraft in the outer solar system and by dust interaction with starlight. The mean particle masses seen by the Galileo and Ulysses spacecraft were 2×10-12 and 1×10-12g, respectively. A 10-12g dust grain has a diameter of approximately 1 µm. The median grain size is smaller because the mean is dominated by larger grains. The Ulysses saw a mass density of 7.5×10-27g cm-3. A sail accelerating over a distance of 0.1 light years would encounter 700 dust grains/cm2 at this density. The surface of any vehicle that traveled 10 light years would encounter 700 dust grains/mm2. If a significant fraction of the particle energy is deposited in the impacted surface in either case, the result would be catastrophic.

The question then becomes, just how much of the particle’s energy will be deposited on the sail? The unknowns are all too obvious, but the paper adds that neither of the Voyagers saw dust grains larger than 1 μm at distances beyond 50 AU, while a 1999 study on interstellar dust grain distributions found a flat distribution from 10-14 to 10-12 g with some grains as large as 10-11 g. Noting that a 10-12 dust grain has a diameter of about 1-μm, the authors use a 1-μm diameter grain for their impact calculations.

The results are intriguing because they show little damage to the sail. Catastrophe averted:

At the high velocities of interstellar travel, dust grains and atoms of interstellar gas will pass through thin foils with very little loss of energy. There will be negligible damage from collisions between the nuclei of atoms. In the case of dust particles, most of the damage will be due to heating of the electrons in the thin foil. Even this damage will be limited to an area approximately the size of the dust particle due to the extremely fast, one-dimensional ambipolar diffusion explosion of the heated section of the foil. The total fraction of the sail surface damaged by dust collisions will be negligible.

The torn and battered lightsail in its dock, as seen in my remembered illustration, may then be unlikely, depending on cruise speed and, of course, on the local medium it passes through. Sail materials also turn out to offer excellent shielding for the critical payload behind the sail:

Interstellar vehicles require protection from impacts by dust and interstellar gas on the deep structures of the vehicle. The deployment of a thin foil in front of the vehicle provides a low mass, effective system for conversion of dust grains or neutral gas atoms into free electrons and ions. These charged particles can then be easily deflected away from the vehicle with electrostatic shields.

And because the topic has come up recently in discussions here, let me add this bit about interstellar gas and its effects on the lightsail:

The mass density of interstellar gas is approximately one hundred times that of interstellar dust particles though this ratio varies significantly in different regions of space. The impact of this gas on interstellar vehicles can cause local material damage and generate more penetrating photon radiation. If this gas is ionized, it can be easily deflected before it strikes the vehicle’s surface. Any neutral atom striking even the thin foil discussed in this paper will pass through the foil and emerge as an ion and free electron. Electrostatic or magnetic shields can then deflect these charged particles away from the vehicle.

All of these findings have a bearing on the kind of sail we use. The thin beryllium sail appears effective as a shield for the payload, with a high melting point and, the authors conclude, the ability to be increased in thickness if necessary without increasing the area damaged by dust grains. Ultra-thin foils of tantalum or niobium offer higher temperature possibilities, allowing us to increase the laser power applied to the sail and thus the acceleration. But Early and London believe that the higher atomic mass of these sails would make them more susceptible to damage. Even so, “…the level of damage to thin laser lightsails appears to be quite small; therefore the design of these sails should not be strongly influenced by dust collision concerns.”

The third type of sail, the thicker dielectric sail, is more problematic, suffering more damage from heated dust grains because of its greater thickness, and the authors argue that these sail materials need to be subjected to a more complete analysis of the blast wave dynamics they will be subjected to. All in all, though, velocities of 0.1 c yield little damage to a thin beryllium sail, and thin shields of similar materials can ionize dust as well as neutral interstellar gas atoms, allowing the ions to be deflected and the interstellar vehicle protected.

These are encouraging results, but the size of the problem is daunting, and I keep coming back to something Jean Schneider said in the exchange with Ian Crawford discussed here last Friday:

The original paper on this work is Early, J.T., and London, R.A., “Dust Grain Damage to Interstellar Laser-Pushed Lightsail,” Journal of Spacecraft and Rockets, July-Aug. 2000, Vol. 37, No. 4, pp. 526-531. JBIS is planning to publish selected papers from the 100 Year Starship Symposium and I assume this is one of them. When this revised paper runs, I’ll post the complete citation.

Next post: How Will Humans Fly to the Stars?