Let’s start the week with a reminder about Debra Fischer’s work on Alpha Centauri, which we talked about last week. There are several ongoing efforts to monitor Centauri A and B for planets and, given the scrutiny the duo have received for the past several years, we should be getting close to learning whether there are rocky worlds in this system or not. Fischer’s continuing work at Cerro Tololo involves 20 nights of observing time that her grant money can’t cover. Private donations are the key — please check the Planetary Society’s donation page to help if you can.

While interest in the Alpha Centauri system is high, the small red dwarf component of that system has been getting relatively little press lately. But I don’t want to neglect Proxima Centauri, which as far as we know is the closest star to the Earth (some 4.218 light years away, compared to Centauri A and B’s 4.39 light years). From a planet around Centauri B, it would be hard to know that Proxima (also known as Alpha Centauri C) was even associated with the primary stars. It’s fully 15,000 AU out (about 400 times Pluto’s distance from the Sun), and only a check on its large proper motion would reveal its true nature. The photo below makes this point as well as anything. Proxima Centauri is not a star that immediately grabs the attention. 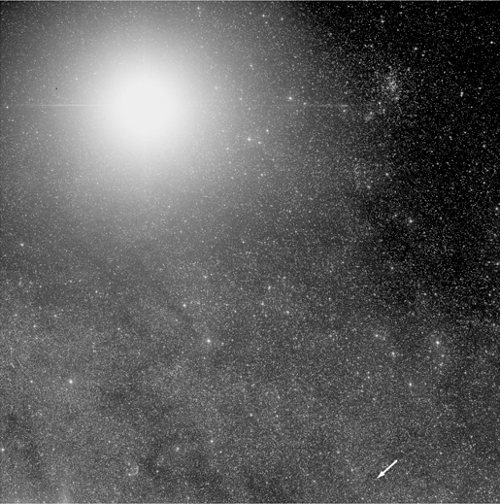 Image: Proxima Centauri (shown by the arrow) in relation to Centauri A and B. The latter appear as a single bright object at upper left. Credit: European Southern Observatory.

In his book Alpha Centauri: The Nearest Star (New York: William Morrow & Company, 1976), Isaac Asimov imagined what Proxima Centauri would look like from a planet around either of the binary stars. He worked out that Proxima’s magnitude would be a fairly dim 3.7, making it a naked eye object but not a particularly noticeable one. Its proper motion would be about 1 second of arc per year. As always, Asimov writes entertainingly:

Neither its brightness nor its proper motion would attract much attention, and stargazers might look at the sky forever and not suspect this dim star of belonging to their own system. The only giveaway would come when astronomers decided to make a routine check of the parallaxes of the various visible stars in the sky. After a month or so, they would begin to get a hint of an extraordinarily large parallax and in the end they would measure one of 20 seconds of arc, which would be so much higher than that of any other star that they would at once suspect it of being a member of their own system.

When Asimov wrote this, it was generally accepted that Proxima Centauri was gravitationally bound to Centauri A and B, but that finding has come in for serious review in the years since. In 1993, Robert Matthews and Gerard Gilmore (Cambridge University) took a hard look at the kinematic data and found that Proxima Centauri was on the borderline for an object in a bound orbit around Centauri A and B. But a later study by Jeremy Wertheimer and Gregory Laughlin (UCSC) firmed up the case using data from the European Space Agency’s Hipparcos satellite and concluded that Proxima was indeed bound to the system and not just passing in the night.

All this can have big implications. To understand why, read what Laughlin says on his systemic site about potential planets around Centauri A and B:

At first glance, one expects that the Alpha Centauri planets will be very dry. The period of the AB binary pair is only 79 years. The orbital eccentricity, e=0.52, indicates that the stars come within 11.2 AU of each other at close approach. Only refractory materials such as silicates and metals would have been able to condense in the protoplanetary disks around Alpha Centauri A and B. To reach the water, you need to go out to the circumbinary disk that would have surrounded both stars. With only A and B present, there’s no clear mechanism for delivering water to the parched systems of terrestrial planets.

But now let’s assume that Proxima Centauri is indeed bound to this system in a million-year orbit. Given our age estimates of these stars, that would mean Proxima has orbited Centauri A and B roughly 6500 times. Its presence, note Laughlin and Wertheimer, introduces a mechanism for dislodging comets from outer orbits and pushing them into the inner system(s), allowing for the water they might otherwise lack. Even in terms of astrobiology, then, Proxima Centauri may play a role in making planets around Centauri A and B interesting, not to mention what it offers up in its own right.

In thinking about planets around Proxima itself, we might start with metallicity, a major factor in planet formation. Centauri A and B have higher levels of metallicity than the Sun, but calculating red dwarf metallicities is tricky, for reasons I want to get into tomorrow, when we’ll look more closely at Proxima Centauri as a possible home for planets. We’re learning more about this intriguing star all the time, and any planets there would play into our thinking with regard to future interstellar probes, something to keep in mind as tomorrow’s discussion of Proxima proceeds.

The Matthews and Gilmore paper is “Is Proxima really in orbit about Alpha CEN A/B?,” Monthly Notices of the Royal Astronomical Society Vol. 261, No. 2 (1993), p. L5-L7 (abstract). The Wertheimer and Laughlin paper is “Are Proxima and Alpha Centauri Gravitationally Bound?” The Astronomical Journal 132:1995-1997 (2006), available online.