Although we haven’t yet found any planets around Proxima Centauri, it would be a tremendous spur to our dreams of future exploration if one turned up in the habitable zone there. That would give us three potential targets within 4.3 light years, with Centauri A and B conceivably the home to interesting worlds of their own. And the issue we started to look at yesterday — whether Proxima Centauri is actually part of the Alpha Centauri system or merely passing through the neighborhood — has a bearing on the planet question, not only in terms of how it might affect the two primary stars, but also because it would tell us something about Proxima’s composition.

Greg Laughlin makes this case in the systemic post I referred to yesterday. It was Laughlin and Jeremy Wertheimer (UCSC) who used data from ESA’s Hipparcos mission to conclude that Proxima was indeed bound to Centauri A and B. Here I want to quote the conclusion of the duo’s paper on the matter, which takes us into some interesting ground indeed:

The availability of Hipparcos data has provided us with the ability to implement a significant improvement over previous studies of the α Cen system. Our results indicate that it is quite likely that Proxima Cen is gravitationally bound to the Cen A-B pair, thus suggesting that they formed together within the same birth aggregate and that the three stars have the same ages and metallicities. As future observations bring increased accuracy to the kinematic measurements, it will likely become more obvious that Proxima Cen is bound to the Cen A-B binary and that Proxima Cen is currently near the apastron of an eccentric orbit…

First of all, the idea of Proxima Centauri as part of a triple star system makes sense given Proxima’s small relative velocity with respect to Centauri A and B (0.53 ± 0.14 km s-1). The star lies close by the binary pair at 15000 plus or minus 700 AU [and note that I incorrectly posted this distance yesterday, though the error is now corrected to reflect these figures]. Laughlin and Wertheimer calculate that the likelihood of this configuration occurring by chance is less than 10-6, adding that “ …based on this incredibly improbable arrangement it has been suspected that the stars constitute a bound triple system ever since Proxima’s discovery…”

Note too the implication that Proxima Centauri was born out of the same molecular cloud as its close neighbors, which would imply that all three have the same age and metallicity. Now that’s interesting. We know a lot about Centauri A and B, and in particular we know that both stars are more rich in metals than the Sun, with recent work by Jeff Valenti and Debra Fischer indicating a metallicity of about 150 percent of the Sun’s, and this may be a low-ball estimate, given other recent work on the matter. The link between metals — elements higher than hydrogen and helium — and planets is well established for gas giants and may well extend to small, rocky worlds, as we saw the other day in Falguni Suthar and Christopher McKay’s paper on habitable zones in elliptical galaxies. A metal-rich Proxima Centauri would boost its chances for planets. 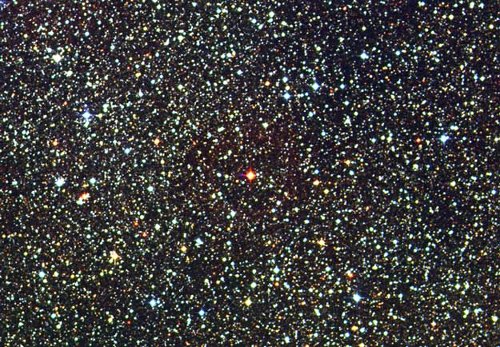 Image: Light takes only 4.22 years to reach us from Proxima Centauri. This small red star, captured in the center of the above image, is so faint that it was only discovered in 1915 and is visible only through a telescope. Recent research is revealing much about its composition and the likelihood of planets there. Credit & Copyright: David Malin, UK Schmidt Telescope, DSS, AAO.

If we thought Proxima were not bound by Centauri A and B, we’d have a problem, because as Laughlin noted on systemic, it’s tricky to figure out the metallicity of a solitary red dwarf:

Metallicities for red dwarf stars are notoriously difficult to determine. Low-mass red dwarfs are cool enough so that molecules such as titanium oxide, water, and carbon monoxide are able to form in the stellar atmospheres. The presence of molecules leads to a huge number of lines in the spectra, which destroys the ability to fix a continuum level, and makes abundance determinations very difficult.

Proxima Planets: What We Can Exclude

From the standpoint of metals, then, we’d expect the Alpha Centauri stars should have the materials needed for the formation of rocky planets, but what have we observed around Proxima Centauri? The most recent work from Michael Endl (UT-Austin) and Martin Kürster (Max-Planck-Institut für Astronomie) works with seven years of high precision radial velocity data using the UVES spectrograph at the European Southern Observatory. These observations went from March of 2000 to March of 2007 and found no planet of Neptune mass or above exists there out to about 1 AU from the star.

Let’s pause for a moment. These are radial velocity studies about a star the orientation of whose planetary system — if one exists — is unknown to us. If there are planets here, we could be looking at the system from almost any angle, so that any mass calculations have a lot of play in them. Consider a large planet at a high angle to the line of sight. A gas giant like this could cause a radial velocity signature roughly similar to a much smaller planet in a system where the orbital plane was on the line of sight. In other words, the radial velocity technique is insensitive to the reflex velocity in the plane of the sky, giving us only a lower limit to a planet’s mass.

All that is by way of saying that a planet larger than Neptune could conceivably still be there around Proxima Centauri, but the odds do not favor it. We also learn from Endl and Kürster that no super-Earths have been detected larger than about 8.5 Earth masses in orbits with a period of less than 100 days. As for the habitable zone of this star — thought to be 0.022 to 0.054 AU, which corresponds to an orbital period ranging from 3.6 to 13.8 days — we can rule out super-Earths of 2-3 Earth masses in circular orbits. Here we pause again: The authors stress that their mass limits apply only to planets in circular orbits. Planets above these mass thresholds could still exist on eccentric orbits around this star.

So no planets yet around Proxima Centauri, and we’re beginning to rule out entire categories of planet here. We also have the possibility of smaller worlds in interesting orbits. The encouraging thing is that the radial velocity work on Proxima is getting better and better, and the authors see us closing in on planets of Earth size:

With the results from this paper we demonstrate that the discovery of m sin i ≈ 1 M⊕ [one Earth mass] is within our grasp. Since sensitivity is a function of RV [radial velocity] precision, number of measurements and sampling, adding more points to the existing data string in a pseudo-random fashion, will allow us to improve the detection sensitivity over time.

On the broader question of M-dwarf planetary systems in general, Endl and Kürster note the ambiguity inherent in radial velocity studies in terms of mass. One way we can supplement our red dwarf studies is to find low-mass planets inside the habitable zone of such stars, where their close orbits make them more likely to transit the star than planets on wider orbits. Moreover, such transits will be more detectable — we say they have a greater ‘transit depth’ than for other types of star, referring to the change in brightness as the planet transits the star. As we discover transiting super-Earths in close orbits around M-dwarfs, then, we’ll be able to put them on a mass/radius diagram that will help us understand what’s happening around other such stars.

But we’re still not through with Proxima Centauri and its nearby companions. Just how old are these stars? More on that tomorrow, when I’ll consider the question in terms of what’s around us in the stellar neighborhood.

The paper is Endl and Kürster, “Toward Detection of Terrestrial Planets in the Habitable Zone of Our Closest Neighbor: Proxima Centauri,” Astronomy and Astrophysics, Volume 488, Issue 3, 2008, pp.1149-1153 (abstract).