Of all the probe targets in the outer Solar System, Titan is in many ways the most provocative. Not long ago we looked at two concepts — Titan Mare Explorer (TiME) and AVIATR — that would get instruments back into Titan’s atmosphere and, in the case of TiME, onto one of its northern seas. The allure of this moon is surely what goes on in that atmosphere, a nitrogen brew mixed with methane that generates complex hydrocarbons. We’re learning how these fall on the surface to form patterns of dunes made up of organic material, all of this mediated by a weather cycle that involves seasonal change the Cassini spacecraft has strikingly recorded.

Kathleen Mandt (Southwest Research Institute) has been studying methane in Titan’s atmosphere over time using data both from Cassini and the European Space Agency’s Huygens probe (digression: can it really be seven years since Huygens parachuted down through those orange skies? Good grief…) Mandt’s team is looking at heavy methane — methane that incorporates a carbon-13 atom in place of the more common carbon-12. Heavier methane undergoes chemical reactions at a slower rate, giving scientists a tool for measuring change in Titan’s atmosphere.

“Methane’s role on Titan is much like the role of water in the Earth’s climate. First, methane and water are the dominant greenhouse gases on Titan and Earth, respectively, increasing surface temperatures. Second, methane rain falls on the surface of Titan much like water does on Earth. Because Titan is the only other known body with a hydrologic cycle similar to our own, understanding how long methane has been present in Titan’s atmosphere is important for making sense of this unique environment that is so different, yet so much like, our own world.” 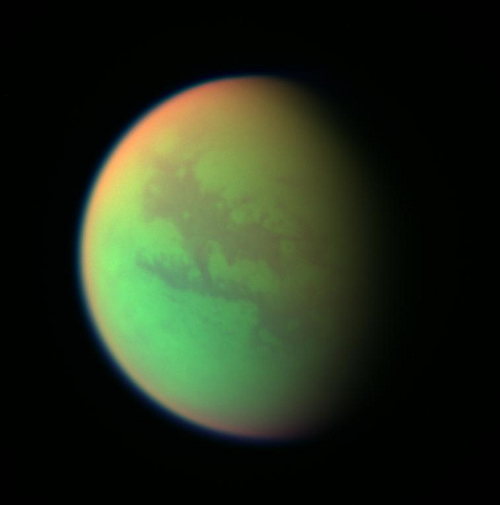 The new work uses data from Cassini’s Ion and Neutral Mass Spectrometer and weighs them against data measured on Titan’s surface by the Huygens Gas Chromatograph Mass Spectrometer. Out of that comes an intriguing read on the atmosphere’s age. Methane should have a short life because it is broken down by sunlight and converted to more complex molecules. But even if methane is being replenished from the interior to match what is happening in the atmosphere, the team finds the current nitrogen-methane atmosphere could be no more than one billion years old. Anything older would have produced a larger methane concentration in both the surface lakes and the atmosphere.

Titan’s smoggy atmosphere, a factory for hydrocarbons, must have formed long after the moon itself. Mandt’s work appears in counterpoint with a paper by Conor Nixon (University of Maryland) and team that uses Cassini data (from its composite infrared spectrometer) to estimate the amount of heavy methane in Titan’s atmosphere. While both papers appeared in the same issue of The Astrophysical Journal, they are able to constrain the age of Titan’s chemistry to different degrees, although the two are in agreement that the methane atmosphere formed long after the moon:

“Under our baseline model assumptions, the methane age is capped at 1.6 billion years, or about a third the age of Titan itself,” says Nixon. “However, if methane is also allowed to escape from the top of the atmosphere, as some previous work has suggested, the age must be much shorter — perhaps only 10 million years — to be compatible with observations.”

Nixon’s team believes that continuous replenishment of methane from an interior source would disrupt its age estimates, but Mandt’s SwRI work — incorporating Cassini’s Ion and Neutral Mass Spectrometer and the Huygens data — puts constraints on the escape of heavy methane from the atmosphere, taking such replenishment into account and still arriving at the one billion year estimate. The papers appear in the context of earlier work that found the last major methane eruption on Titan occurred between 350 million and 1.35 billion years ago, with the age of the current surface estimated at between 200 million and one billion years.

Measuring the isotopic composition of methane is telling us how long Titan’s thick atmosphere has been churning out hydrocarbons, assuming that the methane was produced by a single burst of outgassing at a time when Titan’s interior was being restructured. Our next probes to Titan will need to investigate possible methane replenishment, including methane clathrates, in which a methane molecule exists inside a lattice of ice molecules. Does Titan have an interior ocean that could release methane through the eruption of cryovolcanoes of water and ammonia? There is no shortage of questions as we investigate its atmosphere past and present.

The papers are Mandt et al., “The 12C/13C Ratio on Titan from Cassini INMS Measurements and Implications for the Evolution of Methane,” Astrophysical Journal 749 (April, 2012), p. 160 (abstract) and Nixon et al., “Isotopic Ratios in Titan’s Methane: Measurements and Modeling,” Astrophysical Journal Vol. 749 (April, 2012), p. 159 (abstract). Neither of these articles is yet available outside the journal’s firewall, so check this SwRI news release, or this one from JPL.

Next post: Another Way of Looking at Interstellar Probes