Mars has always been a tempting destination because of the possibility of life. Thus the fascination of Schiaparelli’s ‘canals,’ and Percival Lowell’s fixation on chimerical lines in the sand. But look what’s happened to the question of life elsewhere in the Solar System. We’ve gone from invaders from Mars and a possibly tropical Venus — wonderful venues for early science fiction — to a vastly expanded arena where, if we don’t expect to find creatures even vaguely like ourselves, we still might encounter bacterial life in the most extreme environments.

Astrobiology will push exploration. This is not to say that objects in deep space aren’t worth studying in their own right, possible life or not, but merely to acknowledge that if we find life on another world, it deepens our view of the cosmos and fuels the exploratory imperative. A ‘second genesis’ off the Earth, once confirmed, would heighten interest in other targets where microbial life might take hold, from the cloud tops of Venus out to the icy moons of Jupiter and Saturn. We can’t completely discount even the remote Kuiper Belt in terms of dwarf planets and their possible internal oceans.

The latest mission news from the European Space Agency makes the point as well as anything. The Jupiter Icy Moons Explorer (JUICE) mission, recently approved as part of the agency’s Cosmic Vision 2015-2025 program, takes us from French Guiana aboard an Ariane 5 to Europa, Ganymede and Callisto, all three candidates for internal oceans. It’s no surprise that the major themes of Cosmic Vision at play here are the conditions for planet formation and the emergence of life.

2022 is the scheduled launch date, with arrival in Jupiter space in 2030, after which the spacecraft will spend three years studying these interesting worlds and reporting back to Earth. The Guardian quotes Leigh Fletcher (Oxford University) in this recent article:

“Scientists have had a lot of success detecting the giant planets orbiting distant stars, but the really exciting prospect may be the existence of potentially habitable ‘waterworlds’ that could be a lot like Ganymede or Europa.

“One of the main aims of the mission is to try to understand whether a ‘waterworld’ such as Ganymede might be the sort of environment that could harbour life.”

The notion of a habitable zone — habitable for human beings — gives way to the much broader ‘life zone’ where some form of life might emerge, and Jupiter offers an extremely useful environment in which to probe it. How does Ganymede’s magnetic field, for example, protect it from the hostile radiation belts spawned by the solar wind interacting with Jupiter’s huge magnetosphere and Io’s plasma? How do Europa and Callisto compare to what we’ll find on Ganymede, and which of the three is most likely to offer conditions in which life might prosper?

The JUICE mission will make flybys of Callisto and Europa in search of answers, making the first measurements of the thickness of Europa’s crust. It will then enter into orbit around Ganymede in 2032 to study both the surface and internal structure of the moon, the only one in the Solar System known to generate its own magnetic field. You can find ESA’s matrix of science objectives here. Following its selection, the mission now enters a definition phase lasting 24 months. As you might guess, radiation is a major concern, with a late 2011 technical report noting that a shielding analysis should be carried out as soon as possible and a major effort put into shielding simulations to clarify the impact radiation protection will have on payload:

Since 2008 a development was conducted which re-analysed all available in situ measurement data from all missions that visited the Jupiter system (gravity assist and the mission that orbited Jupiter, Galileo), but using primarily Galileo data. The locations of these measurements were first mapped into the Jupiter magnetic field and then parameterised This so called JOREM model was just concluded and validated… at the beginning of the Reformulation Study and was therefore taken as the new baseline. The mean level prediction of the environment by JOREM is higher than the previously used model by about a factor of 2. Furthermore Europa flybys were added to the mission profile, increasing the total dose by about 25%. In comparison, the Callisto phase is only contributing about 9% to the total dose. 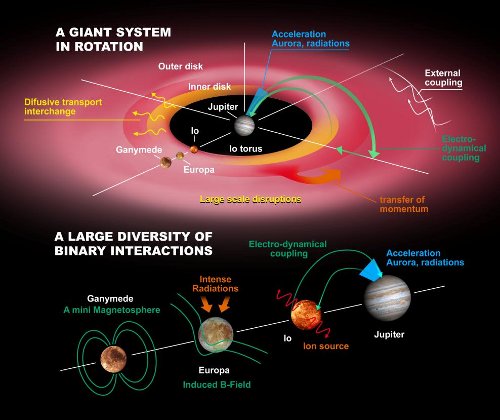 The effects of intense radiation on glasses, fibre optics and other optical and electro-optical components all come into play here, just as they do in the astrobiological questions that go beyond the issue of building the spacecraft. The interaction between the Galilean moons and Jupiter itself through gravitational and electromagnetic forces will be illuminating as we look at the question of possible life in these ‘water worlds.’ From the ‘Yellow Book’ report on JUICE, which contains the results of ESA’s assessment study of the mission:

…organic matter and other surface compounds will experience a different radiation environment at Europa than at Ganymede (due to the difference in radial distance from Jupiter) and thus may suffer different alteration processes, influencing their detection on the surface. Deep aqueous environments are protected by the icy crusts from the strong radiation that dominates the surfaces of the icy satellites. Since radiation is more intense closer to Jupiter, at Europa’s surface, radiation is a handicap for habitability, and it produces alteration of the materials once they are exposed…

That difference will be useful as we compare and contrast the three moons for potential astrobiology. And the differences affect the instruments needed to do the job:

The effect of radiation on the stability of surface organics and minerals at Europa is poorly understood. Therefore, JUICE instrumentation will target the environmental properties of the younger terrains in the active regions where materials could have preserved their original characteristics. Measurements from terrains on both Europa and Ganymede will allow a comparison of different radiation doses and terrain ages from similar materials. The positive side of radiation is the generation of oxidants that may raise the potential for habitability and astrobiology. Surface oxidants could be diffused into the interior, and provide another type of chemical energy…

I’ve focused on radiation here as simply one of the major issues that makes Jupiter such an interesting target when we’re looking at astrobiological possibilities. The Yellow Book report says the Galilean satellites “…provide a conceptual basis within which new theories for understanding habitability can be constructed.” Voyager and Galileo have given us enough of a look at these worlds to know how much we will benefit from an orbiter around Ganymede, even if a far more radiation-hardened Europa orbiter isn’t yet in the cards. But we do get the Callisto and Europa flybys with JUICE, and the path ahead is clearly defined as we try to set needed constraints on the emergence of life on icy satellites in our own Solar System and around other stars.