Our expectations determine so much of what we see, which is one of the great lessons of Michael Michaud’s sweeping study of our attitudes toward extraterrestrial intelligence in Contact with Alien Civilizations (Springer, 2006). But extraterrestrials aside, I’ve also been musing over how our attitudes affect our perceptions in relation to something closer to home, the human space program. Recently I was reminded of Richard Gott’s views on the space program and the Copernican Principle, which suggest that just as our location in the universe is not likely to be special, neither is our location in time.

My expectation, for example, is that whether it takes one or many centuries, we will eventually have expanded far enough into the Solar System to make the technological transition to interstellar missions. But Gott (Princeton University) has been arguing since 2007 that there is simply no assurance of continued growth. In fact, his work indicates we are as likely to be experiencing the latter stages of the space program as its beginnings. The view is controversial and I like to return to it now and again because it so shrewdly questions all our assumptions. 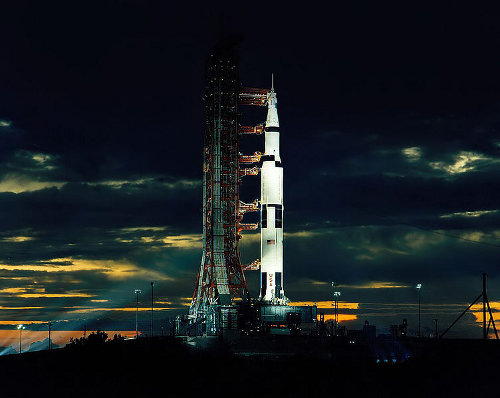 Image: Apollo 17 Saturn V rocket on Pad 39-A at dusk. Will manned space exploration ever achieve the levels of funding that made Apollo possible again? Credit: NASA.

So ponder a different, much more Earth-bound future, one in which funding for human spaceflight may end permanently. Examples abound, from the pyramid-building phase of Egypt’s civilization to the return of Cheng Ho’s fleet to China — not every wave of technology is followed up. Thus Gott, in a short but intriguing discussion called A Goal for the Human Spaceflight Program:

Once lost, opportunities may not come again. The human spaceflight program is only 48 years old. The Copernican Principle tells us that our location is not likely to be special. If our location within the history of human space travel is not special, there is a 50% chance that we are in the last half now and that its future duration is less than 48 years (cf. Gott, 2007). If the human spaceflight program has a much longer future duration than this, then we would be lucky to be living in the first tiny bit of it. Bayesian statistics warn us against accepting hypotheses that imply our observations are lucky. It would be prudent to take the above Copernican estimate seriously since it assumes that we are not particularly lucky or unlucky in our location in time, and a wise policy should aim to protect us even against some bad luck. With such a short past track record of funding, it would be a mistake to count on much longer and better funding in the future.

This application of the Copernican Principle goes against my deepest presumptions, which is why I appreciate the intellectual gauntlet it hurls down. Because what Gott is sketching is a by no means impossible future, one in which the real question becomes how we can best use the technologies we have today and will have in the very near future to ensure species survival. Gott’s answer is that within the first half of this century or so, we will have the capability of planting a self-sustaining colony on Mars, making us a two-planet species and thus better protected against global disaster of whatever sort. We will have created an insurance policy for all humanity.

Let’s act, in other words, as if we don’t have the luxury of an unbroken line of gradual development, because an end to the space program some time in the 21st Century might mark the end of any chance we have to get into the Solar System, much less to the stars. Skip the return to the Moon, a hostile environment not conducive to colonization, and go for the one best chance for extending the species, a planet with water, reasonable gravity and the resources needed to get an underground base off to a survivable start. The real space race? The race to get a colony planted in the most likely spot before all funding for human spaceflight ends.

Gott is reminded of the library of Alexandria, a laudable effort to collect human knowledge but one that eventually burned, taking most (but thankfully not all) of Sophocles’ plays with it. Here he’s thinking of the surviving seven Sophoclean plays and weighing them against the 120 that the dramatist wrote, by way of making the case for off-world colonies as soon as possible:

We should be planting colonies off the Earth now as a life insurance policy against whatever unexpected catastrophes may await us on the Earth. Of course, we should still be doing everything possible to protect our environment and safeguard our prospects on the Earth. But chaos theory tells us that we may well be unable to predict the specific cause of our demise as a species. By definition, whatever causes us to go extinct will be something the likes of which we have not experienced so far. We simply may not be smart enough to know how best to spend our money on Earth to insure the greatest chance of survival here. Spending money planting colonies in space simply gives us more chances–like storing some of Sophocles’ plays away from the Alexandrian library.

As I said, this is bracing stuff (and thanks to Larry Klaes for the pointer). Gott is not the only one wondering whether there is a brief window that will allow us to move into the Solar System and then close, but he is becoming one of the more visible proponents of this view. The motto of the Tau Zero Foundation — ad astra incrementis — assumes a step-by-step process over what may be centuries to develop the technologies for travel to other stars. But Gott’s point is emphatic and much more urgent: For incremental development in space to occur, we should multiply the civilizations that can achieve it, spinning off colonies that back up what we have learned against future catastrophe.

That’s a job not for the distant future but for the next 4-5 decades. Gott reckons that if we put up into low Earth orbit as much tonnage in the next 48 years as we have in the last 48 years (in Saturn V and Shuttle launches alone) we could deliver 2,304 tons to the surface of Mars. And while he talks about heavy lift vehicles like the Ares V, we also have commercial companies like SpaceX with its Falcon Heavy concept and the continuing efforts of Robert Zubrin’s Mars Society to make something like this happen even absent massive government intervention.

Will the first interstellar mission be assembled not by an Earth team but by the scientists and engineers of a colony world we have yet to populate? There is no way to tell, but a Mars colony of the kind Gott advocates would give us at least one alternative to a future Earth with no viable space program and no prospects for energizing the species through an expansive wave of exploration. One colony can plant another, multiplying the hope not only of survival but renaissance. But all of it depends upon getting through a narrow temporal window that even now may be closing.