KOI-872: Timing is Everything

It’s no surprise that the techniques we’re using to look for moons around exoplanets should start turning up new planets on their own. We’re still looking for that first exomoon, but a team of researchers working with the Hunt for Exomoons with Kepler (HEK) project has found transit variations that have revealed a second planet around a star already known to have one transiting planet. The star is the intriguing KOI-872 (KOI stands for Kepler Object of Interest), the data on which were recently released by the Kepler team and analyzed swiftly by HEK.

Kepler’s transit methods examine the change in starlight when an exoplanet passes in front of the star being observed. This lightcurve, however, can tell more than a single tale. David Kipping (Harvard-Smithsonian Center for Astrophysics) is head of HEK and second author of the paper on the new work, which was published online today in the journal Science:

“For a planet following a strictly Keplerian orbit around its host star, the spacing, timing and other properties of the observed transit light curve should be unchanging in time. Several effects, however, can produce deviations from the Keplerian case so that the spacing of the transits is not strictly periodic.” 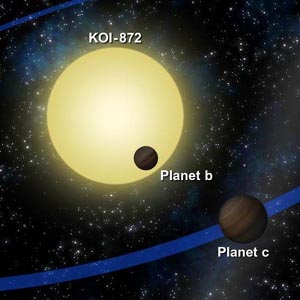 Those effects are clear cut, changes in how long the transit takes (Transit Duration Variation, or TDV), and changes to when it actually occurs (Transit Timing Variation, or TTV). These deviations are sensitive to objects as small as 0.2 Earth masses, which shows their utility in hunting for large exomoons. In the case of the Sun-like star KOI-872, transits of the known planet show time variations of two hours. The TTVs are large and precise enough to allow scientists to calculate the orbit of the second planet. According to Kipping, both the transiting planet and the unseen planet perturbing its orbit are Saturn-class worlds. Moreover, they orbit close to a 5:3 mean motion resonance, accounting for the size of the timing variations.

Image: Using Kepler Telescope transit data of planet “b”, scientists predicted that a second planet “c” about the mass of Saturn orbits the distant star KOI-872. This research, led by Southwest Research Institute and the Harvard-Smithsonian Center for Astrophysics, is providing evidence of an orderly arrangement of planets orbiting KOI-872, not unlike our own solar system. Credit: Southwest Research Institute.

You may recall from last fall the story of Kepler-19b (discussed here in On Planets and What We Can See), a probable mini-Neptune some 650 light years away in the constellation of Lyra. Researchers at the Harvard-Smithsonian Center for Astrophysics were able to uncover a second world in the same system, Kepler-19c, by studying the transit timing variations of Kepler-19b. In this case, the timing variations were about five minutes long, but other than revealing the planet’s existence, they allowed no further deductions about its size or composition. In fact, the prospects — all consistent with the limited data available — ranged from a rocky planet on a circular five-day orbit to a gas giant on an oblong 100-day orbit.

But the new planet around KOI-872 is another matter entirely, and in Kipping’s words represents the transit timing variation model coming into full maturity, allowing us to measure the mass of the unseen planet and to determine the 5:3 orbital resonance. Moreover, we get tight constraints on the inclination, semi-major axis and eccentricity of both planets, which indicate they follow circular, co-planar orbits much like planets in our own Solar System. We now know that the unseen planet orbits its star every 57 days. Further Kepler observations will allow us to refine these details and tune up TTV and TDV methods for future planet and exomoon discoveries. 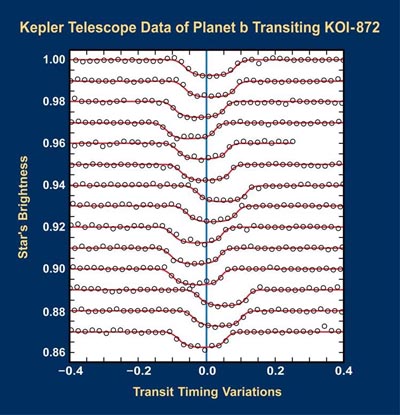 Image: Scientists analyzed Kepler Telescope data and identified KOI-872 as a stellar system where measured transits of a planet orbiting the star show large time variations (the shifting bumps in the data) indicative of a hidden companion. A team led by Southwest Research Institute and the Harvard-Smithsonian Center for Astrophysics determined that the observed variations can be best explained by an unseen planet about the mass of Saturn orbiting the host star every 57 days. Credit: Southwest Research Institute.

When the HEK team went to work on KOI-872, it was motivated in part by the fact that the transiting planet was large enough to hold on to a large moon of the size that current TTV techniques could uncover. The large TTVs yielded a planet rather than a moon in this case, but future finds of large moons around gas giants in the habitable zone will give us some idea as to whether single, rocky planets are the only likely venue for life. Are there as many habitable moons in the galaxy as habitable planets, or even more? HEK is the first step toward helping us find out.

The paper is Nesvorný, Kipping et al., “The Detection and Characterization of a Nontransiting Planet by Transit Timing Variations,” published online in Science May 10 2012 (abstract).