What would you do if you had a spacecraft pushing toward the edge of the Solar System with nothing much to do? The answer is to assign it an extended mission, as we found out with the two Voyagers and their continuing data return that is helping us understand the boundaries of the heliosphere. In the case of New Horizons, NASA’s probe to Pluto/Charon, two extended missions may be involved after Pluto, the first being a flyby of one or more Kuiper Belt targets, the second being a further look at what is actually going on where the solar wind meets the interstellar medium.

Alan Stern, principal investigator for New Horizons, comments on the possibility in his latest report on the mission, noting that a second extended mission isn’t out of the question, and adding that New Horizons won’t make it as far as the Voyagers before it runs out of power. But 90 to 100 AU seems a possibility, which would provide a useful supplement to Voyager data. Remember that New Horizons carries two instruments ideal for this part of the system. The first is the Solar Wind Around Pluto (SWAP) plasma instrument, the second the Pluto Energetic Particle Spectrometer Science Investigation (PEPSSI). All this is in addition to what the spacecraft’s dust counter, its two imagers and its ultraviolet spectrometer may tell us.

Stern’s report on New Horizons comes at the same time we have word, from a new paper in Science, that the assumed ‘bow shock’ at the outer edge of the heliosphere may not actually exist. The bow shock is at the boundary between the solar wind pushing out from the Sun and the interstellar medium, an area of presumed turbulence that has been observed around other stars. The new paper from David McComas (SwRI) and colleagues presents findings from the Interstellar Boundary Explorer (IBEX) that show the Sun is moving more slowly in relation to the interstellar medium than previously thought, slow enough to prevent a bow shock from forming. 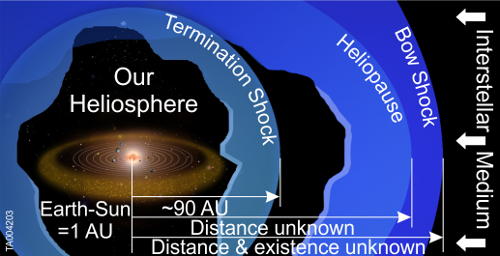 Image: IBEX has caught the interstellar wind that surrounds and compresses our heliosphere and has found that it travels more slowly and in a different direction than previously thought. This new understanding has important implications for the size and shape of the heliosphere and may inform the history and future of the solar system. Credit: SwRI.

Maybe New Horizons can help us clarify the situation with studies of the outer heliosphere, but we still lack a mission that could get us out as far as the bow shock region itself (the Voyagers have entered the heliosheath, but their signals will surely be lost before getting to the needed 200 AU or more from the Sun). All of this ties in with recent Cassini results suggesting that the heliosphere is more spherical than comet-shaped, so perhaps the interactions at system’s edge aren’t quite as fierce as has been thought. We need Innovative Interstellar Explorer to learn more, or a comparable mission specifically designed to penetrate into true interstellar space.

New Horizons in the Kuiper Belt

Meanwhile, our Pluto/Charon mission is, says Stern, doing just fine, having exited a period of hibernation on April 30 to begin a series of extensive systems checkouts. The spacecraft’s Pluto encounter occurs in the summer of 2015, but it should take a year to get all the encounter data back to Earth due to the slow data transmission rates at that distance. It’s after that that the first extended mission, subject to approval by NASA, would study objects in the Kuiper Belt. The spacecraft should have about 40 percent of its fuel still available, so a choice of KBOs should be possible, assuming the ongoing hunt for likely candidates turns up workable targets.

The New Horizons team has been using Earth-based telescopes to hunt for KBOs, but so far none has been identified that would be within range of New Horizons. It’s a tricky search, and one Stern assumes will succeed, but his recent report explains some of the problems:

First, the only KBOs within our reach are likely to be small, roughly 50 kilometers in diameter. Because they are small and far away, they will be faint as seen from Earth. In fact, calculations show that the KBOs we need to find are going to be about 25,000 times fainter than Pluto, which is itself about 10,000 times fainter than the eye can see. This means we have to search for objects with the largest telescopes and most sensitive astronomical cameras on Earth.

The second factor making the search tough is that our trajectory is pointed at the heart of the Milky Way’s densest star fields — those of the galactic center in the constellation Sagittarius. So our search is kind of a “needle in a haystack” hunt for very faint objects slowly moving against regions of the sky thick with stars!

All I could think of when I read that was an image of Clyde Tombaugh working the blink comparator at Lowell Observatory in 1930. I wonder what he would have thought then of the chances for tracking a target 25,000 times fainter than the dim planet (well, dwarf planet) he eventually found. The New Horizons effort should have at least one target defined by 2015, at which time an engine burn in the fall of that year would change the spacecraft’s trajectory to reach the first KBO, a journey that — if the team’s calculations are accurate — should last three or four years and perhaps longer. That could place the first KBO flyby as early as 2018 or as late as 2021.

What’s exciting about Stern’s report this time around is his statement that any target KBO will be approached at distances perhaps as close as the Pluto/Charon flyby, which means we should get images from the KBOs that are as detailed as those from Pluto. The down side: With no other Kuiper Belt mission in the works, we’ll need every bit of New Horizons’ observations on KBO surface composition and features, temperatures, moon or rings system and anything else the brief encounter can deliver, for as Stern puts it, “New Horizons is very likely to be the only spacecraft that will explore KBOs in the lifetime of most people alive today.”

Or maybe not. Let’s assume that first extended mission into the Kuiper Belt will be approved, which will yield not only close-up KBO images but also more distant observations of KBO satellites as well as dust particle distribution data. And while we get behind missions like Innovative Interstellar Explorer and push to see them implemented, let’s also cross our fingers for that second extended mission that would keep New Horizons active until it goes silent somewhere out around 100 AU. As the latest IBEX findings remind us, we know all too little about the boundary between our Solar System and the interstellar gulf beyond.

The new IBEX findings are in McComas et al., “The Heliosphere’s Interstellar Interaction: No Bow Shock,” published online in Science 10 May 2012 (abstract).