It’s too bad we don’t already have a workable Enterprise, that vast near-term rendition of the Star Trek vehicle that a systems engineer named ‘Dan’ has been talking about on BuildTheEnterprise.org (a site which has been so heavily trafficked in the last 48 hours that it has proven almost inaccessible). What Dan has in mind is the design, down to the smallest level of detail, of a ship powered by three ion propulsion engines that tap on-board nuclear reactors to remain operational. It may not be an antimatter-powered Enterprise, but it’s a faithful simulacrum, reflecting its creator’s long-lasting interest in the ship that William Shatner once commanded.

Dan thinks the new Enterprise could get us to Mars in 90 days, but getting nuclear reactors into low Earth orbit in the first place will be a challenge not only technically but politically, and shielding the crew will also involve a serious amount of mass that has to get lifted. One of the fascinations of this highly detailed site is that many of these objections are anticipated:

NASA is developing a heavy lifter, the Space Launch System (SLS), that will be able to carry a payload of 280,000 pounds, about the same as a Saturn 5 rocket. Unfortunately this is about a factor of four too low for what the Enterprise will optimally need. Because the Enterprise’s wet mass will be around 187 million pounds, a suitable heavy lifter should carry a payload of at least 1 million pounds to keep down the total number of launches needed. This is a payload similar to the Nova rocket designs from the 1960s that were never taken to production. So, in general, if the Enterprise program is someday funded, NASA will have to start a new heavy lifter rocket program that can carry much bigger payloads than their current plans.

And what about radiators to remove excess heat? Dan’s design better factor those in. An informal peer review of the concept is already beginning, as witness Adam Crowl’s take on the radiator problem on Crowlspace and back-channel discussions among aerospace engineers and designers in various places. If you want to track the new Enterprise beyond its own site, Dan’s Twitter handle is @BTE-Dan, and I’ll plan to have a report on some of the informal peer review in these pages before long.

Dan is a man with a long-term plan — he’s proposing not only building a huge ship but making it the first of a series, with three new ships per century, each keying on advances made during the intervals between construction. Early missions could involve the Moon, Mars, Venus and perhaps the moons of Jupiter, for while we’re a long way from Star Trek’s warp drive, Dan claims the new Enterprise’s ion propulsion would allow a constant .002g acceleration for planetary exploration. A rotating wheel within the ship’s saucer section would provide an artificial 1g of gravity. The latter is one case of reworking the original Enterprise design to fit the requirements of a technology far less sophisticated than what was proposed in the TV series. 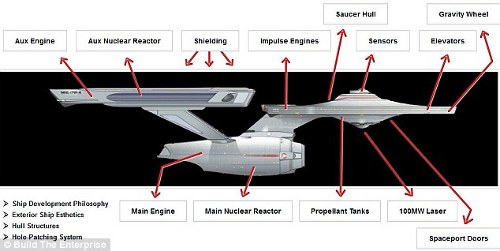 The Daily Mail looks at the new Enterprise in a May 15 story, quoting its creator on his changes to the ship, one of which was made to keep the ship’s officers in workable conditions:

“While things get moved around quite a bit inside the Gen1 Enterprise when compared to the ships from Star Trek, they are not moved around upon a whim. They are moved around because the Gen1 ship’s technological capabilities demand certain changes.”

The gung-ho spirit of Dan’s vision is engaging, especially his belief that all this can be achieved in 20 years, and the man who describes himself as a systems and electrical engineer in his day job tells the Daily Mail his BuildTheEnterprise site grew naturally out of the same kind of thinking he brings to bear at his high-tech firm, built on exploring new ideas and pushing technologies. I’m glad to see that he’s also hoping that young people find inspiration in his site, for it’s this kind of brainstorming, so often found in science fiction, that can motivate young minds into engineering or scientific careers. “…this may still be a long way from warp drives powered by anti-matter,” he tells the Daily Mail, “but it will be a respectable start.”

I love thinking big, but if we did have the technological means to build the first generation Enterprise in the short term, what about the needed economic and political environment? Is Congress likely to fund NASA to embark on a project of this magnitude — while continuing its funding for robotic missions to planets and elsewhere — given the size of the budget deficit and an environment of overwhelming debt? Surely that idea is more fantastic than the actual construction of a ship that can accommodate 1000 people within the next 20 years.

No, let’s take a longer perspective, with all due respect for energetic thinkers like Dan who want it done tomorrow. Ideas grow in their own time, and something along the lines of the new Enterprise design in terms of propulsion — i.e., large scale ion propulsion fed by nuclear reactors — may emerge as a working concept for our future Solar System-wide infrastructure, one that not a few scientists and engineers are now examining to weigh its merits and ponder its implications. In any case, Dan has a backup plan of his own in case his schedule is too optimistic. Once his site stabilizes under the current traffic load, have a look at it to see his proposed way forward.