Disruptive Planets and their Consequences

One of the joys of writing a site like Centauri Dreams is that I can choose my own topics and devote as much or as little time as I want to each. The downside is that when I’m covering something in greater depth, as with the four articles on antimatter that ran in the last six days, I invariably fall behind on other interesting work. That means a couple of days of catch-up, which is what we’ll now see, starting with some thoughts on a possible planet beyond Neptune, a full-sized world as opposed to an ice dwarf like Pluto or Eris. This story is actually making the rounds right now, but it triggered thoughts on older exoplanet work I’ll describe in a minute.

It’s inevitable that we call such a world Planet X, in my case because of my love for the wonderful Edgar Ulmer film The Man from Planet X (1951), in which a planet from the deeps wanders into the Solar System and all manner of trouble — including the landing of an extraterrestrial on a foggy Scottish moor — breaks out. Of course, Planet X was also the name for the world Percival Lowell was searching for in the 1920s, a hunt that resulted in Clyde Tombaugh’s discovery of Pluto, although the latter occurred more or less by chance since Pluto/Charon isn’t big enough to cause the gravitational effects Lowell was examining.

So is there a real Planet X? Rodney Gomes (National Observatory of Brazil) has run simulations on the ‘scattered disk’ beyond Neptune and, factoring in oddities like the highly elliptical orbit of Sedna and other data points on these distant objects, Gomes believes a Neptune-class planet about four times as massive as Earth may be lurking in the outer system. Sedna, you may recall, has a perihelion of 76 AU but an aphelion fully 975 AU out — it’s on a 12,000 year orbital period! As for Gomes, his team has been looking at what they call ‘true inner Oort cloud objects’ for some time, seeing objects like Sedna as markers for the existence of a planet.

Gomes ran through the results of his simulations at an American Astronomical Society meeting in Oregon in May, keeping the Planet X hunt alive, and it’s worth noting that a Jupiter-class planet at about 5000 AU may also fit the bill (see Finding the Real Planet X). For that matter, the orbits of scattered disk objects may have another explanation besides an undiscovered planet. But thinking about Gomes’ work brought me around to Jason Steffen and team, whose new paper goes to work on a much different kind of gravitational effect, the disruption caused by a ‘hot Jupiter’ as it moves through a young Solar System and scatters smaller planets.

Realm of the Wandering Planets 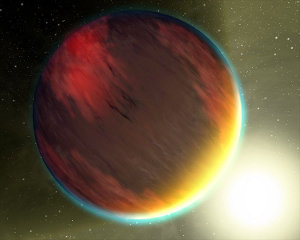 Steffen (Fermilab Center for Particle Astrophysics) is digging into exactly what makes ‘hot Jupiters’ take up such extreme orbits. These are planets of Jupiter’s size and larger that whip around their stars in periods of just a few days. The question is how they got to their present position, for the assumption is that planets of this size had to form much further out in their system and then move inward. There are two mechanisms that could make this happen, one of which — a slow migration through a gas disk that would allow low-mass planets to likewise migrate inward, where they can be captured into mean-motion resonance with the gas giant — seems benign. These models suggest the presence of smaller worlds near the hot Jupiter.

Image: Artist’s concept of a hot Jupiter, likely a disrupter of any planets that encounter it. Credit: NASA.

The other model is lethal to the inner system. Here, the giant planet’s migration is caused by gravitational interactions with another gas giant that result in one of the worlds being flung into interstellar space, while the other migrates inward and disrupts the orbits of any inner-system worlds. This scenario is what the Steffen paper is suggesting, for the team’s analysis of 63 Kepler planets around solar-type stars in orbits of 6.3 days or less shows no evidence at all for nearby planets. If such worlds were there, they ought to be detectable through transit timing variations (TTV) unless they are smaller than the Earth, or much further out in the system.

To compare and contrast environments, the researchers took another sample of 31 Kepler planets with ‘warm Jupiters’ — planets of Jupiter size around the same kind of star, but with longer orbital periods of between 6.3 and 15.8 days. They also checked 222 Kepler ‘hot Neptunes.’ The result: Three of the 31 ‘warm Jupiter’ systems showed companion planets in the inner system, and fully one-third of the hot Neptune systems showed the presence of inner system planets. Finally, the team looked at 52 ‘hot Earths’ in the Kepler data for TTVs, testing whether hot Jupiters and smaller worlds like these might co-exist in mutually inclined orbits. They found no evidence for high-mass companions on inclined orbits in this scenario.

The authors see this as a boost to the ‘scattering’ model, the study suggesting that hot Jupiters are migrating worlds on initially highly elliptical orbits that scattered other planets out of the inner system before their orbits became circularized close to their stars. Short period, low-mass planets would seem to have a different formation history than hot Jupiters. From the paper:

Hot Jupiter systems where planet-planet scattering is important are unlikely to form or maintain terrestrial planets interior to or within the habitable zone of their parent star. Thus, theories that predict the formation or existence of such planets (Raymond et al. 2006; Mandell et al. 2007) can only apply to a small fraction of systems. Future population studies of planet candidates, such as this, that are enabled by the Kepler mission will yield valuable refinements to planet formation theories — giving important insights into the range of probable contemporary planetary system architectures and the possible existence of habitable planets within them.

If hot Jupiter systems have a different dynamical history than other planetary systems, as this work suggests, then we have a useful filter to apply to exoplanet studies. If it can be firmly established that the presence of a hot Jupiter means no planets in the habitable zone, we know our resources are best focused elsewhere when it comes to looking for terrestrial worlds. It’s too early to make that call now, but the evidence is mounting that in most cases hot Jupiters are killer worlds when it comes to young planets in the warm regions where life may occur.