All Quiet Around Gliese 581

When you’re looking for signs of an extraterrestrial civilization, you can take two basic approaches. Think back to Frank Drake’s initial SETI experiment at Green Bank in 1960, when because of limited resources and time he chose specific targets: Epsilon Eridani and Tau Ceti. The choice made sense at the time because both were nearby stars and SETI, fresh off the classic paper “Searching for Interstellar Communications” by Philip Morrison and Giuseppe Cocconi, was just beginning to define a methodology. Drake studied his targets near the 1.420 GHz frequency — the 21 centimeter hydrogen line — that the authors had suggested.

Of course, sky surveys are also possible, of which SETI@home may be the most widely known. Here the idea is to make no assumptions whatever about the location of a SETI signal and observe the entire sky. SERENDIP (Search for Extraterrestrial Radio Emissions from Nearby Developed Intelligent Populations) is an attempt, for example, to analyze radio telescope data obtained while astronomers are using the telescope for other purposes. The SERENDIP V.v spectrometer installed at Arecibo in 2009 is the most recently deployed instrument involved in this strategy.

We’ve been considering the possibilities growing out of the Square Kilometer Array for SETI purposes, prompting a number of readers, Adam Crowl being the first, to send along a new paper on using Very Long Baseline Interferometry in a targeted SETI search. Hayden Rampadarath and colleagues at the International Centre for Radio Astronomy Research (Perth, Australia) intend the paper to be a foundational document for the use of VLBI in future SETI projects including those at the SKA. The results show great promise for the technique.

With VLBI, combining signals from multiple telescopes allows us to emulate a single instrument the size of the maximum separation between the telescopes, which could be hundreds to thousands of kilometers. Interestingly, there has been little application of VLBI techniques in SETI, although the SETI-Italia project using the VLBI Medicina telescope is active and the SETI Institute has been studying interferometric techniques at frequencies between 1200 and 1750 MHz. What Rampadarath and colleagues have done is to target the widely studied red dwarf Gliese 581, using observations at 1230-1544 MHz made with the Australian Long Baseline Array, which includes three radio telescopes spaced widely in New South Wales. 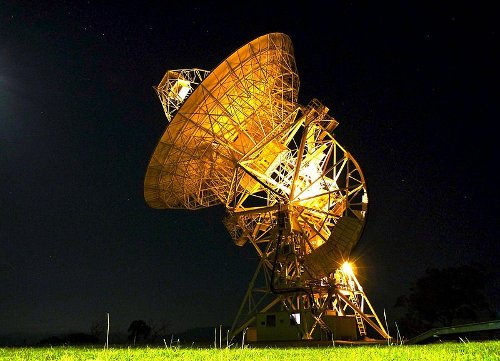 It’s a good choice of target because Gliese 581 is a multi-planet system with at least one planet that looks to be on the edge of the habitable zone. With Kepler’s investigations of thousands of planetary candidates ongoing, we’re beginning to pick out high-value targets like this, defined as planets where liquid water could exist on the surface and life might arise. Gl 581 is not one of the Kepler worlds, but it does present us in the form of Gl581d with a super-Earth with an orbital period of 83 days that according to at least one recent study may offer habitable conditions. The existence of another possible habitable zone planet, Gl581g, now appears unlikely.

VLBI and Its Benefits

The Perth team observed Gl581 for eight hours using the stations of the Long Baseline Array. The result: 200 narrow-band and 22 broadband candidate signals were examined, most or all of which are thought to have been caused by Australian space to Earth geostationary satellites. No evidence for signals from the region of Gl581 emerges. The result is hardly a surprise, but the good news is that this pilot study demonstrates that Very Long Baseline Interferometry makes what the authors call ‘an ideal technique for targeted SETI.’ It also shows us how to proceed:

Since this was a proof-of-concept observation, two differences between this experiment and a typical VLBI observation should be noted. Firstly the baseline lengths in this experiment were short by VLBI standards. Baselines one or even two orders of magnitude longer would signiﬁcantly reduce the amount of correlated RFI [radio frequency interference].

That’s helpful indeed. Affecting this study were the Australian Optus’ Mobilesat and the INMARSAT geostationary satellite systems, which operate in a range between 1525-1559 MHz, a close match with the candidate signals detected in the observation run. Longer baselines should reduce such problems because they widen the distance between the source of interference and different parts of the array. But there’s more:

Secondly, most VLBI observations are carried out using more than three telescopes. Increasing the number of baselines to four or more constrains both the phase and amplitude closure relations, drastically increasing the quality of calibration. This would also provide the opportunity for image plane searching. However, it would likely be computationally expensive as a technique for searching over very wide frequency ranges. Relaxing the single baseline ﬁve times median limit could enhance the sensitivity beyond that of the weakest baseline.

VLBI allows us to search for SETI signals over a wide range of frequencies and with high sensitivity. But there’s also this: The VLBI technology is moving from older data recording systems to real-time network connections, which means these techniques will become available for quick follow-ups on transient radio sources. Thus the detection of a possible SETI signal with VLBI techniques becomes possible. Gliese 581 thus stands in relation to VLBI techniques the same way Epsilon Eridani and Tau Ceti stood to early radio SETI, an initial target that began a series of systematic experiments that the Square Kilometer Array will continue.

What we can conclusively say about Gl581 at this point is that, during the time of observation, no powerful radio signals were beamed at us. I like what co-author Steven Tingay (Curtin University) told ABC Science in a recent story: “We would have seen a signal brighter than 7 megawatts per hertz, but that is a pretty strong signal. Who knows, maybe it was a public holiday on that planet or something and we missed out.” Hope reigns eternal…