While we wait for the last transit of Venus of the century, it’s worth remembering how tricky transit studies can be when we push them out to exoplanetary distances. You would think that catching a transit of a planet like Venus, closer to us than the Sun, would be simplicity itself, but the orbital planes of Venus and the Earth are not precisely enough aligned to allow for more than a pair of transits followed by over a century of waiting for the next. I’ve just received a copy of Mark Anderson’s The Day the World Discovered the Sun (Da Capo Press, 2012) and will be writing about 18th Century transit studies and their impact in coming weeks.

The transits Anderson writes about and the expeditions that ranged the globe to study them played a role in helping astronomers understand the dimensions of the Solar System. And you can see that if Venus is a challenge, tracking planets around other stars will push our technology to its limit. Nonetheless, we’re getting quite good at teasing information out of our data, as the planet known as HD 189733b continues to show us. It was just 16 months ago that carbon dioxide and methane were discovered in the planet’s atmosphere. Moreover, the work was done using a 3-meter instrument located at NASA’s Infrared Telescope Facility at Mauna Kea that ranks no higher than 40th among our ground-based instruments.

Sodium had already been found in the atmosphere of HD 189733b, and now comes word that astronomers working at the Hobby-Eberly Telescope at UT Austin’s McDonald Observatory have identified interactions with the parent star that show the planet is slowly dissolving. 63 light years away in the constellation Vulpecula, the planet is losing hydrogen in great streamers that are much hotter than previously thought, an indication that flare activity on the star is interacting with the atmosphere of the planet. Given the proximity of planet to star, that’s not entirely surprising: HD 189733b, a ‘hot Jupiter,’ orbits 10 times closer to its star than Mercury to our Sun.

Probing an exoplanet’s atmosphere is made possible by its transits as seen from Earth, as Seth Redfield (Wesleyan University) explains: 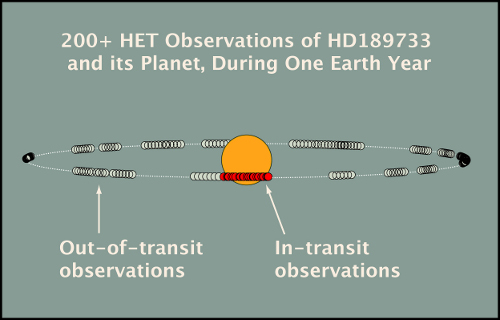 Image: The dotted line shows the planet’s orbit around the star HD189733. The planet orbits the star once every 2.2 Earth days, crossing the face of the star well below its equator. The small circles indicate the planet’s location during each of Seth Redfield’s more than 200 Hobby-Eberle Telescope observations over the course of one Earth year. The red circles indicate observations during transit; the rest of the circles denote out-of-transit observations. Credit: S. Redfield/T. Jones/McDonald Obs.

It was Redfield who first identified sodium in HD189733b’s atmosphere using the same instrument, based on observations that compared the spectrum of the light collected during a transit with the light of the star by itself. As huge as this planet is — 20 percent more massive than Jupiter — it blocks only 2.5 percent of the star’s light, along with another 0.3 percent that is accounted for by the planet’s atmosphere. Exoplanetary atmosphere studies using transits are built around the slight differences that are revealed when the planet passes in front of the star. It’s worth reflecting on all this as we wait for tomorrow’s transit of Venus and ponder how far transit studies have taken us since the first scientific expeditions set out to study them.

The paper is Jensen et al., “A Detection of Hα in an Exoplanetary Exosphere,” Astrophysical Journal Vol. 751, No. 2 (2012), p. 86 (abstract / preprint). More in this McDonald Observatory news release.