Science, Fiction and the Sail

Thinking about the poem “To Sail Beyond the Sun: A Luminous Collage,” which I published excerpts from yesterday, I was reminded that if Ray Bradbury didn’t spend a lot of time on solar sails, many of his compatriots did. Indeed, the early story of the solar sail is inseparable from science fiction. Astounding Science Fiction’s John Campbell published the first serious look at solar sails for propulsion all the way back in May of 1951. The article’s title, “Clipper Ships of Space,” would be echoed by a highly influential paper by Gregory Matloff and Eugene Mallove called “Solar Sail Starships: The Clipper Ships of the Galaxy,” which ran in the Journal of the British Interplanetary Society in 1981.

The thirty years that passed between publication of the two articles saw the solar sail come into its own as a serious mission concept. Carl Wiley, who wrote the essay in Astounding, knew that many scientists and engineers were science fiction readers, but he was concerned enough about his reputation to submit his thoughts under the byline ‘Russell Saunders.’ The idea had much deeper roots, to be sure. Both Konstantin Tsiolkovsky and Friderikh Arturovich Tsander had considered the benefits of thin reflectors in space and J.D. Bernal discussed space sails in The World, the Flesh & the Devil (1929). The notion of sailing even shows up in the writings of Johannes Kepler.

But Wiley got the idea out to an audience comprised of people with the skills to move it forward. In 1958, Richard Garwin produced the first treatment of solar sails in a technical journal called Jet Propulsion, and within just a few years science fiction went at the topic with gusto. Several writers come immediately to mind, the first being Cordwainer Smith (Paul Linebarger),whose moody fable “The Lady Who Sailed the Soul” ran in Galaxy in 1960. Jack Vance’s “Gateway to Strangeness” (Amazing Stories, August 1962) considered the training of a solar sail crew, the same year Robert Forward began writing about beamed propulsion in the journal Missiles and Rockets. 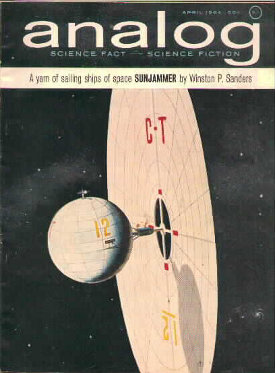 Arthur C. Clarke was an early sail advocate, publishing a story originally called “Sunjammer” in Boy’s Life in 1964. Confusingly, Poul Anderson (writing as ‘Winston P. Sanders’) followed up with a story under the same title in Analog about a month later. The Clarke title, obligingly re-titled “The Wind from the Sun,” remains a classic. Anderson’s “Sunjammer” and Clarke’s “The Wind from the Sun” are helpfully collected in the book I mentioned yesterday, Project Solar Sail, while the Smith story can be found in The Best of Cordwainer Smith, out of print but widely available in used bookstores or online, and the Vance is available in The Best of Jack Vance (1976). Ah, the pleasures of hunting down old books!

As to Project Solar Sail, it’s an indispensable title that should be on your shelf, likewise out of print but worth seeking out. Along with the fiction and poetry by Bradbury as well as Tennyson, you get Robert Forward on lightsails, and Louis Friedman on the interplanetary economy sails might one day make possible, not to mention Eric Drexler’s “The Canvas of the Night,” which looks at how sails might be built in space and deployed throughout the system.

Les Johnson gets into this same issue in Going Interstellar, his newly released collection of essays and fiction from Baen. Building a sail in space instead of launching it from Earth has many advantages. Launching a payload is hugely stressful — you can think of what the inside of a Space Shuttle looks like not long after liftoff — and sails are inherently delicate because the thinner we can make them, the lower the mass and the more effective the design. But even if the sail makes it to low Earth orbit, it must still be deployed. We can get past packaging and deployment issues with relatively small near-term sails, but as we look to a future of sails kilometers on a side, it’s clear that future manufacturing facilities in space would be the preferable option.

All this is easier said than done, of course, but maybe we don’t have to wait for a full factory infrastructure to be placed into Earth orbit to move ahead. Johnson’s thoughts:

There is another approach that takes advantage of the Earth’s well established manufacturing infrastructure and the unique environment of space to solve the manufacturing and launch problems: build the sail on Earth, but make it more robust — thicker — than the mission requires and make the extra thickness out of materials that won’t easily tear when in the Earth’s gravity and that will not damage easily during launch. But, design the more robust sail so that the heaviest part will separate when exposed to a selected portion of the Sun’s ultraviolet light — which only happens when we are above the Earth’s atmosphere. Voila! The thick and heavy sail that was easier to make and launch quickly becomes the wispy, lightweight sail needed for rapid propulsion through interstellar space.

In his “Canvas of the Night” essay, Drexler talks about getting away from sails with plastic backing and creating unbacked aluminum films a few hundred atoms thick. Using the right structural materials, he believes such a sail could be twenty to eighty times lighter than deployable plastic-film sails. But he’s not ready to give up the space manufacture of these sails, noting that learning to build such sails in space would hone our skills at working in this environment even as we built the propulsion systems that would take us deeper into the Solar System.

And what about the vast structures Robert Forward envisioned when he talked about beamed propulsion to a lightsail? A big enough laser could push a crewed starship to Alpha Centauri at 10 percent of lightspeed, but it’s hard to imagine human labor building the 1000-kilometer lens in the outer Solar System that Forward thought would be needed to collimate his huge laser beam. Here again I’m thinking about Drexler, for a future enriched by nanotechnology may offer a solution. No one knows when and if the promise of nanotech will truly arrive, but it’s not inconceivable that given enough time, we will be able to produce the kind of smart assemblers that could use nearby materials to construct large structures in space.

Meanwhile, the path forward is clear: Build ever larger and lighter sails. Experiment with beamed propulsion and consider different kinds of sail materials and interesting prospects like desorption, in which materials painted onto a sail can give it an extra boost (see A Boost for Solar Sails, in which James and Gregory Benford’s sail experiments are discussed). And be aware of the new ideas that the mixing of science with fiction can bring. It’s no surprise to me that a superb science fiction writer like Gregory Benford should be involved in sail studies, or that Arthur C. Clarke saw the promise of solar sailing long before actual sail experiments began.

And speaking of science fiction, read a little Bradbury this weekend. If you’re already familiar with his work, you have your own favorites. If not, I’d suggest either The Martian Chronicles or The Illustrated Man as the best entry points.