The success of the Kepler mission in sifting through a field of more than 150,000 stars to locate transiting planets is undeniable, and the number of planets thus far discovered has been used to estimate how often planets occur around stars like the Sun. Now comes a paper to remind us that statistical analysis based on Kepler results assumes that most of the planet candidates are real and not false positives. Alexandre Santerne, a graduate student at the University of Aix-Marseille, has worked with a team of researchers to study the false positive rate for giant planets orbiting close to their star. 35 percent of these Kepler candidates may be impostors.

The problem is that eclipsing binaries can mimic planetary transits, which is why scientists perform follow-up radial velocity studies or use transit timing variations (TTV) to confirm the existence of the planet. Another technique is to systematically exclude all possible false positive scenarios to a high level of confidence. Whatever the method, it’s clear that validating Kepler’s candidates — making sure that what looks like a planet really is one — has a key role to play if we’re going to interpret the Kepler results properly and extend them to the larger stellar population. 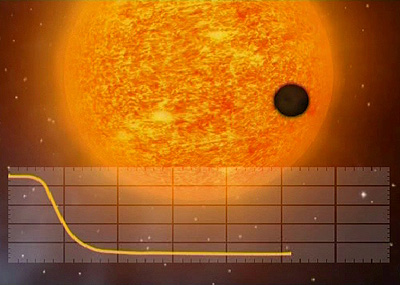 Image: Both Kepler and CoRoT have detected exoplanets by looking for the drop in brightness they cause when they pass in front of their parent star. But as transit studies continue, scientists are working to filter out false positives. Credit: CNES.

Santerne’s team used the SOPHIE spectrograph at Observatoire de Haute-Provence, looking at a selection of Kepler giant planet candidates for follow-up spectroscopic studies. Their sample of 46 candidates represented about 2 percent of the total list of 2321 candidates as of February 2012, and about 22 percent of the giant planet candidates with significant transit depth found thus far in the Kepler data. Their candidates all showed a transit depth greater than 0.4%, an orbital period less than 25 days and a host star brighter than Kepler magnitude 14.7.

Eleven of the candidates had already been confirmed as planets, and the researchers were able to confirm another nine. Two of the candidates turned out to be transiting brown dwarfs and another eleven were in binary star systems. All of that leaves 13 unconfirmed candidates, and leads the team to conclude that the false-positive rate for giant, close-in planets is 35 percent. It’s an interesting result in light of earlier work by Timothy Morton and John Johnson (Caltech), who calculated an expected false positive probability (FPP) of Kepler planets of 5 percent for most candidates.

Morton reacted to the new work in this article in Science News:

…comparisons between the two studies might not be so simple, Morton says, noting that the two groups calculated different things. Instead of looking at impostor rates in a specific population of planets, Morton determined the probability that any candidate — plucked from the sea of twinkling candidates — was real. He also excluded data from obvious impostors.

“Everything here is sort of a game of probabilities,” Morton says, pointing to the abundance of candidates. “It will be impossible to confirm them all with observations.”

The Santerne paper argues that Morton and Johnson did not consider undiluted eclipsing binaries — binary stars that mimic a close-in gas giant — as a source of false positives in the Kepler data, assuming that detailed analysis of Kepler photometry alone would be enough to weed these out. Santerne’s team disagrees:

…we have found that more than 10% of the followed-up candidates are actually low-mass-ratio binary stars, even excluding the two brown dwarfs reported here. This source of false positives is expected to be less important for smaller-radii candidates. However, as it is clearly shown by the cases of KOI-419 and KOI-698, stellar companions in eccentric orbits and with relatively long periods can produce single-eclipse light curves, even for greater mass ratios. It is difficult to imagine how these candidates can be rejected from photometry alone if grazing transits are to be kept.

In other words, it’s easier to mimic a planetary signature than we realized in the case of close-in giant planets. It will take radial velocity follow-up studies of giant planets on much wider orbits to determine whether the false positive rate is as high with them. And we have a lot to do to learn about the reliability of our smaller planet detections:

Only a small fraction of Kepler small candidates are suited for the radial velocity follow-up. These candidates should be followed in radial velocity to determine the true value of FPP and to ﬁll the mass-radius diagram of Neptune and super-Earth like planets. This FPP value for small size candidates is required to correctly derive and discuss the distribution of transiting planet parameters.

The paper is Santerne et al., “SOPHIE velocimetry of Kepler transit candidates VI. A false positive rate of 35% for Kepler close-in giant candidates,” accepted by Astronomy & Astrophysics (preprint). Thanks to Antonio Tavani for the pointer to this one.

Next post: Star Consciousness: An Alternative to Dark Matter