It should come as no surprise to anyone who follows Centauri Dreams that I am a great admirer of Ed Stone, the former director of the Jet Propulsion Laboratory (from 1991 to 2001) and more than any single scientist, the public face of many of our missions to the outer Solar System. Stone’s work on space projects began as far back as 1961 with the cosmic ray experiments he designed for the Discoverer satellites, but it was as project scientist for the Voyager missions that he became a familiar figure to audiences worldwide. His tenure at JPL saw missions like Mars Pathfinder, the Sojourner rover, Deep Space 1 and the launches of Cassini and Stardust. 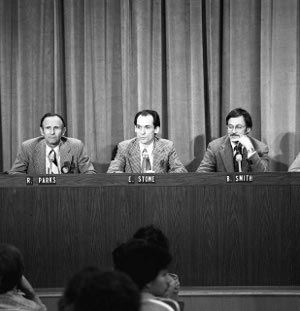 That, of course, is only a partial list, but it gives you the drift. This morning I’m thinking about Stone again because of a quote he provided for a recent JPL news release. Here again he’s talking about the Voyagers, which are pushing up against the edge of the system:

“The laws of physics say that someday Voyager will become the first human-made object to enter interstellar space, but we still do not know exactly when that someday will be. The latest data indicate that we are clearly in a new region where things are changing more quickly. It is very exciting. We are approaching the solar system’s frontier.”

As seems to be a habit of the Voyagers, they are again approaching an exciting encounter. In the other room I still have the VCR tapes I made of Voyager II’s 1989 Neptune flyby — amazing to think it’s been so many years! — and I recall remarking to my wife that night that these doughty machines still had some life in them, and that, who knows, they might keep giving us information for another decade or so. If I had done my homework back then, I would have realized that we might get both spacecraft through to 2020 or so, when the power output of their radioisotope thermoelectric generators will decline too steeply for operations to continue.

A morning check shows that Voyager 1 is 16 hours, 39 minutes and 2 seconds light travel time from us, while its sister ship is 13 hours, 35 minutes and 13 seconds of light travel time away. Impressive for journeys that began in 1977 and a real tribute to our ability to build systems that can last. The Voyagers’ interstellar mission is all about studying not only the Kuiper Belt but the heliosphere and the elusive boundary between the region of the Sun’s influence and true interstellar space. That included the famous ‘Pale Blue Dot’ image showing a group portrait of the Solar System, including the faint Earth, as seen from outside. And while it is true that New Horizons left Earth faster than either Voyager, our Pluto/Charon probe is now moving at 15 kilometers per second, while Voyager 1 maintains a brisk 17.26 kilometers per second.

An indication that interstellar space looms near is that Voyager 1, in the period from early 2009 to early 2012, has measured a 25 percent increase in galactic cosmic rays, with an even more rapid increase in the spring of 2012. The science team will now be watching for a change in the intensity of energetic particles generated inside the heliosphere, a kind of ‘bubble’ of charged particles inflated by our star’s solar wind. A sharp dropoff will be another flag for leaving the system, as will a major change in the direction of magnetic field lines around the spacecraft.

As for Ed Stone, he’s on record as saying that the biggest surprise of the Voyager missions was the discovery of Io’s volcanoes, but he notes that as the missions unfolded, they continually surprised us. Doubtless even our best estimates of the passage into interstellar space will come up short of the reality as we learn more about the boundary through which all future interstellar craft will have to pass. Says Stone:

“When the Voyagers launched in 1977, the space age was all of 20 years old. Many of us on the team dreamed of reaching interstellar space, but we really had no way of knowing how long a journey it would be — or if these two vehicles that we invested so much time and energy in would operate long enough to reach it.”

For that matter, who knew how long we’d be able to work with these spacecraft even if they did approach the margins of the Solar System? The numbers are daunting but our deep-space tracking antennas are up to the job: The signal that the Voyager probes return to Earth is 10-16 watts, which works out to one part in 10 quadrillion. The Voyager Interstellar Mission team notes that a digital watch operates at a power level 20 billion times greater than this, and yet we’re still hoping for another decade or so of data. If power were not a problem (and low hydrazine levels), we might be talking about another century or more of contact with the spacecraft unless they lost their lock on the distant Sun.

And after the Voyagers reach interstellar space? The next boundary will be the region where the Sun’s gravity is no longer dominant, a distance about halfway to the nearest star (although neither spacecraft is pointed at Proxima Centauri). It should take the long-silent Voyagers about 37,000 years to reach that threshold.

Previous post: Titan’s Lakes and the Drive to Explore