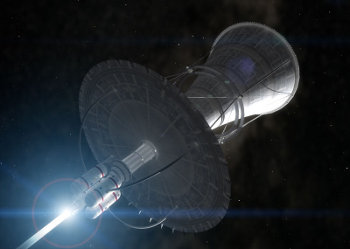 We all carry our assumptions with us no matter where we go, dubious extra baggage that can confuse not just our scientific views but our lives in general. That’s why it’s so refreshing when those assumptions are challenged in an insightful way. Think, for example, of the starship as envisioned by Hollywood. In our times it looks like something produced by the joint efforts of NASA, ESA and other governmental space agencies. No matter how diverse the crew, the model is always based on western culture, the assumptions reflecting our modern ethos.

When an assumption is ripe for questioning, along comes a writer like Michael Bishop. Consider the starship Kalachakra, carrying a crew of 990 to a planet in the Gliese 581 system, as envisioned in Bishop’s ‘Twenty Lights to the Land of Snow,’ a novella in the Johnson/McDevitt book Going Interstellar. Most of the crew spends the flight in hibernation using the wonderfully named drug ursidormizine — thus slumbering ‘bear-like’ — but each crewmember must emerge every couple of years to avoid the deterioration the process creates in the sleeping ‘somnacicles.’

Image: The culture aboard a starship may be nothing like what Hollywood so often envisions. Speculations along these lines are fine fodder for science fiction, and remind us that an interstellar future is multi-disciplinary, demanding our best efforts not just in science but in philosophy, sociology and culture. Credit: Adrian Mann.

Kalachakra carries Free Tibetans escaping a tyrannical government, the most prominent among its crew being the Dalai Lama, who inconveniently dies early on and must be replaced. I won’t get into plot details because in my estimation, the cover price of Going Interstellar would have been justified even if the Bishop story were the only thing in the book. You’ll want to read this for yourself, and anticipate along with me the novel that will surely come out of it. You’ll especially enjoy the defeat of expectations at every turn. Here, for example, is a look into the hangar where the Kalachakra carries the lander that will be used on arrival:

An AG [anti-gravity]-generator never runs in the hangar because people don’t often visit it, and our lander nests in a vast hammock of polyester cables. So we levitated in a cordoned space near the nose of the lander, which the Free Federation of Tibetan Voyagers has named Chenrezig, after that Buddhist disciple who, in monkey form, sired the first human Tibetans. (Each new DL [Dalai Lama] automatically qualifies as the latest incarnation of Chenrezig). Our lander’s nose is painted with bright geometric patterns and the cartoon head of a wise-looking donkey wearing glasses and a beaked yellow hat. Despite this amusing iconography, however, almost everyone on our strut-ship now calls the lander the Yak Butter Express.

That last bit, the donkey in the yellow hat, is just right — no somber United Federation of Planets logo or some such aboard the Kalachakra! In the story, the journey at one-fifth of light speed is funded by a United Nations charter and all sorts of diplomatic maneuvering designed to solve a political crisis by creating a new ‘land of snow’ in the high mountains of Gl 581g’s terminator. Never mind that Gl 581g most likely doesn’t exist, for it was thought to be there when Bishop wrote the story, and it shows up elsewhere in Going Interstellar as well, a reminder of how fast our exoplanet knowledge is changing. The point is, this journey is all about coming of age, learning who you are, and creating meaning out of uncertainty. It’s just a great read.

Perils of the Book Reviewer

Now and again I’m asked about the ‘What I am Reading’ window on the Centauri Dreams main page, and why it takes me so long to get through a book. I’m not actually as slow a reader as it appears. Going Interstellar was up there for several weeks because I never read a single book at a time, but usually have several going simultaneously. I always try to put the book of most interest to my readers up in the window, but I only have room for one. The pace — and the blog format — have changed the way I review books in general. Rather than writing a single, monolithic review as I used to do for newspapers, I’m more prone to write about a book while it’s in progress, coming around to it again and again before moving on to the next volume.

Thus it has been with Going Interstellar, about which a few more thoughts. You’ll recall that this is a collection of essays and fiction, mixing them in the fashion of Arthur Clarke’s 1990 book Project Solar Sail. I had mentioned the similarity before but was startled to find Mike Resnick’s story ‘Siren Song’ at the end of the book. Like the Clarke volume, which includes Clarke’s ‘The Wind from the Sun,’ the Johnson/McDevitt book includes a story about a solar sail race, or I should say in this case a race in which a single solar sail appears. Resnick’s is a moody little evocation of Odysseus that’s less interested in showing solar sailing at work than in mining the mythic ore that our move into the Solar System will invoke.

The fiction in this book is spry and interesting. Along with the Bishop and Resnick, I thought particularly highly of Les Johnson’s ‘Choices’ and Sarah Hoyt’s ‘The Big Ship and the Wise Old Owl,’ which plays entertainingly off the clues afforded by nursery rhymes on a starship journey to reveal the dangerous machinations that may complicate an interstellar arrival. Jack McDevitt’s ‘Lucy’ takes us into the mind of an AI pushed into what can only be called an ‘awakening’ at system’s edge, one that questions our human limitations and makes us wonder just who is likely to make that first interstellar crossing, machine or human? Ben Bova’s ‘A Country for Old Men’ taps into the same theme, with the notion that there are tricks up the sleeve of our species that even the wisest AI may not be able to fathom.

What I appreciate about the mixed format of a book like this is that it keeps you grounded in the possible. The ideas used to get big ships moving into the interstellar deep in these stories are all based on extensions of our current engineering and ideas in line with contemporary physics. We have chapters on antimatter and fusion (Greg Matloff), solar and beamed energy sails (Les Johnson) and Richard Obousy’s introduction to Project Icarus, the ongoing redesign of the British Interplanetary Society’s Project Daedalus starship. I like what Obousy has to say about the project’s objectives, especially in training a new generation of designers:

To maintain the healthy vision of a future where interstellar travel is possible, a new generation of capable enthusiasts is required. Project Icarus was designed with this specific motive in mind, and a quick glance at the Icarus designers reveals an average age close to thirty. Thus, one hope is that upon completion of the project, an adept team of competent interstellar engineers will have been created, and that this team will continue to kindle the dream of interstellar flight for a few more decades until, presumably, they too become grey and find their own enthusiastic replacements.

Starship design brings challenges galore, the chief of these perhaps being the issue of deceleration. As a consultant for Project Icarus, I was privileged to throw my two cents in on the debate over whether Icarus should, like Daedalus, be a flyby mission, or whether incorporating deceleration at the target should be attempted. I was agog at the notion of deceleration given what this would do to the mass ratio, but the more I thought about it, the more I came around to the idea that the team was right. A flyby gives you precious little data for the decades you’ve spent reaching the target, and sooner or later we’re going to have to face the deceleration problem, so better to get working on it now. A solution to this problem alone would be an unforgettable contribution to interstellar studies, if Project Icarus can provide one.

There’s much more of interest in Obousy’s essay, including the fact that the inertial confinement fusion strategy favored by the Daedalus designers — firing deuterium and helium-3 pellets into a reaction chamber at a rate of 250 pellets per second, where they are ignited by electron beams — calls for an improvement of 21 million times over the ignition rate expected from the National Ignition Facility at Lawrence Livermore Laboratory. To say there is much work to be done is to state the obvious, a fact cheerfully acknowledged by this band of visionary designers.

In any case, I’ve rambled on about Going Interstellar without getting into the meat of several of its essays, but I’ll be drawing on these in coming days as we look at further propulsion possibilities. We’re also going to be looking at how rocketry studies were influenced by science fiction in the era between the two World Wars as I draw on John Cheng’s Astounding Wonder: Imagining Science and Science Fiction in Interwar America (University of Pennsylvania Press, 2012). The new book up in the ‘What I Am Reading’ window is Kelvin Long’s Deep Space Propulsion (Wiley, 2011).

Have I mentioned that I need new reading glasses? I’ll have to get them soon because interstellar ideas are popping up all over the place. I also have Centauri Dreams reader Jim Essig’s new title Call of the Cosmic Wild (2012) ahead. And although it’s not on an interstellar theme, I’m soon going to be talking about Mark Anderson’s The Day the World Discovered the Sun (Da Capo, 2012), received too late to read before the transit of Venus, but telling a tale of transit study in the 18th Century that reminds us what minds fired by curiosity can do with the tools of their time. We’re not in so different a position than those 18th Century astronomers who set sail around the globe to view the 1769 transit. Like them, we work with tools that following ages will find primitive, and in starship terms, our goals are far beyond our grasp. It is the hope of closing that gap even a little that impels the interstellar community to keep trying.