I’ve always had an interest in old travel books. A great part of the pleasure of these journals of exploration lies in their illustrations, sketches or photographs of landscapes well out of the reader’s experience, like Victoria Falls or Ayers Rock or the upper reaches of the Amazon. Maybe someday we’ll have a travel literature for exoplanets, but until that seemingly remote future, we’ll have to use our imagination to supply the visuals, because these are places that in most cases we cannot see and in the few cases when we can, we see them only as faint dots.

None of that slows me down because imagined landscapes can also be awe-inspiring. This morning I’m thinking about what it must be like on the molten surface of the newly discovered world Kepler-36b, a rocky planet 1.5 times the size of Earth and almost 5 times as massive. This is not a place to look for life — certainly not life as we know it — for it orbits its primary every 14 days at a scant 17.5 million kilometers. But if we could see the view from its surface, we would see another planet, a gaseous world, sometimes appearing three times larger than the Moon from the Earth.

That may sound like a view from the satellite of the larger planet, but in this case we have two planets orbiting closer to each other than any planets we’ve found elsewhere. The larger planet, Kepler-36c, is a Neptune-class world about 3.7 times the size of the Earth and 8 times as massive. While the inner world orbits 17.5 million kilometers from its star, Kepler-36c takes up a position a little over 19 million kilometers out, making for a close orbital pass indeed. Conjunctions occur every 97 days on average, at which point no more separates the two worlds than about 5 Earth-Moon distances. Now that would make for quite an image, but rather than just sketching a huge planet in the sky, the University of Washington’s Eric Agol, one of the researchers on this work, decided to show the unknown in terms of the familiar, as below: 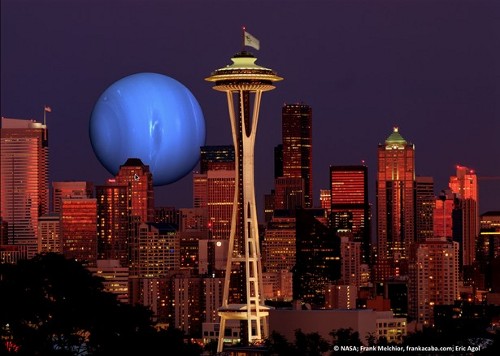 Image: Sleepless in Seattle? This view might keep you up for a while. Adapted by Eric Agol of the UW, it depicts the view one might have of a rising Kepler-36c (represented by a NASA image of Neptune) if Seattle (shown in a skyline photograph by Frank Melchior, frankacaba.com) were placed on the surface of Kepler-36b. Credit: Eric Agol/UW.

We can only imagine the kind of gravitational effects the two planets are having on each other. It’s interesting to see as well the powerful uses the researchers, who report their work in Science Express this week, have made of asteroseismology, as noted in this news release from the Harvard-Smithsonian Center for Astrophysics. The sound waves trapped inside Sun-like stars set up oscillations that an instrument like Kepler or CoRoT can measure. Bill Chaplin (University of Birmingham, UK), a co-author of the paper on this work, says this:

“Kepler-36 shows beautiful oscillations. By measuring the oscillations we were able to measure the size, mass and age of the star to exquisite precision. Without asteroseismology, it would not have been possible to place such tight constraints on the properties of the planets.”

The more we know about the parent star, in other words, the better we can interpret the lightcurves we are gathering as we observe planetary transits. The pattern we’re familiar with in our own Solar System — rocky planets closer to the Sun, gas giants in the outer system — breaks dramatically here with two worlds of different compositions and densities in remarkably tight orbits. At Iowa State University, researcher Steve Kawaler was on the team that worked on these data. Kawaler describes the situation in a news release from the university:

“Small, rocky planets should form in the hot part of the solar system, close to their host star – like Mercury, Venus and Earth in our Solar System. Bigger, less dense planets – Jupiter, Uranus – can only form farther away from their host, where it is cool enough for volatile material like water ice, and methane ice to collect. In some cases, these large planets can migrate close in after they form, during the last stages of planet formation, but in so doing they should eject or destroy the low-mass inner planets.

“Here, we have a pair of planets in nearby orbits but with very different densities. How they both got there and survived is a mystery.”

Indeed, we have two planets whose densities differ by a factor of eight in orbits that differ by a mere 10 percent, offering a real challenge to current theories of planet formation and migration. The star, Kepler-36a, is about as massive as the Sun but only about 25 percent as dense, and it has somewhat lower metallicity. Researchers believe it is several billion years older than our star and has entered a sub-giant phase to attain a radius about 60 percent greater than the Sun’s.

We can hope that extreme systems like this can help us refine our thinking on planetary migration and its effects. The planets in this system, some 1200 light years from Earth in the constellation Cygnus, are puzzling but doubtless not alone in representing unusual configurations of the kind we’ll see more of as we continue to sift the Kepler results. The paper is Carter et al., “Kepler-36: A Pair of Planets with Neighboring Orbits and Dissimilar Densities,” published online in Science Express June 21, 2012 (abstract). See also this news release from the University of Washington.