Uses of a Forgotten Cluster

Astronomical surprises can emerge close to home, close in terms of light years and close in terms of time. Take NGC 6774, an open cluster of stars also known as Ruprecht 147 in the direction of Sagittarius. In astronomical terms, it’s close enough — at 800 to 1000 light years — to be a target for binoculars in the skies of late summer. In chronological terms, the cluster has had a kind of re-birth in our astronomy. John Herschel identified it in 1830, calling it ‘a very large straggling space full of loose stars’ and including it in the General Catalog of astronomical objects.

But NGC 6774 remained little studied, and it took a more intensive look by Jaroslav Ruprecht in the 1960s to give the cluster both a new name and a firmer identity. This loose group of stars had long been thought to be an asterism, a chance alignment of stars that when seen from the Earth gave the impression of being a cluster. Ruprecht realized this was no asterism, and now new work with the MMT telescope in Arizona and the Canada-France-Hawaii Telescope on Mauna Kea is telling us that this cluster is, at about 2.5 billion years old, about half the age of the Sun. In fact, it’s about the age the Sun was when multicellular life began to emerge on our planet’s surface. 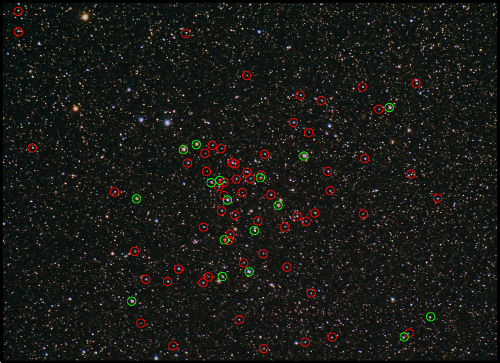 Image: Penn State University astronomers have determined that 80 of the stars in this photo are members of the long-known but underappreciated star cluster Ruprecht 147. In this image, the brightest of these stars are circled in green, and the less-bright ones are circled in red. These stars were born out of the same cloud of gas and dust approximately 2-billion years ago, and now are traveling together through space, bound by the force of gravity. The astronomers have identified this cluster as a potentially important new reference gauge for fundamental stellar astrophysics. Credit: Chris Beckett and Stefano Meneguolo, Royal Astronomical Society of Canada. Annotations by Jason Curtis, Penn State University.

Jason Wright (Penn State University) has been working on NGC 6774 with graduate student Jason Curtis, who will present the new findings in an upcoming conference in Barcelona, the 17th Cambridge Workshop on Cool Stars, Stellar Systems, and the Sun. Wright sees the significance of the cluster in terms of exoplanets and the stars that host them:

“The Ruprecht 147 cluster is very unusual and very important astrophysically because it is close to Earth and its stars are closer to the Sun’s age than those in all the other nearby clusters. For the first time, we now have a useful laboratory in which to search for and study bright stars that are of similar mass and also of similar age as the Sun. When we discover planets around Sun-like and lower-mass stars, we will be able to interpret how old those stars are by comparing them to the stars in this cluster.”

Most of the other nearby clusters are much younger than the Sun, making such comparisons less helpful, and it is work of Wright’s team that has demonstrated the cluster’s age as well as distance from Sol. These observations take in the directions and velocities of the stars in the cluster, showing that they are indeed moving together through space and are not a random pattern in the sky. Thus far 100 stars have been identified as part of the cluster but as the project continues, more are expected to be found. All told, NGC 6774 may become what Wright calls “a standard gauge in fundamental stellar astrophysics,” a helpful measuring stick in our neighborhood that can help us tighten up our age estimates of Sun-like, low mass stars.

The NGC 6774 work has been submitted to the Astronomical Journal. This Penn State news release has more.