Although I want to move on this morning to some interesting exoplanet news, I’m not through with fusion propulsion, not by a long shot. I want to respond to some of the questions that came in about the British ZETA experiment, and also discuss some of Rod Hyde’s starship ideas as developed at Lawrence Livermore Laboratory in the 1970s. Also on the table is Al Jackson’s work with Daniel Whitmire on a modified Bussard ramjet design augmented by lasers. But I need to put all that off for about a week as I wait for some recently requested research materials to arrive, and also because next week I’m taking a short break, about which more on Monday. 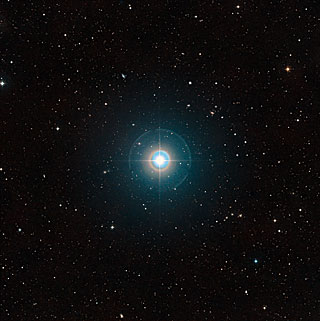 For today, then, let’s talk about an advance in the way we study distant solar systems, for we’re finding ever more ingenious ways of teasing out information about exoplanets we can’t even see. The latest news comes from the study of Tau Boötis b, a ‘hot Jupiter’ circling its primary — a yellow-white dwarf about 20 percent more massive than the Sun — with an orbital period of 3.3 days. An international team has been able to measure the mass of this planet even though it is not a transiting world. The work, published in Nature and augmented with another paper in Astrophysical Journal Letters, opens up a new way to study not just the mass of exoplanets but also their atmospheres, whose signature is a key part of the work.

Image: This image of the sky around the star Tau Boötis was created from the Digitized Sky Survey 2 images. The star itself, which is bright enough to be seen with the unaided eye, is at the centre. The spikes and coloured circles around it are artifacts of the telescope and photographic plate used and are not real. The exoplanet Tau Boötis b orbits very close to the star and is completely invisible in this picture. The planet has only just been detected directly from its own light using ESO’s VLT. Credit: ESO/Digitized Sky Survey 2.

51 light-years away in the constellation of Boötes (the Herdsman), Tau Boötis b was discovered by Geoff Marcy and Paul Butler in 1996 through radial velocity methods, which measure the gravitational tug of the planet on its host star. Picking up the stellar ‘wobble’ flags the presence of a planet but leaves us with a wide range of mass possibilities because the angle of the planet’s orbit around the star is unknown. Thus a gas giant at a high angle to the line of sight could show the same signature as a smaller planet at a lower angle. For that reason, we’ve been limited with radial velocity to setting just a lower limit to a planet’s mass.

Transits work better for determining mass because we can measure the lightcurve of the planet as the star’s light dips during the transit, adding that to the radial velocity findings to work out both mass and radius. We’ve also been able to study exoplanet atmospheres in transiting worlds, looking at the star’s light and subtracting out the atmospheric signature. But transiting worlds are uncommon, dependent on the chance alignment of the system with our line of sight. What this new work provides is a way to study non-transiting worlds at a higher level of detail, down to investigating the composition of their atmosphere. Future telescopes should be able to apply these techniques far beyond the realm of hot Jupiters like Tau Boötis b.

What Matteo Brogi (Leiden University) and team did was to use the high-resolution CRIRES spectrograph on the Very Large Telescope at the European Southern Observatory’s Paranal Observatory in Chile to study the light from this system and determine the exquisitely fine changes in wavelength caused by the motion of the planet around the star. The observations at near infrared wavelength (2.3 microns) worked with the signature of carbon monoxide in the atmosphere, which allowed the researchers to work out the angle (44 degrees) that Tau Boötis b orbits the primary. Brogi, lead author of the paper on this work, comments:

“Thanks to the high quality observations provided by the VLT and CRIRES we were able to study the spectrum of the system in much more detail than has been possible before. Only about 0.01% of the light we see comes from the planet, and the rest from the star, so this was not easy.”

The hope is that the technique can be used in future studies to look for molecules associated with life. We’re a long way from that result, but this first step tell us how exciting the era of the new giant observatories — think the European Extremely Large Telescope and its ilk — is going to be. Tau Boötis b turns out to be about six times as massive as Jupiter, as determined through the displacement of the spectral lines of the detected carbon monoxide, and the team intends to look for other molecules in its atmosphere as the studies continue. Larger instruments will allow us to move far beyond the limited range of transiting worlds to tighten our knowledge of distant exoplanet systems, a step forward in the refinement of radial velocity techniques.

The paper is Brogi et al., “The signature of orbital motion from the dayside of the planet τ Boötis b,” Nature 486 (28 June 2012), pp. 502-504 (abstract). See also Rodler et al., “Weighing the Non-Transiting Hot Jupiter τ Boo b,” Astrophysical Journal Letters Vol. 753, No. 1 (2012), L25 (abstract). A news release from the European Southern Observatory is also available, as is this release from the Carnegie Institution for Science. Thanks to Antonio Tavani for the pointer to this work.