Galileo Galilei makes a brief appearance in the news this morning with word that several copies of his books, including two examples of the Sidereus Nuncius, have turned out to be forgeries. The latter, whose title is usually translated as Starry Messenger, was the first scientific presentation on observations made with a telescope, and contains Galileo’s early work on the Moon and the moons of Jupiter, among other things. One Marino Massimo De Caro, currently under arrest for massive thefts from the Girolamini Library in Naples, may have had connections with the forgeries, which are worrisome news for those of us who like to poke around in ancient manuscripts and for anyone interested in the history of science.

News of the manuscripts also puts me in mind of a paper by Danielle Briot (Observatoire de Paris), which uses Galileo in quite a different context. Briot became interested in the life and work of Ary Sternfeld (1905-1980), a prolific writer on science and a researcher who may have been the first to have used the word ‘astrobiology,’ although his work is all too little known today. Sternfeld’s 1935 article “La vie dans l’Univers” in the French science magazine La Nature looked at beliefs and hypotheses about life in the cosmos and reached conclusions remarkably similar to those under active investigation in today’s journals. 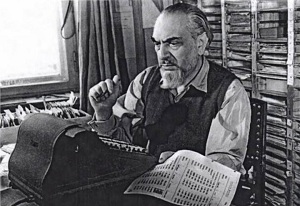 In fact, in discussing the state of the art in research into these matters, Sternfeld wrote as follows: “The development of both the natural and astronomical sciences has led to birth of a new science whose main objective is to assess the habitability of the other worlds… this science is called astrobiology.” Briot believes this is the first time the word ‘astrobiology’ appears, and it is followed up — just two years after Hitler assumed power in Germany and the German military buildup was just beginning — with a review of theories on the origin of life and even considerations about how it might be transported through space. Sternfeld thought extraterrestrial life was likely and wondered how we would discover planets around other stars.

Image: Ary Sternfeld at work, an astronautical pioneer whose work is only now being rediscovered in the west.

Galileo swings back into the discussion because the 77 years that have passed between the publication of Sternfeld’s paper and today is roughly the same interval between the publication of the Sidereus Nuncius (1610) and Fontenelle’s Entretiens sur la pluralité des mondes (Conversations on the Plurality of Worlds) in 1686. What’s striking about this is that between Galileo and Fontenelle there is a world of new thinking as an observation-enriched view of the cosmos emerged, whereas the Sternfeld paper offers a view of the universe that, with the exception of its model of planet formation, is one that could have come out of a recent science magazine.

Bernard Le Bovier de Fontenelle (1657-1757, a remarkable lifetime!) spoke to the general public in his Conversations, drawing on not just Galileo but also Copernicus, whose De revolutionibus orbium coelestium (On the Revolutions of the Celestial Spheres) had appeared in 1543. The language, significant in a scientific work at the time, was not Latin but French, presenting the conversations between a philosopher and a nobleman as they study the stars on a late-night walk. Between the time of Galileo and Fontenelle we have moved into a world keen to know more about the immensity of the universe and actively speculating on life around other stars.

If Fontenelle was a man of his time, Briot gives the impression that Sternfeld was very much ahead of his, at least where ideas about extraterrestrial life are concerned. His own life was a good deal more restricted. Born in Poland in 1905 of Jewish parents, he was unable to attend the Polytechnical School in Warsaw because of his religion and moved to France in 1924, although his application to do a doctorate in astronautics at the Sorbonne was rejected. Even so, by 1933 he had written a book on the discipline he called ‘cosmonautics,’ presenting calculations on spacecraft trajectories that proved accurate though written 25 years before Sputnik.

Briot has the rest about this remarkable man who published in both popular and professional periodicals in France and speculated actively on SETI methods using optical and radio technologies as early as 1935. It was later in that year that he and his wife moved to the Soviet Union, where he narrowly survived Stalin’s purge of Russian scientists in 1938, going on to write some 30 books and over 400 articles in a wide variety of venues. Sadly, he was not allowed a visa to return to France even when he received an honorary doctorate there in 1961. Sternfeld died in 1980 and his name is engraved on a small plaque aboard the New Horizons spacecraft honoring the pioneers of astronautics. A crater on the far side of the Moon also bears his name.

In 2010 the Space Research Center of the Polish Academy of Science (CBK PAN) organized a conference to commemorate the work of Ary Sternfeld. Although he could not attend in person, Mike Gruntman (USC) produced a video that was played at the meeting and can be seen online. The Briot paper is “Is it the first use of the word Astrobiology?” (preprint). Be aware, too, of Gruntman’s From Astronautics to Cosmonautics (2007), which describes the work of Sternfeld as well as Robert Esnault-Pelterie, another figure we’ll need to talk about soon in these pages.