An interstellar movement has been brewing for the past sixty or so years among physicists and engineers who have taken a serious look at what it would take to get to the stars. Their work is not based on wishes but on physics, and while they are aware of the intractable distances to reach even the nearest star (4.2 years at the speed of light itself), they have continued to study how to send spacecraft on such epic journeys. Organizations have emerged — DARPA’s 100 Year Starship, Icarus Interstellar, the Tau Zero Foundation — whose members call to mind physicist Robert Forward’s injunction: “Travel to the stars is difficult but not impossible.”

Centauri Dreams readers know all this, but at least on the basis of Adam Frank’s op-ed Alone in the Void, many readers of The New York Times do not. A professor of physics and astronomy himself (University of Rochester), Frank is well versed in the problems of distance and time and understands how difficult it will be to send humans to the stars any time soon. But while acknowledging the ‘exciting theoretical research’ on unmanned vehicles currently underway (Project Icarus is an ongoing design study for such an unmanned probe), he leaves the implication that rapid interstellar travel is nothing more than a Hollywood fantasy.

Yet ever since the first serious studies of interstellar propulsion began in the 1950’s, numerous concepts for crossing the starry gulf have been examined that violate no laws of physics and could well be achieved by a civilization with the technology our grandchildren — or their children — may have at their disposal. We can’t get a huge space sail to ten percent of lightspeed by beaming a powerful laser at it, but our descendants may have the energy resources to do just that. We’ve been looking in these pages at ramjet concepts that in some cases use interstellar hydrogen and in others tap energy from X-ray lasers, while others examine the potential of nuclear fusion. A century from now we may have learned how to use antimatter in rockets. 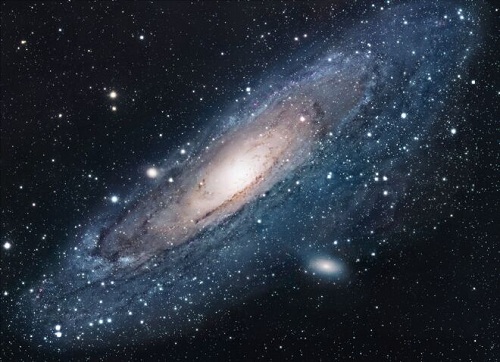 Image: The Andromeda galaxy reminds us how vast cities of stars like the Milky Way really are. Will humans ever be able to leave our Solar System and reach even the closest stars? Credit: Bill Saxton, AUI, NRAO, NSF.

History reminds us that while progress is not inevitable, it can move quickly once unleashed, as the digital revolution of the last few decades attests. Our advances in computers may be complemented by a nanotechnology that will allow us to lower payload mass and make the propulsion problem a little less intractable. These concepts aren’t yet focused on human interstellar flight but there is no reason why taking the first steps in examining them couldn’t eventually lead to that outcome. But what Frank is saying is that going to the stars is such a long-term prospect that we might as well consign the idea to the realm of magic.

For the concepts I’ve cited simply don’t appear in Frank’s essay, nor does he mention the work of NASA’s Breakthrough Propulsion Physics project, or the recently published Frontiers of Propulsion Science, which collects essays from leading theorists on the latest research and how it might be applied. Instead, he focuses on Hollywood:

From “Star Trek” to “Star Wars,” from warp drive to hyperdrive — the idea of rapid interstellar space travel is such a deep meme for cultural visions of space and our future that Hollywood films don’t even have to waste time introducing them to the audience. You pull a lever and zap — you are in a new star system. How many people would be surprised to know that warp drive isn’t even a coherent concept, let alone a near-future technology?

Starflight and the Human Lifetime

Does warp-drive — if it ever becomes possible — have to be a near-future technology for us to study it? Here I question Frank’s assumptions, because the curse of our times is our focus on short-term results, and our unwillingness to look beyond our own lifetimes. The warp drive under question would not violate Einstein’s Special Relativity because rather than moving an object through spacetime, it would manipulate spacetime itself, an operation requiring vast amounts of energy but one on which there is no such speed limit. No one knows whether these investigations — or those into ‘wormholes’ that could be traversed to connect remote parts of the universe — will ever bear fruit. It is safe to say, however, that if we dismiss any study of these concepts we have guaranteed a negative result, and why do so?

Frank goes on to describe what he calls ‘an inconvenient truth’:

While our children’s children’s great-grandchildren will live with ever more powerful technology, they will also live ever more intimately with ever more billions of others in this, our corner of the cosmos. Looking back and forward, my bets are now on that same human genius, ambition and hope to rise to the occasion. We will have no other choice. There will be nowhere else to go for a very long time.

Who could doubt that this vision, of humans living on an ever more crowded Earth, is likely to come to pass whether or not we develop human interstellar flight? And yes, learning how to live with each other is not a matter of choice as our technology and our weaponry become ever more advanced. But the interstellar movement notes several other key points, and I bet on its genius, ambition and hope. Even as our species nurtures the home world, we live in a dangerous environment whose history has been punctuated by mass extinctions, some of them caused by impacts from space debris.

Getting representatives of humanity off this planet is an insurance policy that guarantees our survival. Let’s forget fast travel for the moment and take an evolutionary view of what could occur. Human expansion into the Solar System involves developing new propulsion technologies to help us change the trajectory of potentially dangerous impactors like asteroids. In doing this, we master techniques for living in space that result in large habitats off-planet. None of this violates any laws of physics and invokes no magic, but it potentially leads to self-sustaining colonies, born and bred in space, spreading out on millennia-long interstellar journeys.

Of Vision and Commitment

Focused attention can be disruptive, as physicists and engineers go to work on problems that seem intractable, and we cannot know what might rapidly accelerate the time-frame for interstellar flight. But a commitment of a small part of our resources to studying how we might one day move out into the stars is a long-term investment whose outcome may surprise us. History shows that humans are a visionary and exploring species. We will move into the cosmos if we can because it is in our nature, and it is the nature of researchers in today’s interstellar movement to take the small steps of foundation-building that may lead to a grand structure in the future.

Frank is certainly correct that the time-scale is long and the result unsure, and he’s also right that Hollywood versions of star travel have simplified it to the point of absurdity. No one can guarantee that humans will ever travel to the stars, but it is a dead certainty that giving up in despair will leave the outcome in no doubt whatsoever. Meanwhile, interstellar theorists learn patience. They have to, for they understand that the first interstellar probes, even the unmanned ones, surely won’t fly in their lifetime. Why should this be so hard to explain to the readers of a great newspaper? Since when did we lose the ability to see beyond our own mortality, building a vision that someone we’ll never know in a century we’ll never see can finally make real?