Gl 581: The Case for Habitable Planets

Not long ago, while making a presentation about possible destinations for an interstellar probe, I called Gl 581d the most likely candidate for habitability yet discovered among nearby stars. I knew the planet was problematic, perhaps too far on the outer edge of the habitable zone to be a realistic candidate, although this seems to depend on a variety of factors including atmospheric modeling. But what I had really been pondering in deciding whether or not to include Gl 581d in the talk was whether its purported sister world, Gl 581g, should be brought into play.

Steven Vogt (UC-Santa Cruz) and colleagues were getting ready to distribute their new paper making a further case for a super-Earth in the habitable zone, one that seemed to be ideally placed for liquid water to exist on the surface. Bring that into the discussion?

I decided against it, because the controversy over this world continues and Centauri Dreams seems a better venue than a short public talk to get into the details. Let’s begin here, then, with Michel Mayor and the Geneva team, who had already identified four planets in the system, including Gl 581c, itself a target of speculation about whether or not it might be in the habitable zone. But Gl 581c looks to be too hot to support life, leading to the renewed interest in Gl 581d. This work was accomplished using data from the HARPS spectrograph on ESO’s 3.6m La Silla instrument.

What Vogt and team did in 2010 was to combine the earlier HARPS data with 122 additional measurements made using the HIRES spectrometer at the Keck Observatory on Mauna Kea. It was from this combined dataset that Vogt drew evidence of two new planets: Gl 581f (with an orbital period of 433 days) and Gl 581g, with a period of 36.5 days. It wasn’t long after this that Francesco Pepe (Observatoire de Genève) added another 60 HARPS measurements to the earlier ones and announced his team could not confirm the presence of either of the two worlds Vogt had found. In his new paper, Vogt’s team questions whether Gl 581f or Gl 581g would have been detectable using the 179-point HARPS data set on its own.

I’m moving through the details here quickly — the paper is available on the arXiv site and I encourage you to look at it. But new work by Thierry Forveille (Institut de Planetologie et d’Astrophysique de Grenoble) added another full observing season of HARPS data and still found no trace of Gl 581f or Gl 581g. It’s this set of expanded HARPS radial velocity data that Vogt’s new paper goes to work on, and it reaches a significantly different conclusion (F11 in the excerpt below refers to Forveille’s paper):

… we have shown in the present work that the F11 Keplerian solution is dramatically unstable over a wide range of starting conditions, and is thus untenable. F11’s conclusion of there being only four planets in the system was based on this unphysical model and can thus be discounted. Furthermore, the data points that were apparently omitted from the F11 analysis were dropped solely based on deviation from their 4-planet model, thus unfairly and speciﬁcally suppressing evidence for any additional planets in the system.

Things are, as you can see, heating up. What Vogt is talking about is that his simulations of the Forveille Keplerian models — with the Gl 581 planets in eccentric rather than circular orbits — showed that these orbits were unstable. This is important because Forveille used the Keplerian model in assessing the likelihood of the existence of Gl 581f and Gl 581g. In fact, among 4000 eccentric orbit simulations, not one survived beyond 200,000 years, with only 24 surviving for at least 20,000 years. All 4000 simulations ended with a collision between the two inner planets. By contrast, all 4000 simulations based on circular orbits turn out to be stable for at least 100,000 years. 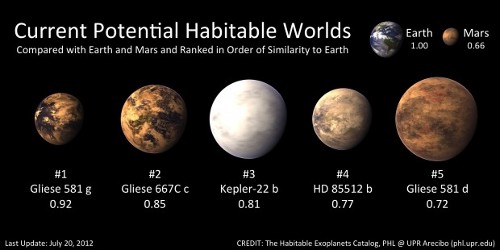 Contrary to F11’s conclusions, we ﬁnd that the full 240-point HARPS data set, when properly modeled with self-consistent stable orbits, by and of itself actually offers conﬁrmative support for a ﬁfth periodic signal in this system near 32-33 days, and is consistent with the possibility of having been detected as GJ 581g at its 36-day yearly alias period by V10. The residuals periodograms both of our interacting and non-interacting ﬁts and of the F11 four-planet circular ﬁt reveal distinct peaks near 32 days and 190 days. Both of these residuals peaks are largely simultaneously accounted for by adding a ﬁfth planet at 32.1 days to the system.

According to Vogt, we wind up with a planet with minimum mass of 2.2 times that of Earth orbiting at 0.13 AU, “solidly in the star’s classical liquid water Habitable Zone.” That, at least, is what the data analysis produces if we assume circular orbits of the four known planets and work out the reasons for the further perturbations that Vogt’s team sees as evidence for a fifth planet. Vogt believes a 5-planet model with all circular orbits trumps a 4-planet model with eccentric planetary orbits, but adds that it may take time and further data to give a definitive answer.

What to make of all this? Gl 581 is offering us an instructive example of how tricky exoplanet analysis can be. Here we’re looking at radial velocity data showing Doppler shifts in the light of the star that result from the gravitational pull of multiple planets orbiting it. You can see how complicated a problem this is, and how multiple solutions can suggest themselves. I find myself pulling for Vogt’s team because I want a planet in the habitable zone to exist somewhere near our Sun (Gl 581 is about 20 light years from us), and the new paper is compelling. But we haven’t heard the last of this exoplanet flap, and how it will end is anyone’s guess.

The paper is Vogt et al., “GJ 581 update: Additional Evidence for a Super-Earth in the Habitable Zone,” accepted for publication in Astronomische Nachrichten (abstract). The Forveille paper is “The HARPS search for southern extra-solar planets XXXII. Only 4 planets in the Gl~581 system,” submitted to Astronomy & Astrophysics (abstract).