Gliese 581 is an utterly maddening star, one that continues to tantalize us with potential habitability. The case of Gl 581g, examined here yesterday, is only the latest wrinkle, but it’s in some ways the most frustrating. We’re studying planets we cannot actually see, inferring their presence through the tiniest of variations in starlight caused by the planets’ gravitational effect on their star. Adjust planetary orbits here in the direction of eccentricity and you can make Gl 581g disappear. Assume circular orbits and you can produce a habitable zone super-Earth.

I think we’ll still be arguing about this one for some time, but in the interim the question will lose a lot of its force. Remember, the reason we’re so excited about Gl 581g is that it would become the closest planet with the possibility of liquid water at the surface (possibly joined by Gl 581d in the same system). But Jean Schneider’s Exoplanet.eu catalog shows 777 confirmed planets this morning, and Kepler has pulled in 2,321 planetary candidates, 246 of which are 1.25 times Earth’s radius or less. In short, habitable planets are not going to be uncommon for long.

Remember, too, that while Kepler has found 46 candidates orbiting within the habitable zones of their stars, we’re soon going to be seeing truly Earth-class planets, worlds that orbit at about our planet’s distance from a star like the Sun. It takes three transits to flag one of these, but as the Kepler mission winds on, the focus will shift at least for a time from habitability around problematic red dwarf stars and on to planets so like ours that they will seize the imagination. And who knows, we may yet find something interesting around the Alpha Centauri stars, close to home indeed. Three ground-based radial velocity studies continue to probe these stars.

So let the Gl 581g controversy have its moment in the press. We should be thinking ahead to the possibilities of missions like the Transiting Exoplanet Survey Satellite (TESS), which could go to work on stars closer to the Sun than those in the Kepler or CoRoT catalogs. We have to run missions like TESS and the European Space Agency’s PLATO (PLAnetary Transits and Oscillations of stars) on the cheap in an era when the big-ticket planet hunters like Darwin and Terrestrial Planet Finder have been placed on hold, but they could at least help us fill in the nearby exoplanet catalog while we wait for better budgets and missions that will be able to detect biomarkers. 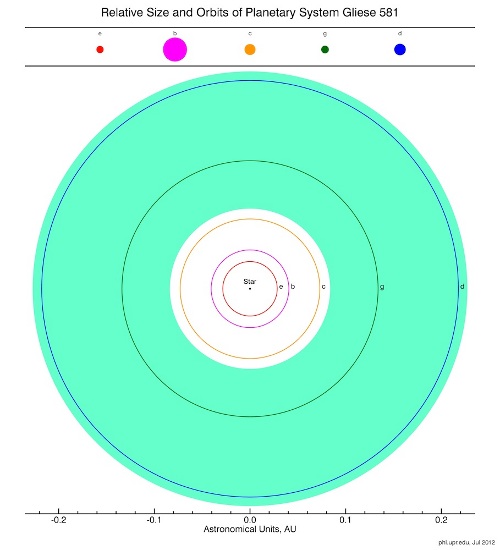 Image: Comparison of the estimated relative size and orbits of the five possible exoplanets around Gliese 581. The green shade represents the size of the habitable zone, or the orbital region where an Earth-size planet could have surface liquid water. Planets e, b, and c are too hot for liquid water and life but g and d are in the habitable zone. Planet g is specially in the right spot for Earth-like conditions while d is marginally within these limits, and colder. This is the first case of a stellar system with two potential habitable exoplanets orbiting the same star, assuming Gl 581g exists. Credit: Planetary Habitability Laboratory/University of Puerto Rico at Arecibo.

While we wait, consider that the five possibly habitable exoplanets shown in the illustration for yesterday’s post are all fairly large. The disputed Gl 581g, if it exists, is at least twice as massive as the Earth, while its sister world Gl 581d is seven times as massive and, as the image above shows, orbits at the extreme outer edge of the classical habitable zone. Kepler-22b — the first known transiting world to orbit inside the habitable zone — looks to be about 2.4 times as wide as the Earth with a mass only roughly estimated at something like Neptune’s.

The above are among the five planets chosen by the Planetary Habitability Laboratory of the University of Puerto Rico at Arecibo as ‘the best five objects of interest for Earth-like exoplanets,’ a list that within months will be undergoing convulsions as new discoveries are announced. About Gl 581g, PHL’s Abel Méndez says “The controversy around Gliese 581g will continue and we decided to include it to our main catalog based on the new significant evidence presented, and until more is known about the architecture of this interesting stellar system.”

Fair enough, and PHL also adds two other interesting worlds. HD 85512b is a super-Earth about 3.6 times as massive as the Earth some 35 light years out, while Gl 667Cc is 4.5 times as massive as the Earth, orbiting a red dwarf some 22 light years out that is part of a triple-star system. Those distances are right in the neighborhood compared to Kepler-22b’s 600 light year distance, but we can expect even closer worlds as our studies continue. After all, as Kepler chief scientist William Borucki told The Economist in a recent article:

“The data so far suggest that most stars have planets, and we see quite a few of those in the habitable zone. So I suspect there’s nothing particularly special about planets at such distances.”

Dr. Borucki is surely right, and we should also keep in mind that we’re getting better and better at finding smaller planets. A few years from now, our five top prospects for habitable worlds are all going to look a lot more like the Earth.

Meanwhile, we enter the weekend with all eyes on a search for habitability much closer to home. Gale Crater on Mars has the advantage of being accessible — assuming the Curiosity rover’s elaborate landing system delivers it safely — and ideal for analysis by the rover’s high-tech laser and drill, along with its instruments for studying atmospheric methane. Finding solid evidence of life, past or present, on Mars is not crucial for the exoplanet hunt, but I suspect that its discovery would give a lift to those seeking habitable planets around other stars. Show us a nearby ‘second genesis’ and our thoughts will soar to the billions of habitable worlds that fill the galaxy.