After Curiosity (whew!), Thoughts on Enceladus

At $2.5 billion, NASA’s Curiosity rover didn’t cost quite as much as Cassini ($3 billion), but what a relief to Solar System exploration both near and far to have it safely down at Gale Crater. This Reuters story tells me that 79 different pyrotechnic detonations were needed to release ballast weights, open the parachute, separate the heat shield, detach the craft’s back shell and perform the rest of the functions needed to make this hair-raising landing a success. All of this with a 14-minute round-trip radio delay that left mission engineers as no more than bystanders.

Congratulations to the entire Curiosity team on this triumphant event! As we now move into the next several weeks checking the six-wheeled rover and its instruments out for exploration, let’s ponder future targets beyond the Red Planet. For at some point, no matter what we find on Mars, we’re going to want to push on to the outer planets, where intriguing moons like Titan, Europa and Enceladus await. The latter’s stock seems to be rising, as witness this recent article in The Guardian forwarded by Andy Tribick. Although they face major challenges, astrobiological missions to Enceladus offers rich prospects indeed. Two are being studied, and it’s easy to see why.

Increasingly, Enceladus seems to be a natural for astrobiology. Cassini has already shown us that the geysers spewing out of the Saturnian moon’s south pole contain complex organic compounds, and I like what NASA astrobiologist Chris McKay has to say about the place:

“It just about ticks every box you have when it comes to looking for life on another world. It has got liquid water, organic material and a source of heat. It is hard to think of anything more enticing short of receiving a radio signal from aliens on Enceladus telling us to come and get them.”

A subterranean ocean with complex organic chemicals of the sort suggested by the Cassini findings should be an interesting place indeed, especially since it seems to rise close to the surface at the south pole, accounting for the material being vented into space along the ‘tiger stripes,’ long cracks in the crust. All this material is feeding Saturn’s E-ring which, if Enceladus were suddenly to switch off, would likely disappear. McKay calls the venting of water and organics into space ‘an open invitation to go there.’ 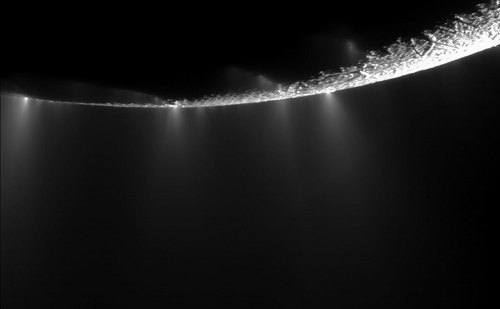 Image: Geysers at the south pole of Enceladus, as seen by Cassini in a November, 2009 flyby. Credit: NASA.

Answering the invitation would be the Enceladus Sample Return mission, a concept NASA scientists including McKay are putting together that would involve another Saturn orbiter, one that would make periodic flybys of Enceladus to collect plume samples that would eventually be returned to Earth. With Enceladus already pumping sub-surface material into space, a landing there becomes unnecessary. The Enceladus Sample Return mission builds on missions like Stardust, from which we gained expertise in retrieving sample materials from a comet’s tail. The mission is being designed to fit within the parameters of NASA’s Discovery program, which keeps the cost (without launch) at $500 million or below, about a fifth the price tag for Curiosity.

But not everyone agrees that a landing on Enceladus isn’t necessary. The German Aerospace Center (DLR) has been exploring concepts involving landing at the south pole and drilling through the ice. Its Enceladus Explorer would use an ice drill probe that would melt its way down to a depth of 100 to 200 meters to reach a water-bearing crevasse, sampling the liquid found there for microorganisms. A prototype of the device DLR is calling an IceMole has been used at the Morteratsch glacier in Switzerland and is soon to be tested in the Antarctic.

The complicated landing and drilling operation — not to mention the navigation issues faced by the IceMole as it moves through sub-surface ice — make operating the Enceladus Explorer look as risky as Curiosity’s landing on Mars. This excerpt from its project description online explains why the German team is anxious to put instrumentation on the moon’s surface and below:

…water rises to the surface through crevasses and fissures in the ice where it evaporates explosively and freezes instantly. The resulting ice fountains can shoot up to altitudes of several hundred kilometres before the ice particles slowly fall back to the moon’s surface. The microorganisms that could have evolved in the hypothetical ocean of liquid salt water under Enceladus’ icy crust, and have been swept away by the water spouting through the crevasses in the ice, would be extremely unlikely to survive; they would explode at the surface, and all that would remain are the organic compounds whose existence was verified by the Cassini spacecraft.

In other words, forget about microorganisms once they are exposed to the vacuum — all you will see are organic compounds. DLR’s IceMole, in contrast, would examine its samples in situ, sending results back to a base station on the surface that would also serve as the power source for the probe.

Would the chance to study actual living organisms give the edge to DLR’s proposal, or is a flyby the safer and cheaper alternative and the one we’re most likely to see achieved? Ideally we wind up with both missions funded, but no one would be so rash as to predict the mission choices likely from both NASA and ESA in a time of drastically reduced budgets. Let’s just say that Enceladus is staying in the news and that ingenious proposals are emerging for its study.

And it’s interesting to speculate on whether the IceMole technology being examined for DLR’s Enceladus Explorer might be adaptable to other interesting moons like Europa, Callisto or Ganymede. Each presents more problems than Enceladus, but a first-generation IceMole might some day grow into a far more powerful probe that could get a look at Europa’s deep ocean.