Into the Uncanny Valley

After our recent exchange of ideas on SETI, Michael Chorost went out and read the Strugatsky brothers’ novel Roadside Picnic, a book I had cited as an example of contact with extraterrestrials that turns out to be enigmatic and far beyond the human understanding. I’ve enjoyed the back and forth with Michael between Centauri Dreams and his World Wide Mind blog because I learn something new from him each time. In his latest post, Michael explains why incomprehensible technology isn’t really his thing.

A Sense of the Weird

Why? Michael grants the possibility that extraterrestrial intelligence may be far beyond our understanding. But in terms of science fiction and speculation in general, he favors what he calls ‘the uncanny valley,’ the sense of weirdness we get from a technology that is halfway between the incomprehensible and the known. A case in point is Piers Anthony’s novel Macroscope, in which an alien message overwhelms the minds of those who can understand it (people with IQs in the 150 range), causing some to go into a coma, some to die. Those of average intellect, unable to understand the message, remain unharmed by it.

The idea of a mind-destroying concept falls into the uncanny valley. It’s analogous to something we have, but it’s qualitatively, ungraspably better. It echoes Godel’s Theorem, which proves that it, the theorem itself, is unprovable. (I’m oversimplifying here.) A theorem that proves its own unprovability is a fascinating, mindbending thing. It upended mathematics when Godel published it in 1931. I have never understood it myself in a whole and complete moment of insight, and there’s a reason for that; it is fundamentally paradoxical. I can understand the pieces one at a time, but not the pieces put together. It gives me the feeling that if I ever did fully grasp all of it, my mind would be both much smarter, and broken. (Godel in fact went insane toward the end of his life.) The point is, we already know of ideas that probably exceed the mental capacity of most human beings. Macroscope invites us to consider the possibility that even higher-octane ideas would break our minds. 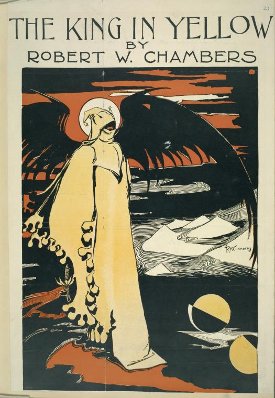 All of which brings to my mind Robert W. Chambers 1895 book The King in Yellow. Chambers was an artist and writer of considerable power. Indeed, Lovecraft biographer S. T. Joshi described The King in Yellow as a classic of supernatural literature, a sentiment echoed by science fiction bibliographer E. F. Bleiler. The book is a collection of unusual tales named after a play that becomes a theme in some, but not all of the stories. With Chambers you have truly entered into the uncanny valley, for when characters in his tales read the fictional play called The King in Yellow, they often go mad. The narrator reads the first act, throws the book into his fireplace and then, seeing the opening words of the second act, snatches it back and reads the entire volume, becoming possessed by its bizarre imagery.

When the French Government seized the translated copies which had just arrived in Paris, London, of course, became eager to read it. It is well known how the book spread like an infectious disease, from city to city, from continent to continent, barred out here, confiscated there, denounced by press and pulpit, censured even by the most advanced of literary anarchists. No definite principles had been violated in those wicked pages, no doctrine promulgated, no convictions outraged. It could not be judged by any known standard, yet, although it was acknowledged that the supreme note of art had been struck in The King in Yellow, all felt that human nature could not bear the strain, nor thrive on words in which the essence of purest poison lurked. The very banality and innocence of the first act only allowed the blow to fall afterward with more awful effect.

Image (above): A print by Robert Chambers illustrating his book The King in Yellow. Credit: New York Public Library/Art and Architecture Collection, Miriam and Ira D. Wallach Division of Art, Prints and Photographs.

Edgar Allen Poe’s ‘The Masque of the Red Death, with its decadent masquerade and spreading plague, was surely in Chambers’ mind when he wrote this. It’s chilling stuff, made all the more mysterious because the reader is left to fit the more prosaic tales in the volume into the larger themes of contact with a mighty force that can destroy the intellect. Not all the stories can be described as macabre but the feeling of strangeness persists, one that influenced H. P. Lovecraft and numerous later writers from James Blish, who set about writing a text for the mysterious play, to Raymond Chandler, who wrote a story of the same title using a narrator familiar with Chambers’ work.

Snaring the Mind in Language

But back to the extraterrestrial question, and the idea that contact may involve a deeply imperfect understanding of alien ideas that could be so powerful as to overwhelm our minds. What is it that could disrupt a human intellect? Michael Chorost talks about Shannon entropy as a way of working out the complexity of a message. That has me thinking about a Stephen Baxter story called “Turing’s Apples,” in which a signal has been received from the Eagle Nebula. We often think of such a signal being made as simple as possible so the beings behind it can communicate, but would they necessarily be communicating with us? What if we don’t get something simple, like a string of prime numbers, but an intercepted message intended for minds greater than our own?

In Baxter’s story, a SETI team has six years’ worth of data to work with. The signal technique is similar to terrestrial wavelength division multiplexing, with the signal divided into sections each roughly a kilohertz wide. Information theory says it is far more than just noise, but it defeats analysis. One character describes it as ‘More like a garden growing on fast-forward than any human data stream.’ The team has applied Shannon entropy analysis, which looks for relationships between signal elements. The method is straightforward:

You work out conditional probabilities: Given pairs of elements, how likely is it that you’ll see U following Q? Then you go on to higher-order ‘entropy levels,’ in the jargon, starting with triples: How likely is it to find G following I and N?

We can use mathematics, in other words, to work out the complexity of a language even if we can’t understand the language itself. That makes it possible to peg the languages dolphins use at third or fourth-order entropy, whereas human language gets up to about nine. In Baxter’s story, the mind-boggling SETI message weighs in with an entropy level around order thirty.

“It is information, but much more complex than any human language. It might be like English sentences with a fantastically convoluted structure — triple or quadruple negatives, overlapping clauses, tense changes.” He grinned. “Or triple entendres. Or quadruples.”

“They’re smarter than us.”

“Oh, yes. And this is proof, if we needed it, that the message isn’t meant specifically for us…. [T]he Eaglets are a new category of being for us. This isn’t like the Incas meeting the Spaniards, a mere technological gap. They had a basic humanity in common. We may find the gap between us and the Eaglets is forever unbridgeable…”

Chorost mentions Robert Sawyer’s WWW: Wake as containing a good discussion of Shannon entropy, which is why I’ve just acquired a copy. Meanwhile, the idea of a SETI message being so layered with meaning that we couldn’t possibly understand it does indeed put the chill down the spine that Chorost talks about, the same chill that Robert Chambers so effectively summons up in The King in Yellow, where language can suggest complexities that entangle the mind until merely human intellect overloads.