Starships: ‘Skylark’ vs. the Long Haul

Centauri Dreams readers will remember Adam Frank’s recent op-ed Alone in the Void in the New York Times arguing that given the difficulty involved in traveling to the stars, humans had better get used to living on and improving this planet. ‘We will have no other choice,’ wrote Frank. ‘There will be nowhere else to go for a very long time.’ I responded to Frank’s essay in Defending the Interstellar Vision, to which Frank replied on his NPR blog.

Dr. Frank is an astrophysicist at the University of Rochester and author of the highly regarded About Time: Cosmology and Culture at the Twilight of the Big Bang (Free Press, 2011), a study of our changing conception of time that is now nearing the top of my reading stack. In his short NPR post, he makes a compelling point:

Even if we could get a starship up to 10% of light speed (which would be an epoch-making achievement) then the round trip to the nearest known star with a planet would still take 300 years (it’s Gliese 876d for all you exoplanet fans). It’s hard to imagine a culture driving significant changes in a significant fraction of humanity based on three-century long shipping delays! As much as I support moving forward in interstellar research, I can’t escape the conclusion that the theater of our future — for at least a few thousand years — will be here in the solar system. Not forever, perhaps, but millennia at least. And that is a long, long time.

On balance, what we are really disagreeing about is time, my own view being that interstellar flight may be a matter of several centuries away, while Frank takes a longer view. In any case, it’s interesting to speculate on what a society would look like if that 10 percent of lightspeed turned out to be attainable but remained more or less a maximum for space travel. We’ll doubtless find closer worlds than those around Gl 876 (even now the evidence for at least one planet around Epsilon Eridani seems strong, and we’ll see about Alpha Centauri). But a nearby world around Alpha Centauri B is still forty-plus years away at 10 percent of c.

From a cultural perspective, the discussion of interstellar flight has suffered from extremes. I think about something Geoff Landis once told me while he, Marc Millis and I were having lunch at an Indian restaurant near Glenn Research Center in Cleveland. We had come over from GRC after I interviewed the two there and we spent an enjoyable meal talking lightsails and Bussard ramjets and science fiction. A skilled science fiction writer himself, Landis felt that the genre hadn’t always been kind to the serious study of interstellar topics. I quoted him on this in my Centauri Dreams book:

“Science fiction has made work on interstellar flight harder to sell because in the stories, it’s always so easy… Somebody comes up with a breakthrough and you can make interstellar ships that are just like passenger liners. In a way, that spoiled people, because they don’t understand how much work is going to be involved in traveling to the stars. It’s going to be hard. And it’s going to take a long time.” 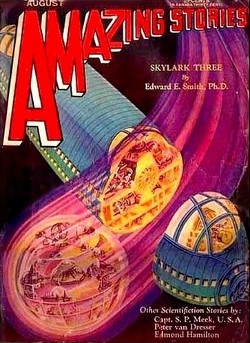 In Astounding Wonder (Univ. of Pennsylvania Press, 2012), John Cheng’s superb study of science fiction in the era between World War I and II, the author introduces Hugo Gernsback’s strategy of mingling science fact with fiction as a way into wonders that went beyond conventional physics. A case in point was Edward E. Smith’s ‘Skylark of Space’ series, published in Gernsback’s Amazing Stories in three installments in 1928. The tale, soon followed by popular sequels like ‘Skylark Three’ and ‘The Skylark of Valeron,’ went well beyond the science fiction of the period in its scale, invoking fast interstellar travel and a coming galactic civilization. Star travel mingled with romance and adventure to form ‘space opera.’

Here we can see Landis’ point at work, just as we can see it on the bridge of the Enterprise in the Star Trek franchise. Gernsback wanted to keep science in the forefront but he accepted a vehicle — the starship — that defied all understanding of physics at the time. To do this, Skylark author Smith had to come up with an explanation for how his ships flew, and Gernsback’s readers critiqued it even though the device in question was pure fantasy.

…Smith provided a detailed discussion in his original story about the ‘intra-atomic energy’ within copper that powered the Skylark. Nonetheless attempts at more contemporary or realistic extrapolations of science were not distinctive features of his narratives. Their operatic sensibilities came from their adventure, the immense scale of their universe, and their moral and ethical consideration, drawing on their scope and perspective, of universal value. In the broader context of achieving universal civilization throughout the galaxy, full knowledge of the details of Einstein’s special theory of relativity might have seemed relatively unimportant. Readers, however, criticized Smith’s stories for their improper science or lack of scientific consideration in purely imagined devices, however small, but not for their grandiose social extrapolations.

The Starship as Plot Device

If Smith’s science didn’t stand up, readers like future science fiction critic P. Schuyler Miller (who explained the Lorentz-Fitzgerald equations in Amazing’s letter column as a way of critiquing Smith) agreed that the tale was a thundering good read. In the same way, James T. Kirk and his descendants gave television viewers a feel for interstellar flight at warp speed, even though many of those enjoying the ride believed that such journeys could be nothing more than plot devices. It was only in the mid-20th Century, and really not until the 1960s, that a case began to be made that actual interstellar flight might be something more than a fantasy.

Of course, the kind of travel the early interstellar pioneers were talking about was nothing like Smith’s or Gene Roddenberry’s. I think Landis’ point stands up well — the reflex is to dismiss interstellar travel because our cultural representations of it have made it look absurdly easy. We’ve now learned that it is possible in principle to send a payload to another star within a human lifetime, but we also see that such journeys would take huge amounts of power and decades of time. Adam Frank is surely right that a society making this kind of journey wouldn’t be working with a cohesive set of colonies with convenient re-supply, but with outposts of humans that would be completely self-sustaining, a new and deeply isolated branch of the human family.

It’s an open question whether our species will choose to make journeys at 10 percent of c, or whether we’ll find ways to ramp up the speed to shorten travel times. Another open question is whether, if we really do find that a low percentage of lightspeed is the best we can attain, humans rather than artificial intelligence — ‘artilects’ — would be the likely crew of such vessels. One thing that is happening in the public perception of interstellar flight, though, is that the gradually more visible study of these topics is opening peoples’ eyes to the possibilities, and the difficulties, of interstellar journeys. A science fictional movie treatment of just how challenging a journey at 10 percent of lightspeed would be is a project worth exploring.