“The future never just happened, it was created.” The quote is from Will and Ariel Durant, the husband and wife team who collaborated on an eleven-volume history of civilization that always used to be included in Book of the Month deals, which is how many of us got our copies. I’m glad to see the Durants’ quotation brought into play by the 100 Year Starship organization in the service of energizing space exploration. It’s a call to create, to work, to push our ideas.

100 Year Starship (100YSS) puts the Durants’ thinking into practice at the second 100 Year Starship Public Symposium, September 13-16 at the Hyatt Regency in Houston. The event promises academic presentations, science fiction panels, workshops, classes and networking possibilities for those in the aerospace community and the public at large. My hope is that the gathering will kindle some of the same enthusiasm we saw last October in Orlando, when the grant from DARPA that created the 100 Year Starship had yet to be assigned and the halls of the Orlando Hilton filled up with starship aficionados. For more on the event, check the 100YSS symposium page. 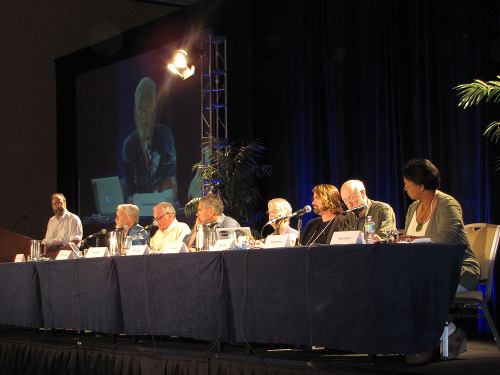 DARPA (the Defense Advanced Research Projects Agency) provided the seed money, but 100 Year Starship is now in the hands of Mae Jemison, whose Dorothy Jemison Foundation for Excellence will develop the idea with partners Icarus Interstellar (the people behind Project Icarus, the re-envisioning of the Project Daedalus starship) and the Foundation for Enterprise Development. And as we’ve discussed before, the 100 Year Starship refers not to a century-long star mission but to an organization that can survive for a century to nurture the starship idea, the thinking being that a century from now we will have made major progress on the interstellar front. It’s a gutsy and optimistic time frame and I hope it’s proven right.

The upcoming symposium will take place the week of the 50th anniversary of president Kennedy’s famous speech at Rice University exhorting Americans to land on the Moon, so it’s fitting that former president Bill Clinton has agreed to serve as honorary chair for the event. “This important effort helps advance the knowledge and technologies required to explore space,” said Clinton, “all while generating the necessary tools that enhance our quality of life on Earth.” 100YSS is collaborating with Rice University to integrate activities, which will include a salute to fifty years of human space flight at the Johnson Space Center.

The goal is for a multidisciplinary gathering, as a 100YSS news release makes clear:

100 Year Starship will bring in experts from myriad fields to help achieve its goal — utilizing not only scientists, engineers, doctors, technologists, researchers, sociologists and computer experts, but also architects, writers, artists, entertainers and leaders in government, business, economics, ethics and public policy. 100YSS will also collaborate with existing space exploration and advocacy efforts from both private enterprise and the government. In addition, 100YSS will establish a scientific research institute, The Way, whose major emphasis will be speculative, long-term science and technology.

The 2012 symposium is titled ‘Transition to Transformation…The Journey Begins.’ According to the organization, the goals for the gathering include:

I see that three track chairs have already been announced. David Alexander (Rice University) will be in charge of a special session on Future Visions, while Eric Davis (Institute for Advanced Studies – Austin) is to be track chair for Time-Distance Solutions. Amy Millman (Springboard Enterprises) chairs a special session called Interstellar Aspiration – Commercial Perspiration. More news on the other track chairs and session topics and papers as it becomes available.

The opportunity before us is to keep the Durants’ quotation in mind: “The future never just happened, it was created.” It’s true on the level of civilizations and on the level of individuals. I’m hoping you can create the opportunity to make it to Houston to see how 100 Year Starship is evolving and to join the scientists, engineers, public policy experts, entertainers and the rest who will be focusing on the issues of interstellar flight. These go well beyond propulsion to include life support, robotics, economics, intelligent systems, communications and more. If it’s anything like last year’s event in Orlando, this second symposium should help move interstellar studies forward.