Yesterday we pondered the possibility of detecting an interstellar craft as a new kind of SETI. If the energies needed to drive such a vessel are as titanic as we think, there could be a detectable signature, as Robert Zubrin pointed out in a 1995 paper. Zubrin’s best case in visible light involved an antimatter engine whose exhaust could be detected from as far as 300 light years from Earth. That would cover a huge number of stars, as 100,000 exist within 200 light years of our planet.

I suppose the classic starship detection occurs in Larry Niven and Jerry Pournelle’s 1975 novel The Mote in God’s Eye, where human starfarers using the ‘Alderson Drive’ — which allows instantaneous jumps between stars — detect an alien, laser-pushed lightsail. The starship is a throwback, an older technology that human interstellar methods have long superseded, one that contains a strange, asymmetric alien being, the first extraterrestrial humans have encountered. It’s no surprise to learn that Niven and Pournelle fine-tuned the laser lightsail idea through conversations with Robert Forward, who studied such concepts intensively in the scientific literature.

And then there’s Gregory Benford’s 2006 novelette about an astronomer who begins to suspect the anomalous object he’s looking at isn’t natural. Whereas Zubrin looked at antimatter, fusion, fission and magsails, Benford’s astronomer thinks he’s found something like a Bussard ramjet:

“What you wrote,” she said wonderingly. “It’s a…star ship?”

“Was. It got into trouble of some kind these last few days. That’s why the wake behind it – “ he tapped the Fantis’ image – “got longer. Then, hours later, it got turbulent, and—it exploded.”

She sipped her coffee. “This is…was…light years away?”

“Yes, and headed somewhere else. It was sending out a regular beamed transmission, one that swept around as the ship rotated, every 47 seconds.”

Her eyes widened. “You’re sure?”

The story is “Bow Shock,” which ran in Jim Baen’s Universe and is reprinted in Benford’s new collection Anomalies. Benford speculates that synchrotron radiation in the bow shock of a magnetically screened starship would be detectable at microwave and radio frequencies, and perhaps an easier catch than the torch of Zubrin’s antimatter spacecraft from a great distance. Ralph, Benford’s astronomer, had been examining what he thought was a runaway neutron star, ‘a faint finger in maps centered on the plane of the galaxy, just a dim scratch,’ and if we ever do make a starship detection, this could be more or less what we find, a changeable, ambiguous object. 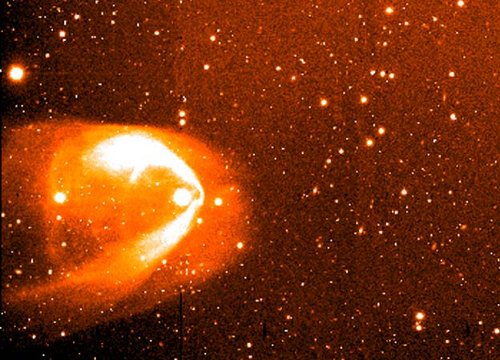 Image: Note the bow shock in the binary star system BZ Cam, created as the system moves through surrounding interstellar gas. In most cataclysmic variables, matter from a normal star accumulates on the surface of the companion white dwarf star, eventually causing a nova-like flare. In BZ Cam, however, light appears to flicker unpredictably, and an unusually large wind of particles is being expelled. BZ Cam lies about 2500 light-years away toward the constellation of Camelopardalis. Credit: R. Casalegno, C. Conselice et al., WIYN, NOAO, MURST, NSF.

A magnetic sail (‘magsail’) that deflects charged particles is also an interesting possibility. In his 1995 paper, Zubrin points out that a sail like this would be of value because it could decelerate a starship without the use of propellant, allowing it to brake against the stellar wind of the destination star. Here again we get a bow shock which will heat the interstellar medium to a degree dependent on the ship’s velocity, creating a plasma that will encounter the magnetic field of the magsail and produce radiation. This is an ingenious analysis — Zubrin, having gone through the equations governing the rate of deceleration of a magsail in the interstellar medium, notes the changes that occur as the velocity of the ship decreases and the bow shock heating begins to fall, causing the cyclotron radiation emitted by the bow shock to fall at the same time.

A large enough starship decelerating as it neared its destination should, according to Zubrin, put out emissions in the X-ray and radio ranges. Thus we get our starship signature: “The decline in bremsstrahlung energies and cyclotron frequencies in time in accord with the form of equation (2) [governing the rate of deceleration of the magsail] would be a dead giveaway that the emitting object was a decelerating magsail.” Governing the radiation emitted is the ship’s velocity and the density of ions in the interstellar medium. Zubrin calculates that at a density of 1 ion per cubic centimeter, a ship decelerating from a cruise velocity of 0.1 c will produce radiation at about 12 kHz.

Would we have a real chance at such a detection? From the paper:

It can be seen that the magsail radiation of a characteristic fusion starship being decelerated from a cruise velocity of 0.1c could be detected by a 6 km orbiting antenna from a distance of 400 light years, while that emitted by a characteristic antimatter photon rocket in its deceleration phase could be seen as far away as 2,000 light-years. There are about 100,000,000 stellar systems to be found within the latter distance. This extended range detection capability combined with magsail radiation’s unique time-dependent frequency spectrum appears to make a search for magsail radiation the most promising option for extraterrestrial starship detection.

You’ll recall that Zubrin estimated the characteristic mass of his ‘standard’ starship as 1,000,000 tons, something he describes as ‘a speculative guess.’ But even if the guess is off the mark, the idea of starship detection remains sound, in his view, because a decrease of ship mass by two orders of magnitude only decreases the detectability distance by one order of magnitude. We’re still looking at detecting a 10,000 ton starship (using a magsail) at 40 light years via a 6 km antenna, while a 30 km antenna could make the detection at a range of 200 light years.

Further thoughts on starship detection tomorrow. But let me add one note before closing: Al Jackson pointed out in the comments to yesterday’s post that Zubrin does not reference an important paper. It’s D. R. J. Viewing, C. Horswell, E. W. Palmer, “Detection of Starships,” JBIS, 30, 99-104 (1977), and it’s not one I’ve seen yet either. Because of that, let me quote Al:

The Viewing , et.al., paper looks at two kinds of starships, Innocuous and Energetic. Almost the same propulsion systems are considered as in Zubrin’s paper. That paper got me interested in what truly relativistic ships would look like in the simple case when a propulsion system does is not 100% efficient, and loses energy by waste heat. Suppose that in its rest frame it radiates isotropically. A simple relativistic kinematic effect will be that the radiation will be beamed relative to another rest frame. Called the ‘head light’ effect in special relativity. See: Correspondence: A. A. Jackson, IV, “Ultra-Relativistic Starships,” JBIS, 32, 240 (1979).

The Zubrin reference is “Detection of Extraterrestrial Civilizations via the Spectral Signature of Advanced Interstellar Spacecraft,” Progress in the Search for Extraterrestrial Life, ASP Conference Series Vol. 74 (1995). Available online.