A Planet Engulfed by a Red Giant?

Polish astronomer Aleksander Wolszczan (Penn State) is best known as the discoverer of the first confirmed planet outside our Solar System. That was back in the early 1990s, when Wolszczan was working with Dale Frail (NRAO), using observations from the Arecibo dish to demonstrate that the pulsar PSR B1257+12 was orbited by two planets. These are relatively small worlds (3.9 and 4.3 Earth masses respectively), and in an era where new planet candidates number in the thousands, it’s easy to forget how striking Wolszczan’s work appeared at the time, and how it gave impetus to the developing exoplanet hunt.

A pulsar planet looks to be an extremely inhospitable place, but learning how planets are distributed among the stars involves studying every conceivable kind of world. Wolszczan’s latest work targets an equally hostile environment, the former habitable zone of a star that has begun expanding into a red giant. The star, BD+48 740, has 11 times the Sun’s radius and is significantly older. Wolszczan and an international team of astronomers have been studying its chemical composition by way of figuring out events in its recent past. Using data gathered at the Hobby-Eberly Telescope (UT-Austin), they discovered that BD+48 740 contains an unusual amount of lithium, an element created primarily in the early days of the universe.

Finding lithium in such high amounts is a flag to the astronomer:

“Theorists have identified only a few, very specific circumstances, other than the Big Bang, under which lithium can be created in stars,” Wolszczan added. “In the case of BD+48 740, it is probable that the lithium production was triggered by a mass the size of a planet that spiraled into the star and heated it up while the star was digesting it.” 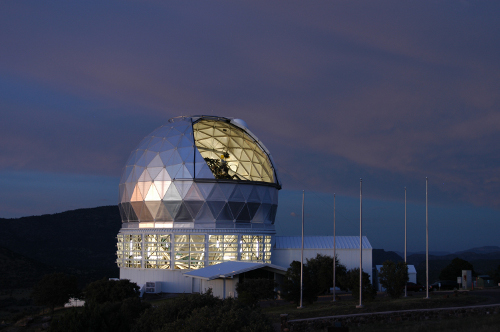 Image: The first evidence of a planet’s destruction by its aging star indicates that the missing planet was devoured as the star began expanding into a “red giant” — the stellar equivalent of advanced age. “A similar fate may await the inner planets in our solar system, when the Sun becomes a red giant and expands all the way out to Earth’s orbit some five-billion years from now,” said Alexander Wolszczan, Evan Pugh Professor of Astronomy and Astrophysics at Penn State and the discoverer of the first planet ever found outside our solar system. Credit: Marty Harris/McDonald Obs./UT-Austin.

The work on BD+48 740 is part of the Penn State-Toruń Planet Search, which specializes in detecting planetary systems around stars more evolved than the Sun. Some 50 red giants are currently known to host planets or brown dwarf companions, some of them (like HD 102272) in multi-planet systems. Although earlier phase sub-giants are found with ‘hot Jupiters’ orbiting them, the more evolved red giants show few planets in close orbits and few planets whose orbit is eccentric.

That makes the discovery of a long-period planet in a highly eccentric orbit around a red giant an interesting find. BD+48 740 is orbited by a planet of at least 1.6 Jupiter’s mass in such an orbit, one the researchers call the most elliptical planetary orbit yet detected around an evolved star. The culprit should be gravitational interactions between planets, and the suspicion is that the missing planet was the cause, its dive into the star giving the outer planet a gravitational boost.

The elliptical orbit of the newly discovered planet is not in itself enough to imply the engulfment of an inner planet. The paper on this work points out that we have studied planetary systems like HAT P-13 b, c and HD 217107 b, c, both systems around main sequence stars in which there is a close-in planet in a nearly circular orbit and a more distant companion in an eccentric orbit. But the lithium abundance in BD+48 740 suggests a missing planet and a recent planet-planet scattering event, one that would have occurred after the star had left the main sequence.

“Catching a planet in the act of being devoured by a star is an almost improbable feat to accomplish because of the comparative swiftness of the process, but the occurrence of such a collision can be deduced from the way it affects the stellar chemistry. The highly elongated orbit of the massive planet we discovered around this lithium-polluted red-giant star is exactly the kind of evidence that would point to the star’s recent destruction of its now-missing planet.”

The paper is M. Adamów at al., “BD+48 740 – Li overabundant giant star with a planet. A case of recent engulfment?” Accepted at Astrophysical Journal Letters (preprint). A Penn State news release on this work is also available.