Among the more interesting items coming out of the XXVIII General Assembly of the International Astronomical Union (IAU) in Beijing is news of a circumbinary system containing two planets. We’ve seen circumbinary worlds before — Kepler-16b is a planet orbiting not one but two stars, as are Kepler-34b and Kepler-35b. There was a time that the idea of a planet orbiting two stars, as opposed to orbiting one or the other of two stars in a binary system, seemed unlikely. Now we have a multiple-planet system in exactly this configuration.

It’s an interesting one, too. Some 4900 light years from Earth in the constellation Cygnus, the two stars orbit each other roughly every 7.5 days. One of the stars is fairly similar to the Sun, though about 15 percent less bright, while the other is an M-dwarf about a third of Sol’s size and 175 times fainter. Of the two planets, one — Kepler-47b — is three times the diameter of Earth and eight times its mass, orbiting the twin stars every 49 days. The outer planet — Kepler-47c — catches the eye because it orbits the stars every 303 days, placing it within the twin stars’ habitable zone.

To be sure, this looks to be a gas giant a bit larger than Uranus in size, with about 20 times the Earth’s mass. While not itself a candidate for habitability, its placement allows speculation that an exomoon around it could potentially hold life. The diagram below relates the Kepler-47 system to our own, with the two newly discovered worlds shown for comparison: 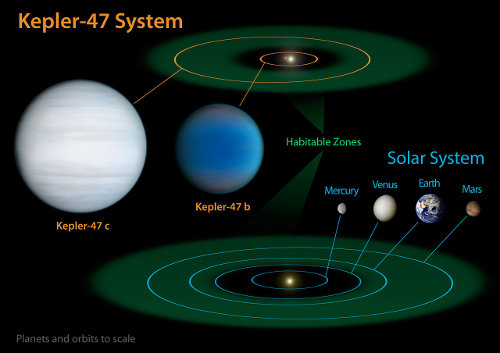 Jerome Orosz (San Diego State University), lead author of the study, notes the tricky nature of the observations that revealed the two worlds:

“In contrast to a single planet orbiting a single star, planets whirling around a binary system transit a moving target. The time intervals between the transits and their duration can vary substantially, from days to hours, and therefore the extremely precise and almost continuous observations with Kepler space telescope were fundamental.”

As this IAU news release notes, the loss of light caused by the eclipse is tiny. While Venus, for example, blocked out about 0.1 percent of the Sun’s surface during its most recent transit in June, Kepler-47b and c blocked out 0.08% and 0.2 percent respectively. Ground-based observations at McDonald Observatory (University of Texas at Austin) backed the Kepler data as the researchers studied the properties of this system. Michael Endl and colleagues studied the binary star with the 9.2-meter as well as the 2.7-meter instruments at McDonald.

“It’s Tatooine, right?” said Endl. “But this was not shown in Star Wars.” The astronomer was referring to the highly variable daylight that would fall upon a planet orbiting two stars. In fact, measurements of the stellar orbits told Endl’s team that daylight on the two planets would vary by a large margin over the 7.4 day period that the stars needed to complete their orbits. A closer look at the McDonald Observatory work can be found in this UT-Austin news release.

“The presence of a full-fledged circumbinary planetary system orbiting Kepler-47 is an amazing discovery. These planets are very difficult to form using the currently accepted paradigm, and I believe that theorists, myself included, will be going back to the drawing board to try to improve our understanding of how planets are assembled in dusty circumbinary disks.”