Small Town Among the Stars

As we’ve had increasing reason to speculate, travel to the stars may not involve biological life forms but robotics and artificial intelligence. David Brin’s new novel Existence (Tor, 2012) cartwheels through many an interstellar travel scenario — including a biological option involving building the colonists upon arrival out of preserved genetic materials — but the real fascination is in a post-biological solution. I don’t want to give anything away in this superb novel because you’re going to want to read it yourself, but suffice it to say that uploading a consciousness to an extremely small spacecraft is one very viable possibility.

So imagine a crystalline ovoid just a few feet long in which an intelligence can survive, uploaded from the original and, as far as it perceives, a continuation of that original consciousness. One of the ingenious things about this kind of spacecraft in Brin’s novel is that its occupants can make themselves large enough to observe and interact with the outside universe through the walls of their vessel, or small enough for quantum effects to take place, lending the enterprise an air of magic as they ‘conjure’ up habitats of choice and create scientific instruments on the fly. You may recall that Robert Freitas envisioned uploaded consciousness as a solution to the propulsion problem, with a large crew embedded in something the size of a sewing needle. 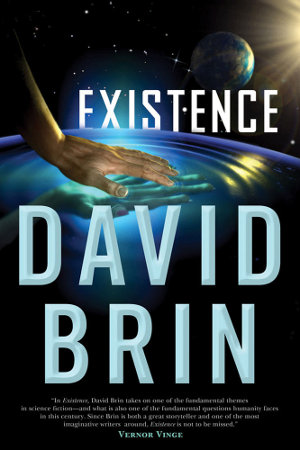 Brin’s interstellar solutions, of which there are many in this book, all involve a strict adherence to the strictures of Einstein, and anyone who has plumbed the possibilities of lightsails, fusion engines and antimatter will find much to enjoy here, with nary a warp-drive in sight. The big Fermi question looms over everything as we’re forced to consider how it might be answered, with first one and then many solutions being discarded as extraterrestrials are finally contacted, their presence evidently constant through much of the history of the Solar System. Brin’s between-chapter discussions will remind Centauri Dreams readers of many of the conversations we’ve had here on SETI and the repercussions of contact.

At the same time that I was finishing up Existence, I happened to be paging through the proceedings of NASA’s 1997 Breakthrough Propulsion Physics Workshop, which was held in Cleveland. I had read Frank Tipler’s paper “Ultrarelativistic Rockets and the Ultimate Fate of the Universe” so long ago that I had forgotten a key premise that relates directly to Brin’s book. Tipler makes the case that interstellar flight will take place with payloads weighing less than a single kilogram because only ‘virtual’ humans will ever be sent on such a journey.

Thinking of Brin’s ideas, I read the paper again with interest:

Carl Sagan explored the possibilities of time dilation through relativistic ramjets, noting that fast enough flight allowed a human crew to survive a journey all the way to the galactic core within a single lifetime (with tens of thousands of years passing on the Earth left behind). Tipler’s uploaded beings simply slow the clock speed at will to adjust their perceived time, making arbitrarily long journeys possible with the same ‘crew.’ The same applies to problems like acceleration, where experienced acceleration could be adjusted to simulate 1 gravity or less, even if the spacecraft were accelerating in a way that would pulverize a biological crew.

Tipler is insistent about the virtues of this kind of travel:

Since there is no difference between an emulation and the machine emulated, I predict that no real human will ever traverse interstellar space. Humans will eventually go to the stars, but they will go as emulations; they will go as virtual machines, not as real machines.

Brin’s universe is a good deal less doctrinaire. He’s reluctant to assume a single outcome to questions like these, and indeed the beauty of Existence is the fact that the novel explores many different solutions to interstellar flight, including the dreaded ‘berserker’ concept in which intelligent machines roam widely, seeking to destroy biological life-forms wherever found. We tend to think in terms of a single ‘contact’ with extraterrestrial civilization, probably through a SETI signal of some kind, but Brin dishes up a cluster of scenarios, each of which raises as many questions as the last and demands a wildly creative human response.

Thus Brin’s character Tor Povlov, a journalist terribly wounded by fire who creates a new life for herself online. Here she’s pondering what had once been known as the ‘Great Silence’:

Like some kind of billion-year plant, it seems that each living world develops a flower — a civilization that makes seeds to spew across the universe, before the flower dies. The seeds might be called ‘self-replicating space probes that use local resources to make more copies of themselves’ — though not as John Von Neumann pictured such things. Not even close.

In those crystal space-viruses, Von Neumann’s logic has been twisted by nature. We dwell in a universe that’s both filled with ‘messages’ and a deathly stillness.

Or so it seemed.

Only then, on a desperate mission to the asteroids, we found evidence that the truth is… complicated.

Complicated indeed. Read the book to find out more. Along the way you’ll encounter our old friend Claudio Maccone and his notions of exploiting the Sun’s gravitational lens, as well as Christopher Rose and Gregory Wright, who made the case for sending not messages but artifacts (‘messages in a bottle’) to make contact with other civilizations. It’s hard to think of a SETI or Fermi concept that’s not fodder for Brin’s novel, which in my view is a tour de force, the best of his many books. As for me, the notion of an infinitely adjustable existence aboard a tiny starship, one in which intelligence creates its own habitats on the fly and surmounts time and distance by adjusting the simulation, continues to haunt my thoughts.

Summer Evenings Aboard the Starship

For some reason Ray Bradbury keeps coming back to me. Imagine traveling to the stars while living in Green Town, Illinois, the site of Bradbury’s Dandelion Wine. If Clarke was right that a sufficiently advanced technology would be perceived as magic, then this is surely an example, as one of Brin’s characters muses while confronting a different kind of futuristic virtual reality:

Wizards in the past were charlatans. All of them. We spent centuries fighting superstition, applying science, democracy, and reason, coming to terms with objective reality… and subjectivity gets to win after all! Mystics and fantasy fans only had their arrow of time turned around. Now is the era when charms and mojo-incantations work, wielding servant devices hidden in the walls…

As if responding to Ika’s shouted spell, the hallway seemed to dim around Gerald. The gentle curve of the gravity wheel transformed into a hilly slope, as smooth metal assumed the textures of rough-hewn stone. Plastiform doorways seemed more like recessed hollows in the trunks of giant trees.

Splendid stuff, with a vivid cast of characters and an unexpected twist of humor. Are technological civilizations invariably doomed? If we make contact with extraterrestrial intelligence, how will we know if its emissaries are telling the truth? And why would they not? Is the human race evolutionarily changing into something that can survive? My copy of Existence (I read it on a Kindle) is full of underlinings and bookmarks, and my suspicion is that we’ll be returning to many of its ideas here in the near future.