Long journeys by spaceship are a staple of science fiction, but we know all too little about how to sustain a human habitat in a hostile environment. Experiments in closed ecosystems simply reveal how much work will have to go toward this subject before we can talk about moving out into the Solar System, much less sending missions outside of it. One experiment in this direction was Bios-3, conducted at the Institute of Biophysics in the Russian city of Krasnoyarsk. John Allen, himself deeply involved with the later Biosphere 2 project, called Bios-3 “something of a clandestine legend to the handful of people actually working on closed life systems.” 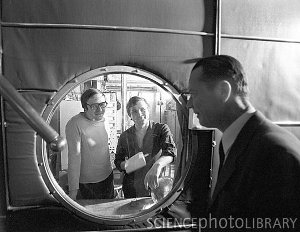 The thought behind Bios-3, which was completed in 1972, was to develop closed ecosystems that could support a crew of up to three in a 315 cubic meter space that would be divided into four areas, one designated for the crew, the others for growing food sources, with xenon lamps acting as the light source and power supplied by a nearby hydroelectric power station. Ten manned experiments, the longest involving a three man crew enclosed for 180 days, took place, with the facilities being used for testing until the mid-1980s. Work on self-contained environments continues at the larger International Center for Closed Ecosystems, which incorporated Bios-3 in 1991 and now works cooperatively with the European Space Agency.

Image: BIOS-3 experiment. Historical image of scientists in the Russian BIOS-3 station during a closed ecosystem experiment, while one of the experiment leaders, Vladimir Okladnikov, observes from the outside. The BIOS-3 facilities consisted of a 315-cubic-metre sealed habitat and were used to conduct manned experiments – the longest lasting 180 days (1972-1973). Chlorella algae were used to recycle the air breathed by the human inhabitants and two chambers were used to grow wheat and vegetables. Photographed on 30th January 1985. Credit: RIA NOVOSTI/Science Photo Library.

Some good news clearly emerged from Bios-3, though mixed with reminders of how far we have to go. The experiments used chlorella algae to recycle air, cultivating the chlorella under artificial light. It was found that 8 square meters of exposed chlorella were needed per person to create the right balance of oxygen and carbon dioxide, and even so, a thermo-catalytic filter had to be used to maintain it. Bios-3 leader Josef Gitelson commented on the results:

“Crew who stayed inside the complex for six months, did not manifest any signs of deterioration to their health, including no harmful effects to the microflora of their skin and mucous membranes, nor the contractions of any allergies from contact with the plants. Tests also reveal that the air, water and vegetable parts of the food did not lose their qualities while inside the complex.”

All of which is good news, but bear in mind that Bios-3 was not a truly isolated environment, bringing in some of its food from the outside and drawing energy from a separate source. The later Biosphere 2 experiment in Arizona was larger, including its own rainforest, ‘ocean’ and desert along with its agricultural areas and living space. Biosphere 2 involved two sealed missions, one running from 1991 to 1993, the other for six months in 1994. Problems included declining oxygen levels and fluctuating levels of carbon dioxide, with difficulties in controlling the internal temperature. At the same time, the crew of eight in the 1991 experiment, after almost two years inside, experienced a range of psychological as well as physical problems.

You can see the disconnect between many of the things we want to do in space and the unsettling questions raised by these attempts at closed ecosystems. In a recent article, futurist George Dvorsky noted that NASA’s “Roadmap to Settlement” study, completed in 2000, described future lunar habitats constructed beneath the Moon’s surface, with plans for solar panels, a nuclear power plant, and a variety of methods for extracting carbon, silicon and aluminum from the surface. The confirmation of water on the Moon — some 600 million tons worth at the Moon’s north pole — adds to the interest in creating a human presence there.

But we can’t do all this, or press on to Mars and beyond, without learning how to develop a functional biosphere that will be sustainable over a period of years. That puts the spotlight on renewing efforts like Bios-3 and Biosphere 2 with the same vigor we apply to future space missions. The fact that neither of the two major biosphere projects succeeded at creating a truly closed ecological system should be an incentive for pressing on with future experiments. Dvorsky notes that at the top of the list should be carbon dioxide management, maintenance of stable temperatures, avoidance of water acidification and an eye toward psychological issues.

Get some of these questions resolved and we can push further experiments in space, eventually leading to truly complex environments that could serve us well in the long term. Says Dvorsky:

Initially, these self-sufficient space stations should be kept simple — pilot projects to prove that humans can live off-planet and independent of Earth — an important precedent for any subsequent missions to space, or for colonization efforts to other terrestrial bodies.

And indeed, as time passes, these projects will have to assess the viability of more complex and long-term missions. As Ben Austen has warned, we could run into problems such as inbreeding. His solution, however, is to stock our habitats with DNA to expand upon the existing gene pool. More radically, colonists could take advantage of cybernetics, advanced genetic engineering practices, and life extension technologies to overcome these issues as they arise.

Dvorsky thinks testing closed ecological systems on the Moon is the logical forerunner to a permanent Mars presence, one that could pave the way for missions much deeper into the Solar System. Whatever the early roadmap is, self-sustainability becomes vital when we’re talking about environments too distant for ready re-supply from Earth. Just how close did we come with Bios-3 and Biosphere 2 in solving the closed system riddle? We won’t know until we get back into the game with similar experiments in preparation for self-reliant orbital habitats later in the century. We’ll also learn a lot more about preserving the biosphere we have here at home. 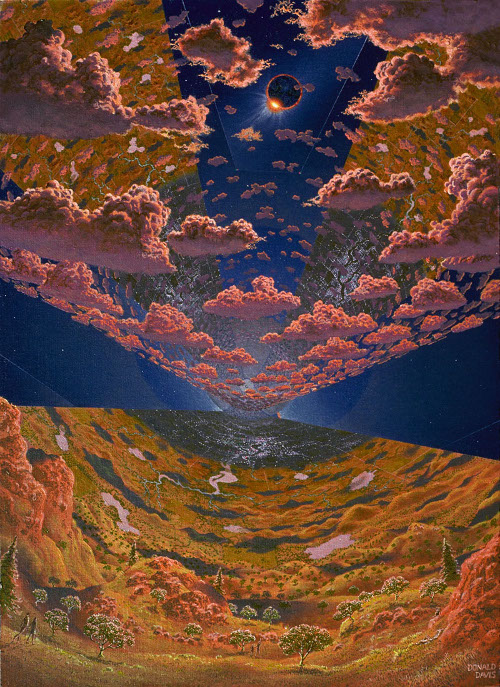 Image: The ultimate in closed habitats. This is a painting by Don Davis based on the giant ‘Model 3’ cylindrical habitats envisioned by Gerard O’Neill. Here Davis imagines the clouds forming at an ‘altitude’ around the rotation axis. As the artist says, “At this time the scene is bathed in the ruddy light of all the sunrises and sunsets on Earth at that moment as the colony briefly enters the Earths shadow, out at the L5 Lagrangian point where stable locations are easily maintained.” The complexity of such a creation dwarfs our early experiments and reminds us how much we have to learn about closed ecosystems. Credit: Don Davis.

Dvorsky mentions a Ben Austen article above, one that appeared in Popular Science back in 2011. Let me close with a quote from that piece that illustrates a vision of self-enclosed ecosystems fitting into the broader scheme of deep space exploration:

Designing closed-loop sustainable habitats could help us feed our poor; advanced propulsion methods might revolutionize Earth-bound transportation; space solar energy could radically reduce our dependence on fossil fuels; and a deeper understanding of asteroids might provide us with valuable resources and someday allow us to alter the orbit of one headed our way. Colonizing space “isn’t just about survival, it’s about thriving,” says Tau Zero’s Marc Millis, adding that there are still adventures out there to be had, that one could do valiant work for the common good. For Millis, the driving questions are simple: “What can we do that makes for an exciting future to live in? Something where when you wake up in the morning you’re glad to be alive and a human?”