Wrapping Up the Houston Starship 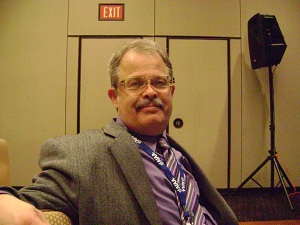 Because I utterly lack their skills, I have huge admiration for practical-minded people who can organize things well. Eric Davis’ work as track chair for the ‘Time and Distance Solutions’ track in Houston is a case in point. The challenge is in coping with a key fact of interstellar studies: We are so early in the game that we have not remotely figured out which propulsion method makes the most sense for journeys of this magnitude. Discussing time and distance means culling papers to find a balance of ideas, from what could be near-term (fusion, although it always seems near-term) to highly speculative (antimatter and nanotech).

Eric nailed the composition of the track, and it was because of that that I stayed in it through the conference. The temptation of getting involved with alternate tracks on ‘Becoming an Interstellar Civilization’ and especially ‘Destinations and Habitats’ was huge, but it was the time and distance problem that first drew me to interstellar studies so that is where I stayed. I’m hoping that Eric as well as several other track chairs will be able to offer their thoughts in future Centauri Dreams articles on how their sessions went.

Mae Jemison, who runs the 100 Year Starship organization, was everywhere, and I was beginning to wonder if she ever slept. She was in meetings all day Wednesday with the advisory council and later the track chairs, then in constant motion afterwards, a highly visible figure who never seemed to run out of energy. Gordon Gould and I asked her at lunch on Thursday about her flight aboard Endeavour in 1992, curious about what it is like to actually be blasted into space. We’ve all seen Shuttle launches and know how impressive, noisy and fearsome they can be.

But Mae said the effect was actually quite different. “You’re so wrapped up in padding and shielded from the noise that from inside, it’s just like being in the simulator. Remember that you have to hear all the communications inside the craft, so the noise seems very far away.” I had the same reaction a few months back when I asked Shuttle astronaut Drew Feistel, a veteran of Hubble Space Telescope repairs, whether that sweeping roll the Shuttle used to perform on liftoff was as dramatic from inside as it appeared to spectators. And the answer was no. Drew said you mostly felt acceleration, and that the roll maneuver felt very gradual and unobtrusive.

The job ahead of Mae’s group is, of course, enormous, and a huge part of that job will be to connect to a public that is both hamstrung by economic concerns and largely out of the kind of space mode we saw back in the Apollo days. My thought on that is that an organization like the 100 Year Starship can do a world of good by helping to get the word out about what interstellar issues really are. It’s surprising how few people realize the distances we’re talking about — when I first arrived in Houston, I cited in these pages the person who had emailed me with the question: “We’re already going to Pluto. How much harder can it be to go to a star?”

I gave a flip answer to that question in my earlier post, but it’s indicative of the mind-boggling nature of the time and distance conundrum and how little it is perceived by the public. I think we need to communicate how enormously challenging it will be to go to the stars at the same time that we provide a sound rationale for methodically looking at the problem. It is not using scare tactics to suggest that Earth’s history has been violent and that asteroid or comet impacts are not necessarily all in the past. And it is not being overly sanguine to say that the kind of solutions that will enable a crewed starship — maintaining sound ecologies, for example — are solutions that will have resonance on our own green planet and will help us to preserve it.

Spinoffs are always a touchy subject in spaceflight terms because they’re so easily ridiculed, and the average citizen is more likely to think of Tang than of GPS as a result of space research. But this is simply a hurdle that must be cleared for an organization with a 100-year mission to succeed. Learning how to propel a payload at a small percentage of lightspeed could have enormous ramifications for our production and use of energy on Earth, while the demand for autonomous systems will propel us into major advances in artificial intelligence and robotics. As one speaker noted, whether manned or not, a starship will demand autonomous systems. 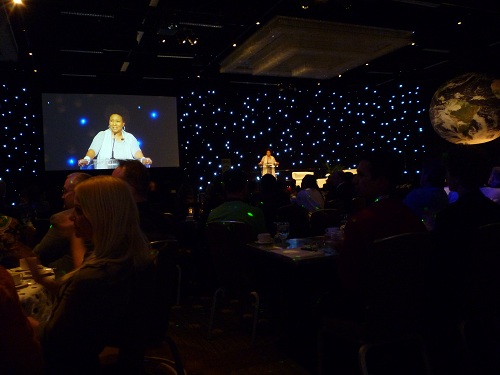 Into the Cosmic Sea

Let me close my Houston coverage with some thoughts about Jill Tarter. The SETI legend spoke to the symposium at large on Saturday in a short, inspiring talk outlining the search for Earth 2.0. We have yet to detect proof of an extraterrestrial civilization after 50 years of searching, but Tarter is doubling down on the need to keep looking given the small sample in our searches:

“Think about an Earth ocean as an analog. We’ve sampled the equivalent of one eight ounce glass out of that ocean in 50 years. Now you might get lucky and scoop up a fish when you do something like that, but chances are you wouldn’t. So our sample is small, inadequate. A cosmic ocean is out there beckoning us — the monumental task of sampling it remains… Our search must be audacious and inclusive. SETI trivializes the differences among us, and if it does nothing but expose every human being on the planet to this perspective, it will still have been one of the most significant events in human history.”

What might we pick up? Tarter said we will discover that Earth 2.0 in short order, meaning an Earth-mass planet in the habitable zone of a Sun-like star, but added that for it to truly be Earth 2.0, it will need to be inhabited. A technology we might detect could be anything from a beacon to a vast communications network, or perhaps huge shields against asteroid impacts or a completely unforeseen technology that could be generating radio or optical signals. “If we find technology, we can infer intelligence,” she added. “We can’t directly detect intelligence.”

Tarter’s message resonated with a crowd that, like her, believes we are a very young technology in a very old galaxy. A key question: Is it possible for a technological civilization to last for cosmic lengths of time? If the answer is no, Tarter believes SETI will fail, but of course we all hope the answer is yes. It was Philip Morrison, co-author of the first major paper on SETI, who called the idea “the archaeology of the future.” Sifting through the faint signals that impinge upon our dishes from the galaxy around us, we hope, unlike archaeologists, to find not just enigmatic remains but a living presence whose very existence will add meaning to our place in the cosmos. 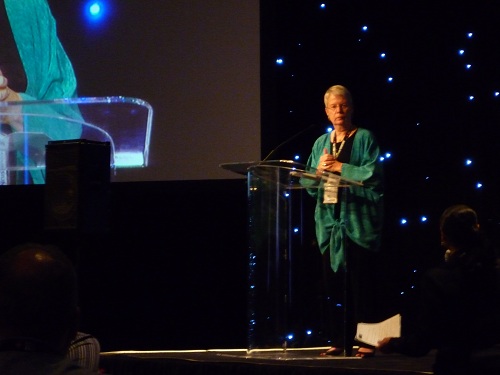 In going forward, both in SETI and in the 100 Year Starship initiative, I’m reminded of Mae Jemison’s quote from Bashō, the greatest poet of the Edo period in Japan. Bashō’s wanderings into unknown country made him a legend, giving him material for his work and renewed purpose. He had learned from experience the lesson he conveyed here: “Seek not to follow in the footsteps of men of old; seek what they sought.”