A Space Telescope Enmeshed in History

It’s been heartening to see renewed interest in the space program’s past. Neil Armstrong’s death surely had something to do with it, for the scattering of his ashes at sea, which occurred while the 100 Year Starship Symposium was in session, was a reminder of the dramatic days when public fascination with space was intense and the whole world rejoiced at Apollo 11’s success. The memorial ceremony held at the National Cathedral in Washington the day before had focused everyone’s gaze on that great mission, which remained in the air throughout, a continuing counterpoint to formal discussions and casual conversations in the hallways.

Larry Klaes has passed along another historical marker, the fact that today could be called the 60th anniversary of the interplanetary probe. As in so many eventful astronautical moments, the British Interplanetary Society was involved. Eric Burgess and C. A. Cross had come to a BIS meeting in 1952 to read a paper called “The Martian Probe,” which took the concept of an Earth satellite and extended it into a package of instruments that could be sent to Mars. Interestingly, this was at a time when Wernher von Braun was championing the huge manned expeditions that would be written up in Collier’s, along with Chesley Bonestell’s stunning artwork.

The Collier’s series began in March of 1952, and it’s likely that an unmanned probe wouldn’t have caught the eye nearly as well as the Olympian designs of von Braun as rendered by Bonestell’s talented brush. But small, realistic probes were in play in Burgess’ and Cross’ work that would lead to the later successes of Mariner, Venera and Voyager. A message from Paolo Ulivi on the FPSPACE mailing list speculates that it was this paper that began the use of ‘probe’ to refer to unmanned robotic craft. He wonders if this is true and perhaps readers here will know the answer.

If you want to see a bit of history, then, the Burgess and Cross paper appeared in a 1953 issue of the Journal of the British Interplanetary Society (Vol. 12, No. 2), and a subsequent lecture by Cross on ‘probe rockets’ was turned into a 1956 paper in JBIS (Vol. 16, No. 3). We can thus add yet another feather to the cap of BIS, the organization that studied moon landing missions as early as the 1930s and, of course, produced the first detailed study of a starship in Project Daedalus. As most readers of Centauri Dreams already know, JBIS has been at the forefront of interstellar studies for decades and we wish it continued success.

In the midst of the reflection on our past comes news from the B612 Foundation of what the organization is calling ‘major support’ from members of the business and financial community. The goal: To build, launch and operate a privately funded deep space mission called Sentinel. What B612 has in mind is placing a space telescope into a solar orbit up to 170 million miles from Earth, giving us a platform for discovering new asteroids and — as befits B612’s purpose — serving as an early warning mechanism for asteroids that could impact our planet.

On announcing the original mission in June of this year, B612’s CEO had this to say:

“The orbits of the inner solar system where Earth lies are populated with a half million asteroids larger than the one that struck Tunguska (June 30, 1908), and yet we’ve identified and mapped only about one percent of these asteroids to date, said Ed Lu, Space Shuttle, Soyuz, and Space Station Astronaut, now Chairman and CEO of the B612 Foundation. “During its 5.5-year mission survey time, Sentinel will discover and track half a million Near Earth Asteroids, creating a dynamic map that will provide the blueprint for future exploration of our Solar System, while protecting the future of humanity on Earth.” 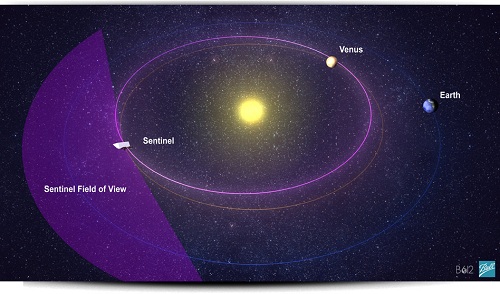 Image: Sentinel’s orbit and field of view. Credit: B612 Foundation.

The organization is saying that in its first weeks of operation, Sentinel will surpass the total of Earth-crossing asteroids catalogued in all previous efforts, and in five years of operation, relaying data to the Deep Space Network, it will track 100 times more asteroids than have been found by all other telescopes combined. The infrared space telescope is being developed at Ball Aerospace by the same team that developed the Spitzer and Kepler space telescopes, with launch aboard a SpaceX Falcon 9 currently planned for 2017-2018. The mission will perform a gravitational slingshot maneuver around Venus before settling into its final orbit around the Sun.

As we enter the age of commercial spaceflight, we can look back to the scientists, engineers and astronauts who made missions like these possible. It would be interesting to know whether Eric Burgess or C. A. Cross would have assumed probes like the ones descended from their model would emerge out of government or from private funding — we can remember the commercial streak in much science fiction of the era, like Heinlein’s “The Man Who Sold the Moon” (1950) in which the first lunar expedition is mounted by a businessman. Whatever the case, their probe ideas continue to resonate as private money now turns to deep space.