One of the challenges of explaining why a starship project is worth doing even though its final goal may not be realized for a long time is in showing how this work can have an impact on improving things on Earth. Technological spinoffs have acquired a bad name because of the stigma of Teflon and Tang — NASA hasn’t made the strongest case for how advanced work changes lives (and in any case, Teflon and Tang are not actually NASA spinoffs, though they are in the eyes of the public). But work in space can effect profound changes on Earth, and there is every reason to believe that energy breakthroughs in propulsion and power generation could be highly useful in solving our planet’s future energy demands. [See the comments for a recent change to this text]. 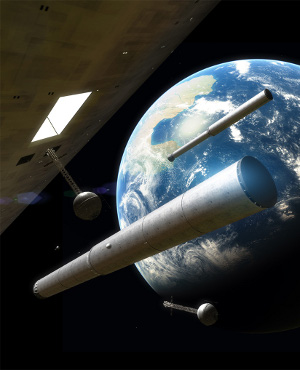 The list can obviously be expanded, as in the case of closed ecologies, which we’ve been talking about recently in these pages. A long-duration human mission demands attention to environments and their maintenance that will surely tell us much about preserving Earth’s ecosystems. Now I see that Rachel Armstrong, who works on sustainable environmental solutions using synthetic biology, is developing Project Persephone, an Icarus Interstellar initiative for the 100 Year Starship effort that looks at starship architecture and how it can best protect its inhabitants.

Armstrong is a TED Fellow whose work is multidisciplinary to the core. Indeed, it’s her view that “Scientists need to work outside their own areas of expertise to make new technologies that are pertinent to the 21st century and to collaborate, both with other scientific disciplines and the arts and humanities.” Synthetic biology can be considered the engineering of living systems. In an article for Discovery News, Armstrong explains that a ‘worldship’ — a vast craft that might take centuries or more to carry a human population to the stars — will need to behave as a supple and evolving ecology rather than as the kind of mechanistic system found in modern cities today.

Image: A worldship conceived as a vast cylinder, housing a self-contained ecology that may have to survive for centuries if not longer. A new project examines synthetic biology and sustainable architectures for such an effort. Credit: Adrian Mann.

That means thinking creatively about what the kind of materials we build with and what we ask them to do. Inert materials and industrial methods are what we are familiar with, but it’s Armstrong’s view that these practices create barriers rather than connections:

Perhaps it is possible to use the innate “force” of different kinds of materials to create an artificial nature, which can shape streams of material flow to create a living interior that is capable of regeneration and is not simply waiting to be consumed by its human colony. A material ecology may be feasible if the worldship itself was able to provide an external source of energy, so that the living interior would not be a closed system, but open — as if it had its own (nuclear) sun.

Just as metamaterials hold out the prospect of cheaper and lighter manufacture of large objects like telescope mirrors, synthetic biology may help us work with and adjust the numerous interactions that make up the support structure for a functioning community. Armstrong points to possibilities like using artificial soils and terrestrial micro-biota to seed a worldship’s ecology. Project Persephone will develop technical models that explore such systems and the infrastructures to support them.

Out of this, of course, may well come commercial products that can show us how to make our cities more livable. An ‘ecological architecture’ is one designed to “integrate our megacities with natural ecologies and strive for a new kind of ‘sustainability’ where, through the design of buildings, our civilization can return useful substances back to the environment, as well as consume them.”

Thus the end of the old industrial paradigm in favor of a complex, ecological approach to architecture and community design. A long-haul starship is the perfect experimental vehicle in which to model these concepts, for it’s a closed system that demands we apply the lessons we’ve learned from our own ecology in creating a sustainable living space for generations of crew. The growing interest in these matters is a demonstration of how many issues we’ve overlooked in favor of concentrating on the propulsion dilemma. Yet experiments in closed ecologies and synthetic biology can proceed in the near-term, with a technological spinoff that could quickly demonstrate the value of long-term approaches to basic human needs.

As for the name, Persephone was not only a goddess of the underworld but the goddess of spring growth, worshipped in the ancient world in the initiation ceremonies known as the Eleusinian Mysteries. The cult of Demeter (mother of Persephone) seems to have been in place in Mycenaean Greece if not before, offering its initiates passage to an paradisiacal afterlife. According to the legend, the abduction of Persephone by Hades prompted Demeter to search for her, setting up a reunion that marked the rebirth of plant life and the end of drought. Wrapped up in the Eleusinian mysteries, then, is the secret of the seasons, death and regeneration.

When I think about a starship whose living systems have grown critically out of balance, I think of Brian Aldiss’ Non-Stop, a 1958 novel published in the US as Starship. What appears to be a primitive tribe living a simple farming life turns out to be the descendants of a multi-generational starship crew returning from a planet around Procyon, the ship’s systems largely out of control. The new focus on closed systems and their management should spin off some interesting fiction of its own as the innovative ideas of a living architecture take hold. For more on synthetic biology and self-repairing architectures, you can see Rachel Armstrong’s 2009 TED talk here.