To Alpha Centauri via Hawai’i

I’m always looking for ways to relate interstellar distances to common objects on Earth, knowing that misunderstandings about the vast scale of the universe are common. Sir John Herschel (1792-1871) talked about dropping a pea off the side of a ship after every mile on an ocean voyage the distance of the nearest star, telling his readers that it would require ‘a fleet of 10,000 ships of 600 tons burthen, each starting with a full cargo of peas.’ Herschel was the first to try to measure the distance to Alpha Centauri, and while his numbers weren’t as accurate as ours, he captured for his era the disconnect between Earthly distances and the heavens. Larry Klaes weighs in this morning with yet another way to study the issue, using an exhibition on the interplanetary scale that has now been extended Herschel-style to the ultimate voyage.

Since its dedication in 1997, the Sagan Planet Walk has become a landmark feature of downtown Ithaca, New York. The various monuments, or “stations”, representing the major places in the Solar System from the Sun to Pluto serve first as a memorial to the late Cornell astronomer and science popularizer Carl Sagan. Perhaps best known for his Cosmos television series which premiered on PBS in 1980, Sagan passed away in December of 1996 at the age of 62 after two decades of teaching at the university. 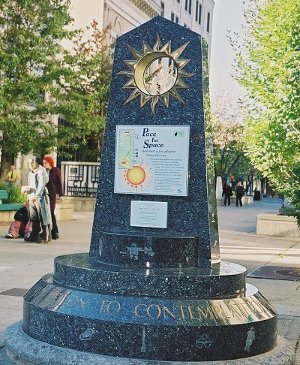 The Sagan Planet Walk also serves as a continuing educational tool about our celestial neighborhood. Among its astronomy informational features is the Walk’s physical demonstration of just how far apart objects in our Solar System really are on a scale that the general public can relate to. When reduced from its actual radius of five billion miles, the Solar System’s scale becomes clear in everyday terms. The gray marble Sun station resides prominently in the Ithaca Commons with the planets from Mercury to Mars nearby, while the Pluto station sits just outside the Ithaca Sciencenter nearly one mile away. The Sciencenter is the primary developer of the Sagan Planet Walk.

One question that has often been asked by folks who hiked the Sagan Planet Walk is just how far away the stars nearest to our Sun would be on this scale. The answer is that a station for this feature of the Walk would have to be located in tropical Hawai’i over five thousands miles west of temperate Ithaca. That is how far one would have to travel to reach the representation of our nearest suns, the Alpha Centauri system, which exists 4.3 light years away, or over 25 trillion miles across interstellar space.

A dedication ceremony to mark this newest and most distant addition to the Sagan Planet Walk will be held on September 28 at the ‘Imiloa Astronomy Center to coincide with the annual Polynesian Voyaging Festival at the hands-on science center, which focuses on astronomy and the culture of Polynesian voyaging. The features of the festival are to include presentations of double-hulled, ocean-going canoes, live demonstrations, and other activities that celebrate the proud heritage associated with centuries of Pacific Ocean crossings without instruments. Among those present at the dedication will be Charlie Trautmann, executive director of the Sciencenter and adjunct professor of engineering at Cornell.

While retaining the basic features common to all the stations of the Sagan Planet Walk – placards with interesting facts and a proportional model of each world that invites visitors “to contemplate the enormous, awe-inspiring scale of the Universe and our place within it” – the Alpha Centauri station also reflects the culture of its surroundings (Kamailehope is the Hawaiian name for Alpha Centauri).

The centerpiece of the exhibition is a large stone Hawaiian figure, sculpted in native Hawaiian volcanic stone by world-renowned Hawaiian artist Rocky Jensen. On either side of this sculpture are four graphic panels which detail the scale of the Solar System in both English and Hawaiian, the connection with the Sagan Planet Walk in Ithaca, and how the Alpha Centauri stars were utilized by Polynesian sailors to cross the Pacific in their open, double-hulled canoes without the need for astronomical tools. Native Hawaiian school children will learn about their heritage and the history of navigation thanks to an eight-foot wide circular star compass which completes the station. 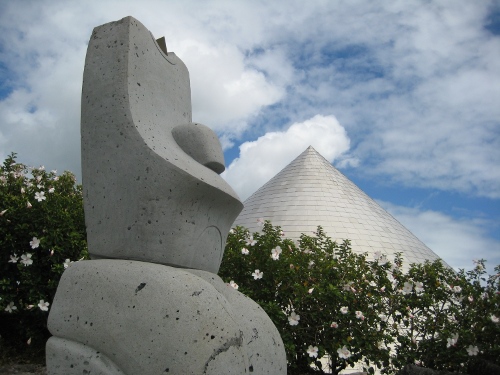 “The inclusion of the Alpha Centauri station has been fifteen years in the making, so we’re excited to see it coming to fruition and completing the Sagan Planet Walk,” said Teresa Smith, Public and Media Relations Manager at the Sciencenter.

The day after the Hawai’i dedication ceremony, the Sciencenter will hold its own celebration of the Sagan Planet Walk expansion to our nearest stellar neighbors by offering a free tour of the Walk, guided by Greg Sloan of Cornell’s Astronomy Department. Tour members will meet up at the Sun station on the Commons and make their way through the Solar System to the Pluto station at the Sciencenter, where prepared Hawaiian refreshments will await.

The newly expanded Sagan Planet Walk is now the largest such exhibition on Earth, measuring five thousand miles from end to end. This eclipses the previous record of 66 miles held by the artwork in the Stockholm, Sweden subway tunnels.