Super-Earths are exciting finds. The more of them we discover, the more likely it seems that life is abundant in the cosmos. But new work examining the viscosity and melting temperature of mantle rock is casting a different aura over super-Earths. Rather than being planets much like the Earth but simply more massive — worlds characterized by thick atmospheres, plate tectonics, volcanic activity and magnetic fields — they may differ in fundamental ways. With internal pressures tens of times higher than those found in Earth’s interior, large viscosities and melting temperatures could have adverse consequences on the planet’s habitability.

The potential effects extend as far as the core of the planet, which may not even exist. In a presentation at the European Planetary Science Congress on September 26, Vlada Stamenkovic (Massachusetts Institute of Technology) noted that the average super-Earth may in fact be undifferentiated; i.e., it may not have separated into a metallic core and a rocky mantle:

“Current understanding is that the terrestrial planets in our solar system formed rapidly — in about the first 50 million years. The time scale of core formation depends strongly on viscosity. The high melting temperatures and the large viscosities that we’ve calculated for super-Earths suggest either a slow core formation or no core formation at all. This raises doubts about whether super-Earths could generate magnetic fields.”

Without a liquid metallic core, a magnetic field that could play a role in protecting the atmosphere from solar particles would be unlikely. Moreover, plate tectonics are not inevitable on a super-Earth, a phenomenon that, along with volcanic activity, can play a role in regulating the climate during ice ages. Stamenkovic and team are looking at the effect of volcanic outgassing and the production of molten rock, which they believe decline with increasing planetary mass.

“Our work highlights the importance of understanding the thermal evolution of planets — moreover, it shows that super-Earths are more diverse than expected. We will only be able to fully answer questions by gathering more data from high-pressure experiments and from spectroscopic observations of super-Earth atmospheres orbiting close-by bright stars. Theory shows the possibilities, which are far larger than previously thought, but remains full of uncertainties,” said Stamenkovic. 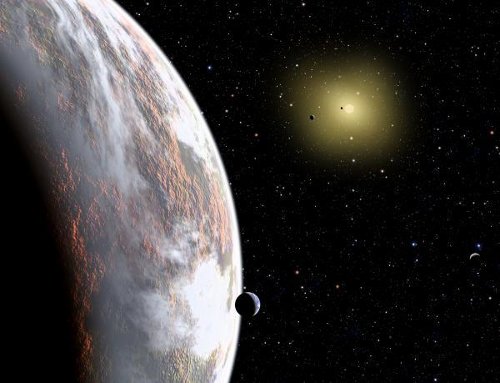 Image: A super-Earth like the one in this artist’s conception can grow twice as large as Earth with up to 10 times the mass. But would its thermal evolution make it a likely candidate for life? Credit: David A. Aguilar (Harvard-Smithsonian/CfA).

Even in a differentiated super-Earth, the researchers found that heat flow from the core can be limited by stagnant layers forming deep in the mantle, with conduction instead of convection becoming the primary form of heat transport, which would reduce the cooling rate of the core. We lack the data to make the call, but easy assumptions about super-Earths and habitability now have to contend with robust alternative scenarios.

Two papers coming out of this work are available: Stamenkovic, et al., “The influence of pressure-dependent viscosity on the thermal evolution of super-Earths,” Astrophysical Journal, 748:41 (20 March 2012) and Stamenkovic et al., “Thermal and transport properties of mantle rock at high pressure: Applications to super-Earths,” Icarus 216 (2011), 572-596. More in this European Planetary Science Congress news release.